1 And God remembered Noah, and every living thing, and all the cattle that was with him in the ark: and God made a wind to pass over the earth, and the waters asswaged;

2 The fountains also of the deep and the windows of heaven were stopped, and the rain from heaven was restrained;

3 And the waters returned from off the earth continually: and after the end of the hundred and fifty days the waters were abated.

4 And the ark rested in the seventh month, on the seventeenth day of the month, upon the mountains of Ararat.

6 And it came to pass at the end of forty days, that Noah opened the window of the ark which he had made:

7 And he sent forth a raven, which went forth to and fro, until the waters were dried up from off the earth.

8 Also he sent forth a dove from him, to see if the waters were abated from off the face of the ground;

10 And he stayed yet other seven days; and again he sent forth the dove out of the ark;

11 And the dove came in to him in the evening; and, lo, in her mouth was an olive leaf pluckt off: so Noah knew that the waters were abated from off the earth.

12 And he stayed yet other seven days; and sent forth the dove; which returned not again unto him any more.

13 And it came to pass in the six hundredth and first year, in the first month, the first day of the month, the waters were dried up from off the earth: and Noah removed the covering of the ark, and looked, and, behold, the face of the ground was dry.

14 And in the second month, on the seven and twentieth day of the month, was the earth dried.

15 And God spake unto Noah, saying,

19 Every beast, every creeping thing, and every fowl, and whatsoever creepeth upon the earth, after their kinds, went forth out of the ark.

21 And the LORD smelled a sweet savour; and the LORD said in his heart, I will not again curse the ground any more for man's sake; for the imagination of man's heart is evil from his youth; neither will I again smite any more every thing living, as I have done.

22 While the earth remaineth, seedtime and harvest, and cold and heat, and summer and winter, and day and night shall not cease.

God remembers Noah, and dries up the waters. (1-3) The ark rests on Ararat, Noah sends forth a raven and a dove. (4-12) Noah being commanded, goes out of the ark. (13-19) Noah offers sacrifice, God promises to curse the earth no more. (20-22)1-3 The whole race of mankind, except Noah and his family, were now dead, so that God's remembering Noah, was the return of his mercy to mankind, of whom he would not make a full end. The demands of Divine justice had been answered by the ruin of sinners. God sent his wind to dry the earth, and seal up his waters. The same hand that brings the desolation, must bring the deliverance; to that hand, therefore, we must ever look. When afflictions have done the work for which they are sent, whether killing work or curing work, they will be taken away. As the earth was not drowned in a day, so it was not dried in a day. God usually works deliverance for his people gradually, that the day of small things may not be despised, nor the day of great things despaired of.

4-12 The ark rested upon a mountain, whither it was directed by the wise and gracious providence of God, that might rest the sooner. God has times and places of rest for his people after their tossing; and many times he provides for their seasonable and comfortable settlement, without their own contrivance, and quite beyond their own foresight. God had told Noah when the flood would come, yet he did not give him an account by revelation, at what times and by what steps it should go away. The knowledge of the former was necessary to his preparing the ark; but the knowledge of the latter would serve only to gratify curiosity; and concealing it from him would exercise his faith and patience. Noah sent forth a raven from the ark, which went flying about, and feeding on the carcasses that floated. Noah then sent forth a dove, which returned the first time without good news; but the second time, she brought an olive leaf in her bill, plucked off, plainly showing that trees, fruit trees, began to appear above water. Noah sent forth the dove the second time, seven days after the first, and the third time was after seven days also; probably on the sabbath day. Having kept the sabbath with his little church, he expected especial blessings from Heaven, and inquired concerning them. The dove is an emblem of a gracious soul, that, finding no solid peace of satisfaction in this deluged, defiling world, returns to Christ as to its ark, as to its Noah, its rest. The defiling world, returns to Christ as to its ark, as to its Noah, its rest. The carnal heart, like the raven, takes up with the world, and feeds on the carrion it finds there; but return thou to my rest, O my soul; to thy Noah, so the word is, #Ps 116:7|. And as Noah put forth his hand, and took the dove, and pulled her to him, into the ark, so Christ will save, and help, and welcome those that flee to him for rest.

13-19 God consults our benefit, rather than our desires; he knows what is good for us better than we do for ourselves, and how long it is fit our restraints should continue, and desired mercies should be delayed. We would go out of the ark before the ground is dried; and perhaps, if the door, is shut, are ready to thrust off the covering, and to climb up some other way; but God's time of showing mercy is the best time. As Noah had a command to go into the ark, so, how tedious soever his confinement there was, he would wait for a command to go out of it again. We must in all our ways acknowledge God, and set him before us in all our removals. Those only go under God's protection, who follow God's direction, and submit to him.

20-22 Noah was now gone out into a desolate world, where, one might have thought, his first care would have been to build a house for himself, but he begins with an alter for God. He begins well, that begins with God. Though Noah's stock of cattle was small, and that saved at great care and pains, yet he did not grudge to serve God out of it. Serving God with our little is the way to make it more; we must never think that is wasted with which God is honoured. The first thing done in the new world was an act of worship. We are now to express our thankfulness, not by burnt-offerings, but by praise, and pious devotions and conversation. God was well pleased with what was done. But the burning flesh could no more please God, than the blood of bulls and goats, except as typical of the sacrifice of Christ, and expressing Noah's humble faith and devotedness to God. The flood washed away the race of wicked men, but it did not remove sin from man's nature, who being conceived and born in sin, thinks, devises, and loves wickedness, even from his youth, and that as much since the flood as before. But God graciously declared he never would drown the world again. While the earth remains, and man upon it, there shall be summer and winter. It is plain that this earth is not to remain always. It, and all the works in it, must shortly be burned up; and we look for new heavens and a new earth, when all these things shall be dissolved. But as long as it does remain, God's providence will cause the course of times and seasons to go on, and makes each to know its place. And on this word we depend, that thus it shall be. We see God's promises to the creatures made good, and may infer that his promises to all believers shall be so.

Need Prayer? Let us pray for you... 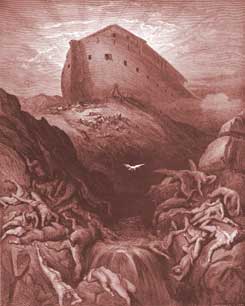 A Dove Is Sent Forth from the Ark