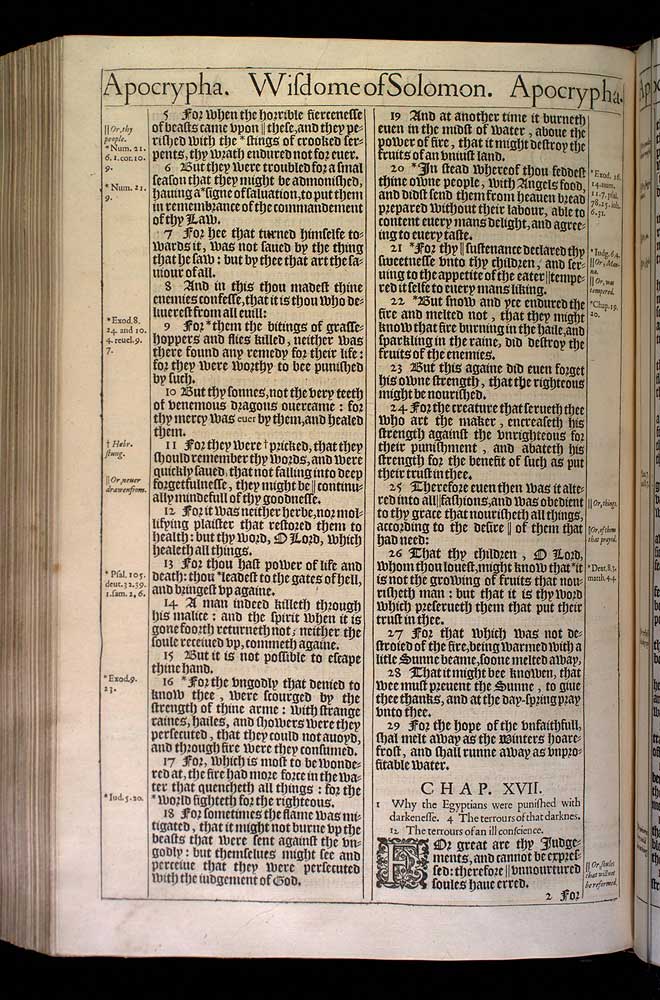 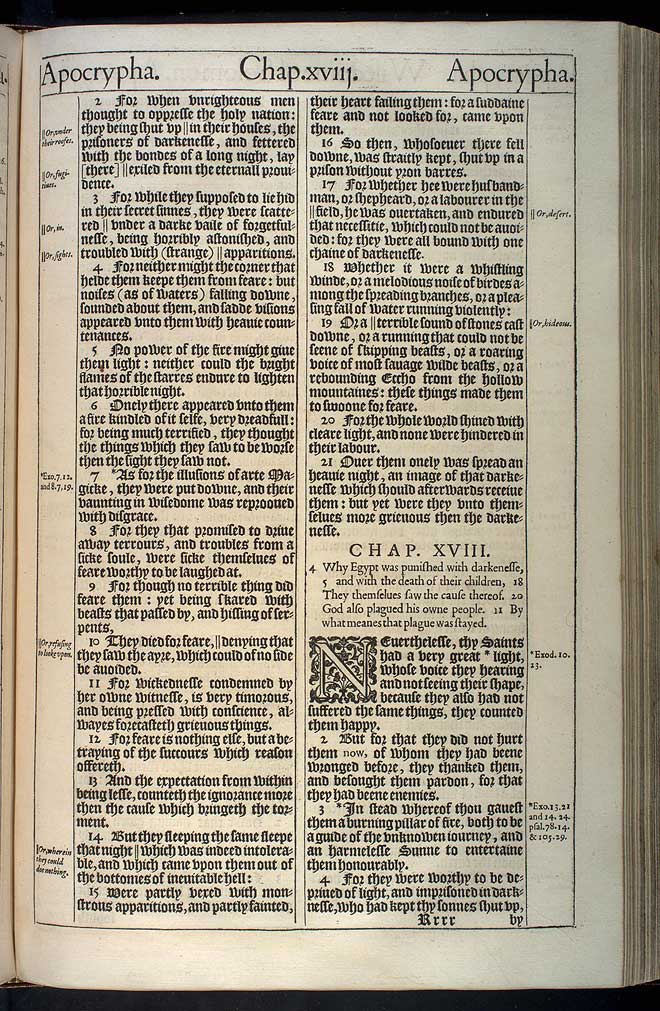 View this Wisedome chapter 17 scan at a larger size

1 For great are thy Iudgements, and cannot be expressed: therefore vnnourtured soules haue erred.1

2 For when vnrighteous men thought to oppresse the holy nation: they being shut vp in their houses, the prisoners of darkenesse, and fettered with the bondes of a long night, lay [there] exiled from the eternall prouidence.2

3 For while they supposed to lie hid in their secret sinnes, they were scattered vnder a darke vaile of forgetfulnesse, being horribly astonished, and troubled with (strange) apparitions.3

4 For neither might the corner that helde them keepe them from feare: but noises (as of waters) falling downe, sounded about them, and sadde visions appeared vnto them with heauie countenances.

5 No power of the fire might giue them light: neither could the bright flames of the starres endure to lighten that horrible night.

6 Onely there appeared vnto them a fire kindled of it selfe, very dreadfull: for being much terrified, they thought the things which they saw to be worse then the sight they saw not.

7 As for the illusions of arte Magicke, they were put downe, and their vaunting in wisedome was reprooued with disgrace.7

8 For they that promised to driue away terrours, and troubles from a sicke soule, were sicke themselues of feare worthy to be laughed at.

9 For though no terrible thing did feare them: yet being skared with beasts that passed by, and hissing of serpents,

10 They died for feare, denying that they saw the ayre, which could of no side be auoided.10

11 For wickednesse condemned by her owne witnesse, is very timorous, and being pressed with conscience, alwayes forecasteth grieuous things.

12 For feare is nothing else, but a betraying of the succours which reason offereth.

13 And the expectation from within being lesse, counteth the ignorance more then the cause which bringeth the torment.

14 But they sleeping the same sleepe that night which was indeed intolerable, and which came vpon them out of the bottomes of ineuitable hell:14

15 Were partly vexed with monstrous apparitions, and partly fainted, their heart failing them: for a suddaine feare and not looked for, came vpon them.

16 So then, whosoeuer there fell downe, was straitly kept, shut vp in a prison without yron barres.

17 For whether hee were husbandman, or shepheard, or a labourer in the field, he was ouertaken, and endured that necessitie, which could not be auoided: for they were all bound with one chaine of darkenesse.17

18 Whether it were a whistling winde, or a melodious noise of birdes among the spreading branches, or a pleasing fall of water running violently:

19 Or a terrible sound of stones cast downe, or a running that could not be seene of skipping beasts, or a roaring voice of most sauage wilde beasts, or a rebounding Eccho from the hollow mountaines: these things made them to swoone for feare.19

20 For the whole world shined with cleare light, and none were hindered in their labour.

21 Ouer them onely was spread an heauie night, an image of that darkenesse which should afterwards receiue them: but yet were they vnto themselues more grieuous then the darkenesse.