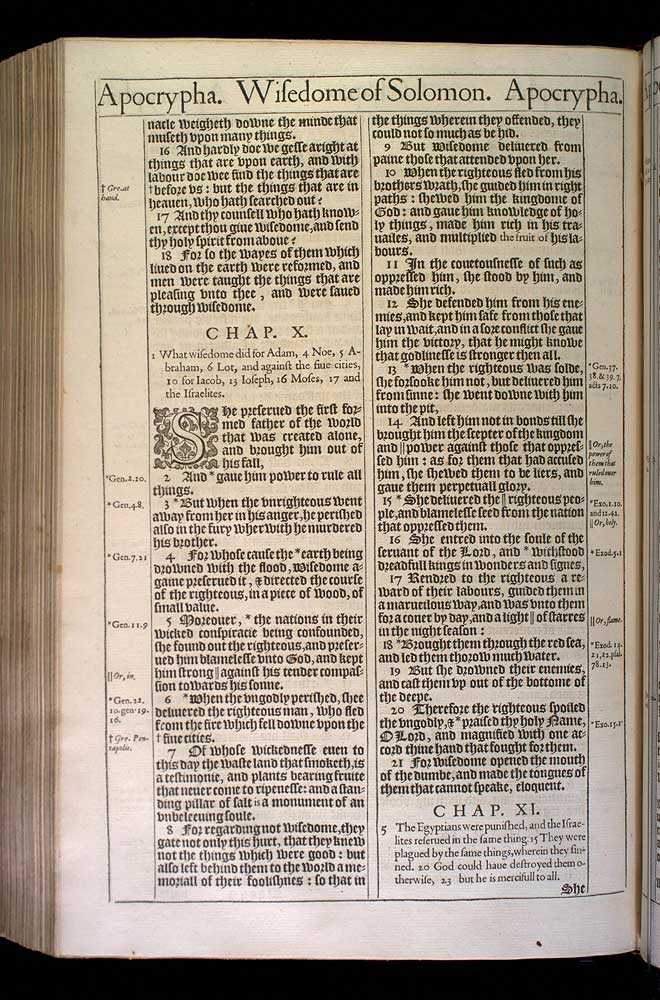 View this Wisedome chapter 10 scan at a larger size

1 She preserued the first formed father of the world that was created alone, and brought him out of his fall,

2 And gaue him power to rule all things.2

3 But when the vnrighteous went away from her in his anger, he perished also in the fury wherwith he murdered his brother.3

4 For whose cause the earth being drowned with the flood, Wisedome againe preserued it, & directed the course of the righteous, in a piece of wood, of small value.4

5 Moreouer, the nations in their wicked conspiracie being confounded, she found out the righteous, and preserued him blamelesse vnto God, and kept him strong against his tender compassion towards his sonne.5

6 When the vngodly perished, shee deliuered the righteous man, who fled from the fire which fell downe vpon the fiue cities.6

7 Of whose wickednesse euen to this day the waste land that smoketh, is a testimonie, and plants bearing fruite that neuer come to ripenesse: and a standing pillar of salt is a monument of an vnbeleeuing soule.

8 For regarding not wisedome, they gate not only this hurt, that they knew not the things which were good: but also left behind them to the world a memoriall of their foolishnes: so that in the things wherein they offended, they could not so much as be hid.

9 But Wisedome deliuered from paine those that attended vpon her.

10 When the righteous fled from his brothers wrath, she guided him in right paths: shewed him the kingdome of God: and gaue him knowledge of holy things, made him rich in his trauailes, and multiplied the fruit of his labours.

11 In the couetousnesse of such as oppressed him, she stood by him, and made him rich.

12 She defended him from his enemies, and kept him safe from those that lay in wait, and in a sore conflict she gaue him the victory, that he might knowe that godlinesse is stronger then all.

13 When the righteous was solde, she forsooke him not, but deliuered him from sinne: she went downe with him into the pit,13

14 And left him not in bonds till she brought him the scepter of the kingdom and power against those that oppressed him: as for them that had accused him, she shewed them to be liers, and gaue them perpetuall glory.14

15 She deliuered the righteous people, and blamelesse seed from the nation that oppressed them.15

16 She entred into the soule of the seruant of the Lord, and withstood dreadfull kings in wonders and signes,16

17 Rendred to the righteous a reward of their labours, guided them in a marueilous way, and was vnto them for a couer by day, and a light of starres in the night season:17

18 Brought them through the red sea, and led them thorow much water.18

19 But she drowned their enemies, and cast them vp out of the bottome of the deepe.

20 Therefore the righteous spoiled the vngodly, & praised thy holy Name, O Lord, and magnified with one accord thine hand that fought for them.20

21 For wisedome opened the mouth of the dumbe, and made the tongues of them that cannot speake, eloquent.