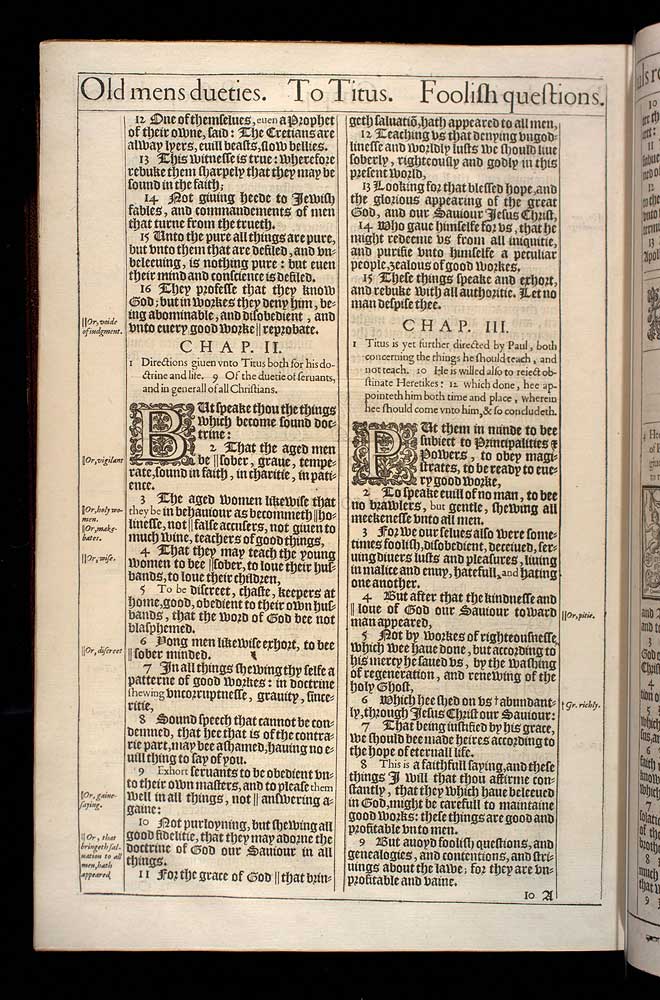 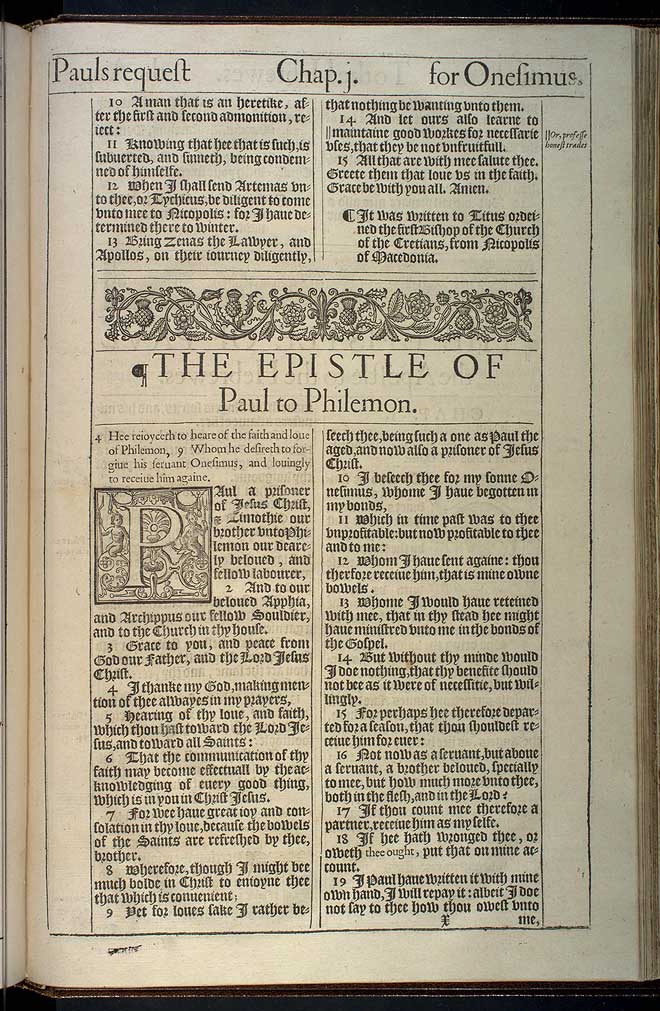 View this Titus chapter 3 scan at a larger size

1 Titus is yet further directed by Paul, both concerning the things he should teach, and not teach. 10 He is willed also to reiect obstinate Heretikes: 12 which done, hee appointeth him both time and place, wherein hee should come vnto him, & so concludeth.

1 Put them in minde to bee subiect to Principalities & Powers, to obey magistrates, to be ready to euery good worke,

2 To speake euill of no man, to bee no brawlers, but gentle, shewing all meekenesse vnto all men.

3 For we our selues also were sometimes foolish, disobedient, deceiued, seruing diuers lusts and pleasures, liuing in malice and enuy, hatefull, and hating one another.

4 But after that the kindnesse and loue of God our Sauiour toward man appeared,4

5 Not by workes of righteousnesse which wee haue done, but according to his mercy he saued vs, by the washing of regeneration, and renewing of the holy Ghost,

6 Which hee shed on vs abundantly, through Iesus Christ our Sauiour:6

7 That being iustified by his grace, we should bee made heires according to the hope of eternall life.

8 This is a faithfull saying, and these things I will that thou affirme constantly, that they which haue beleeued in God, might be carefull to maintaine good works: these things are good and profitable vnto men.

9 But auoyd foolish questions, and genealogies, and contentions, and striuings about the lawe; for they are vnprofitable and vaine.

10 A man that is an heretike, after the first and second admonition, reiect:

11 Knowing that hee that is such, is subuerted, and sinneth, being condemned of himselfe.

12 When I shall send Artemas vnto thee, or Tychicus, be diligent to come vnto mee to Nicopolis: for I haue determined there to winter.

13 Bring Zenas the Lawyer, and Apollos, on their iourney diligently, that nothing be wanting vnto them.

14 And let ours also learne to maintaine good workes for necessarie vses, that they be not vnfruitfull.14

15 All that are with mee salute thee. Greete them that loue vs in the faith. Grace be with you all. Amen. [It was written to Titus ordeined the first Bishop of the Church of the Cretians, from Nicopolis of Macedonia.]