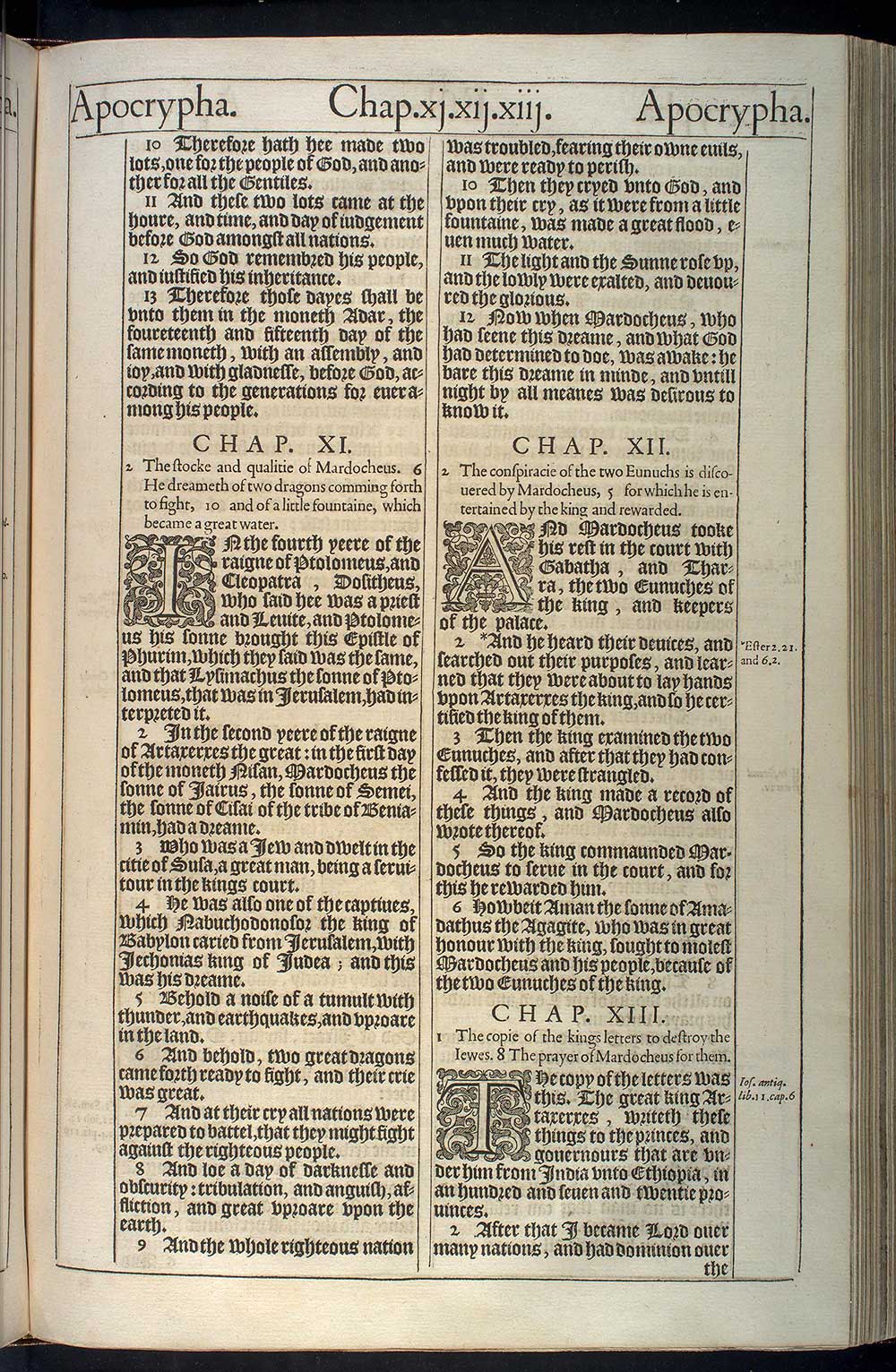 2 The stocke and qualitie of Mardocheus. 6 He dreameth of two dragons comming forth to fight, 10 and of a little fountaine, which became a great water.

1In the fourth yeere of the raigne of Ptolomeus, and Cleopatra, Dositheus, who said hee was a priest and Leuite, and Ptolomeus his sonne brought this Epistle of Phurim, which they said was the same, and that Lysimachus the sonne of Ptolomeus, that was in Ierusalem, had interpreted it.

2In the second yeere of the raigne of Artaxerxes the great: in the first day of the moneth Nisan, Mardocheus the sonne of Iairus, the sonne of Semei, the sonne of Cisai of the tribe of Beniamin, had a dreame.

3Who was a Iew and dwelt in the citie of Susa, a great man, being a seruitour in the kings court.

4He was also one of the captiues, which Nabuchodonosor the king of Babylon caried from Ierusalem, with Iechonias king of Iudea; and this was his dreame.

5Behold a noise of a tumult with thunder, and earthquakes, and vproare in the land.

6And behold, two great dragons came forth ready to fight, and their crie was great.

7And at their cry all nations were prepared to battel, that they might fight against the righteous people.

8And loe a day of darknesse and obscurity: tribulation, and anguish, affliction, and great vproare vpon the earth.

9And the whole righteous nation was troubled, fearing their owne euils, and were ready to perish.

10Then they cryed vnto God, and vpon their cry, as it were from a little fountaine, was made a great flood, euen much water.

11The light and the Sunne rose vp, and the lowly were exalted, and deuoured the glorious.

12Now when Mardocheus, who had seene this dreame, and what God had determined to doe, was awake: he bare this dreame in minde, and vntill night by all meanes was desirous to know it.

* Courtesy of Rare Book and Manuscript Library, University of Pennsylvania