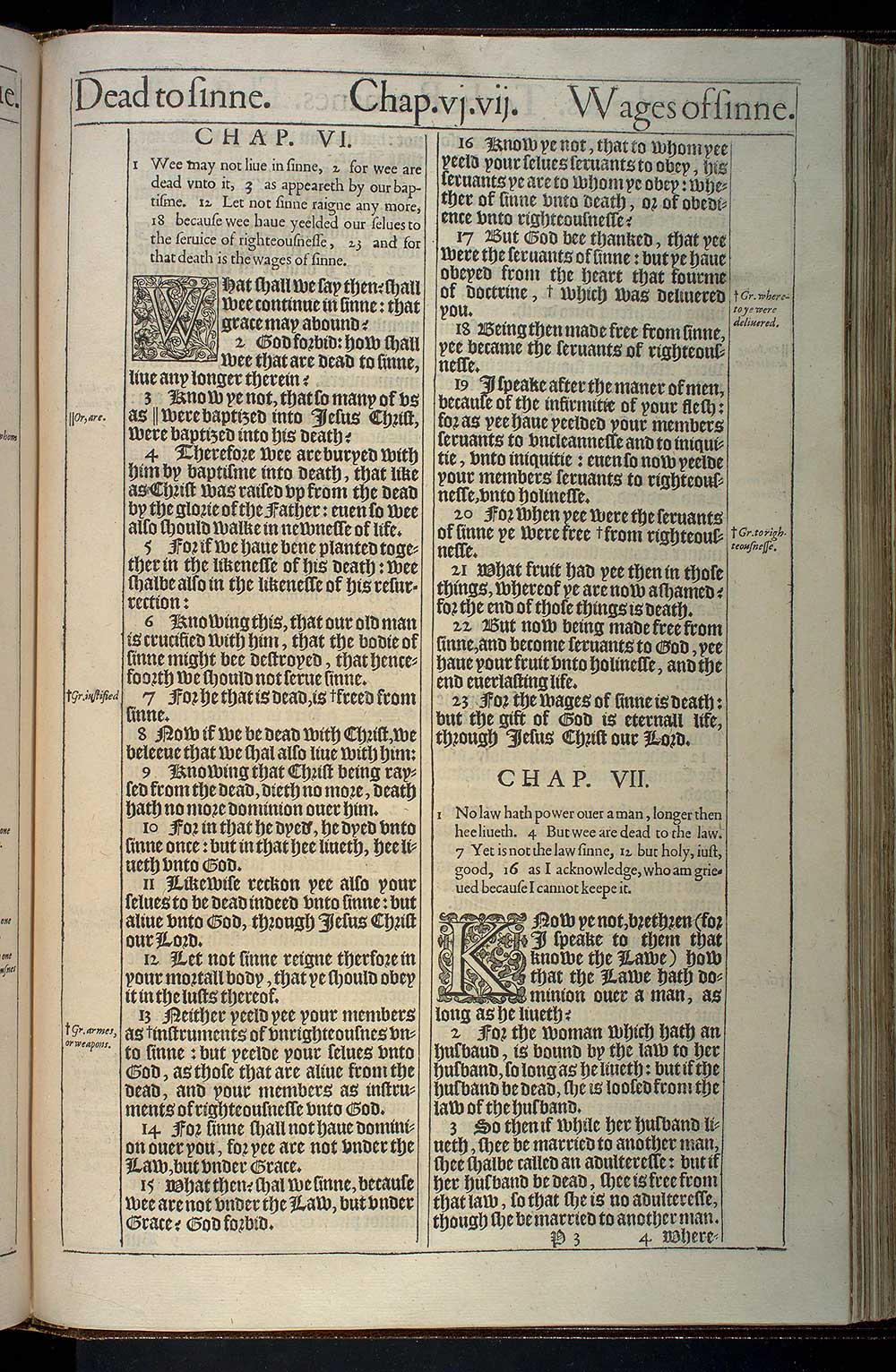 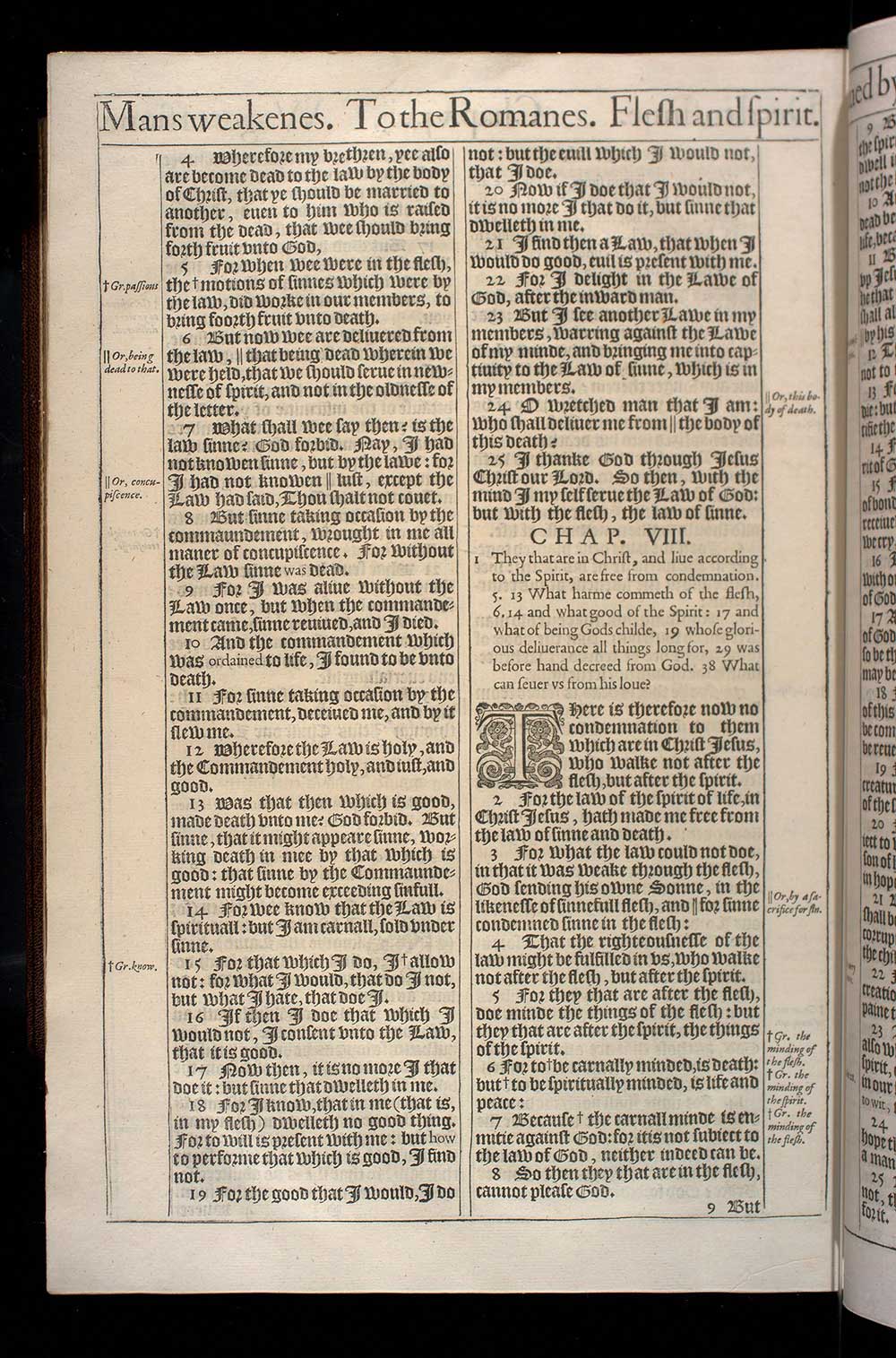 1 No law hath power ouer a man, longer then hee liueth. 4 But wee are dead to the law. 7 Yet is not the law sinne, 12 but holy, iust, good, 16 as I acknowledge, who am grieued because I cannot keepe it.

1Know ye not, brethren (for I speake to them that knowe the Lawe) how that the Lawe hath dominion ouer a man, as long as he liueth?

2For the woman which hath an husbaud, is bound by the law to her husband, so long as he liueth: but if the husband be dead, she is loosed from the law of the husband.

4Wherefore my brethren, yee also are become dead to the law by the body of Christ, that ye should be married to another, euen to him who is raised from the dead, that wee should bring forth fruit vnto God,

5For when wee were in the flesh, the motions of sinnes which were by the law, did worke in our members, to bring foorth fruit vnto death.5

6But now wee are deliuered from the law, that being dead wherein we were held, that we should serue in newnesse of spirit, and not in the oldnesse of the letter.6

8But sinne taking occasion by the commaundement, wrought in me all maner of concupiscence. For without the Law sinne was dead.

9For I was aliue without the Law once, but when the commandement came, sinne reuiued, and I died.

10And the commandement which was ordained to life, I found to be vnto death.

11For sinne taking occasion by the commandement, deceiued me, and by it slew me.

12Wherefore the Law is holy, and the Commandement holy, and iust, and good.

13Was that then which is good, made death vnto me? God forbid. But sinne, that it might appeare sinne, working death in mee by that which is good: that sinne by the Commaundement might become exceeding sinfull.

14For wee know that the Law is spirituall: but I am carnall, sold vnder sinne.

16If then I doe that which I would not, I consent vnto the Law, that it is good.

17Now then, it is no more I that doe it: but sinne that dwelleth in me.

18For I know, that in me (that is, in my flesh) dwelleth no good thing. For to will is present with me: but how to performe that which is good, I find not.

19For the good that I would, I do not: but the euill which I would not, that I doe.

20Now if I doe that I would not, it is no more I that do it, but sinne that dwelleth in me.

21I find then a Law, that when I would do good, euil is present with me.

22For I delight in the Lawe of God, after the inward man.

23But I see another Lawe in my members, warring against the Lawe of my minde, and bringing me into captiuity to the Law of sinne, which is in my members.

24O wretched man that I am: who shall deliuer me from the body of this death?24

25I thanke God through Iesus Christ our Lord. So then, with the mind I my self serue the Law of God: but with the flesh, the law of sinne.