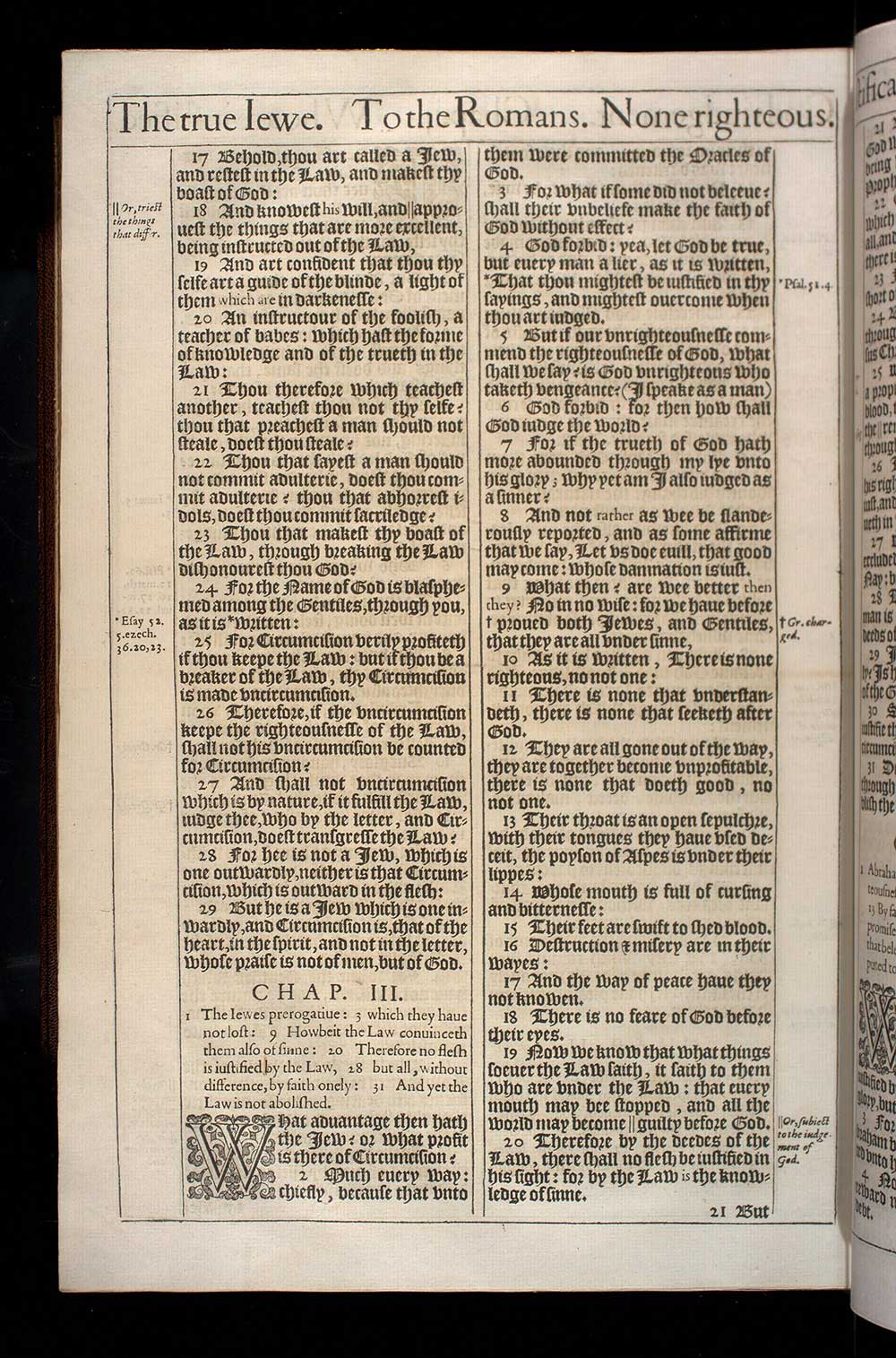 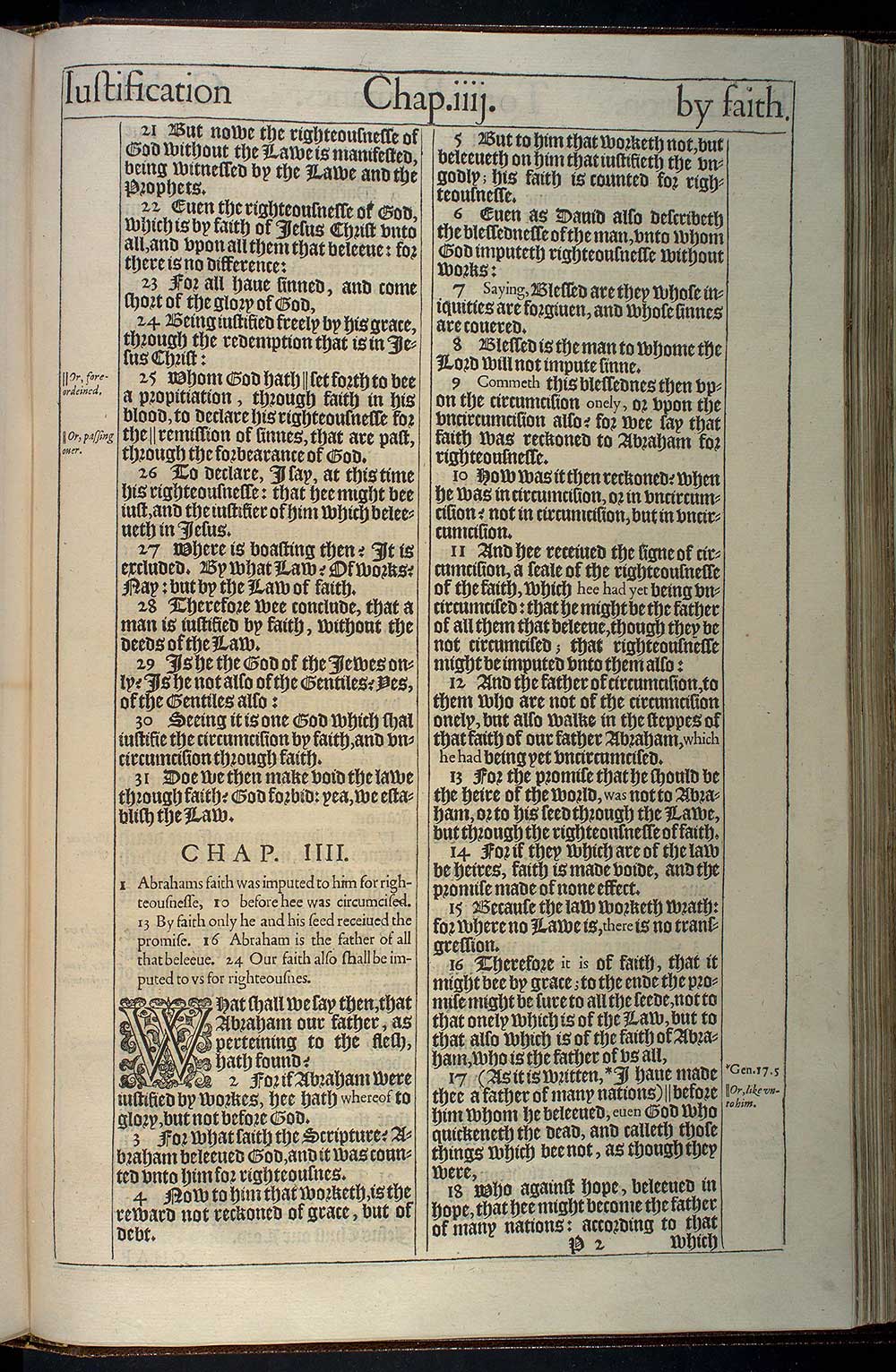 1 The Iewes prerogatiue: 3 which they haue not lost: 9 Howbeit the Law conuinceth them also of sinne: 20 Therefore no flesh is iustified by the Law, 28 but all, without difference, by faith onely: 31 And yet the Law is not abolished.

1What aduantage then hath the Iew? or what profit is there of Circumcision?

2Much euery way: chiefly, because that vnto them were committed the Oracles of God.

3For what if some did not beleeue? shall their vnbeliefe make the faith of God without effect?

4God forbid: yea, let God be true, but euery man a lier, as it is written, That thou mightest be iustified in thy sayings, and mightest ouercome when thou art iudged.4

6God forbid: for then how shall God iudge the world?

7For if the trueth of God hath more abounded through my lye vnto his glory; why yet am I also iudged as a sinner?

8And not rather as wee be slanderously reported, and as some affirme that we say, Let vs doe euill, that good may come: whose damnation is iust.

9What then? are wee better then they? No in no wise: for we haue before proued both Iewes, and Gentiles, that they are all vnder sinne,9

10As it is written, There is none righteous, no not one:

12They are all gone out of the way, they are together become vnprofitable, there is none that doeth good, no not one.

13Their throat is an open sepulchre, with their tongues they haue vsed deceit, the poyson of Aspes is vnder their lippes:

14Whose mouth is full of cursing and bitternesse:

15Their feet are swift to shed blood.

16Destruction & misery are in their wayes:

17And the way of peace haue they not knowen.

18There is no feare of God before their eyes.

19Now we know that what things soeuer the Law saith, it saith to them who are vnder the Law: that euery mouth may bee stopped, and all the world may become guilty before God.19

20Therefore by the deedes of the Law, there shall no flesh be iustified in his sight: for by the Law is the knowledge of sinne.

21But nowe the righteousnesse of God without the Lawe is manifested, being witnessed by the Lawe and the Prophets.

22Euen the righteousnesse of God, which is by faith of Iesus Christ vnto all, and vpon all them that beleeue: for there is no difference:

23For all haue sinned, and come short of the glory of God,

24Being iustified freely by his grace, through the redemption that is in Iesus Christ:

25Whom God hath set forth to bee a propitiation, through faith in his blood, to declare his righteousnesse for the remission of sinnes, that are past, through the forbearance of God.25

26To declare, I say, at this time his righteousnesse: that hee might bee iust, and the iustifier of him which beleeueth in Iesus.

27Where is boasting then? It is excluded. By what Law? Of works? Nay: but by the Law of faith.

28Therefore wee conclude, that a man is iustified by faith, without the deeds of the Law.

30Seeing it is one God which shal iustifie the circumcision by faith, and vncircumcision through faith.

31Doe we then make void the lawe through faith? God forbid: yea, we establish the Law.