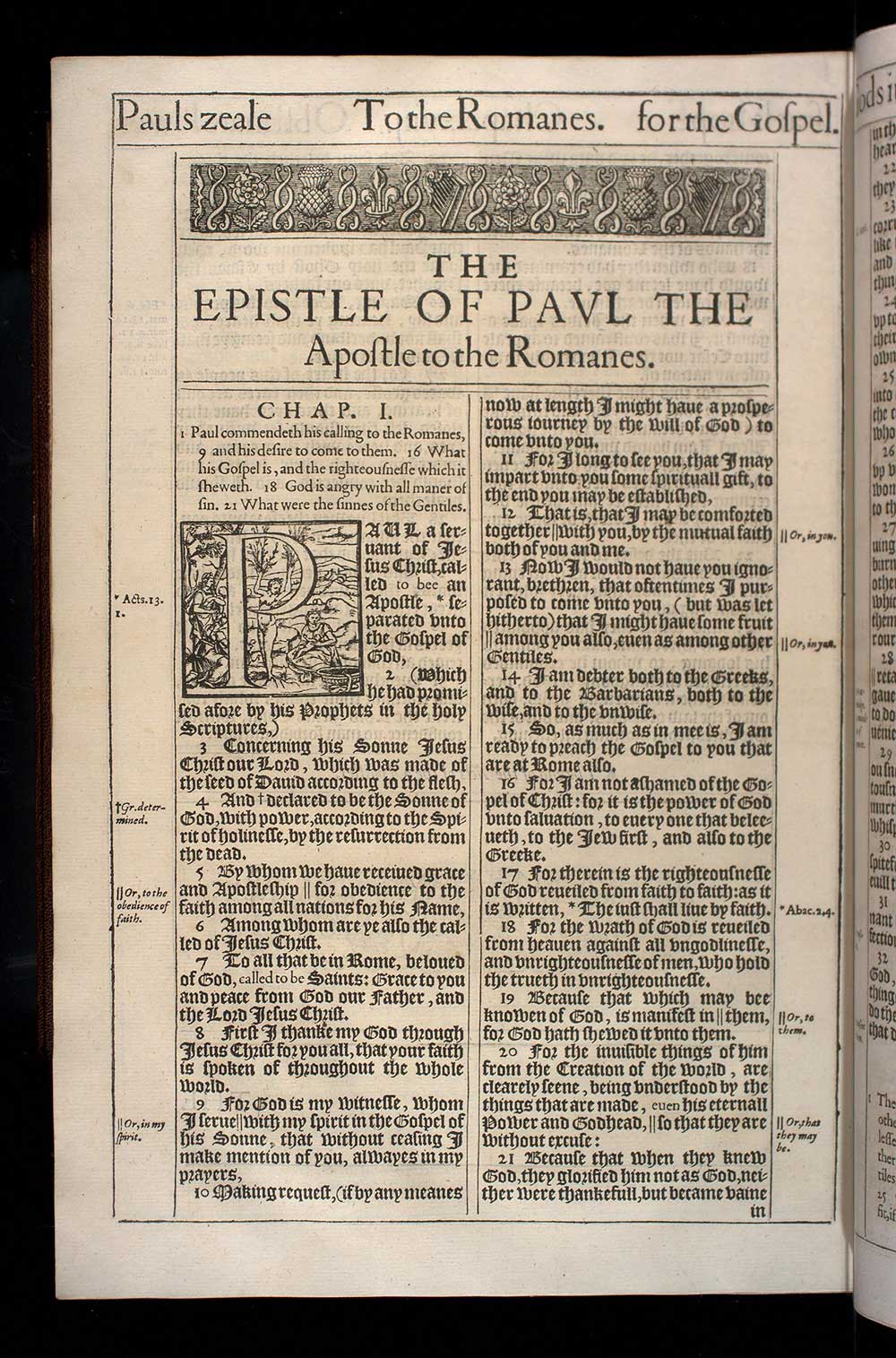 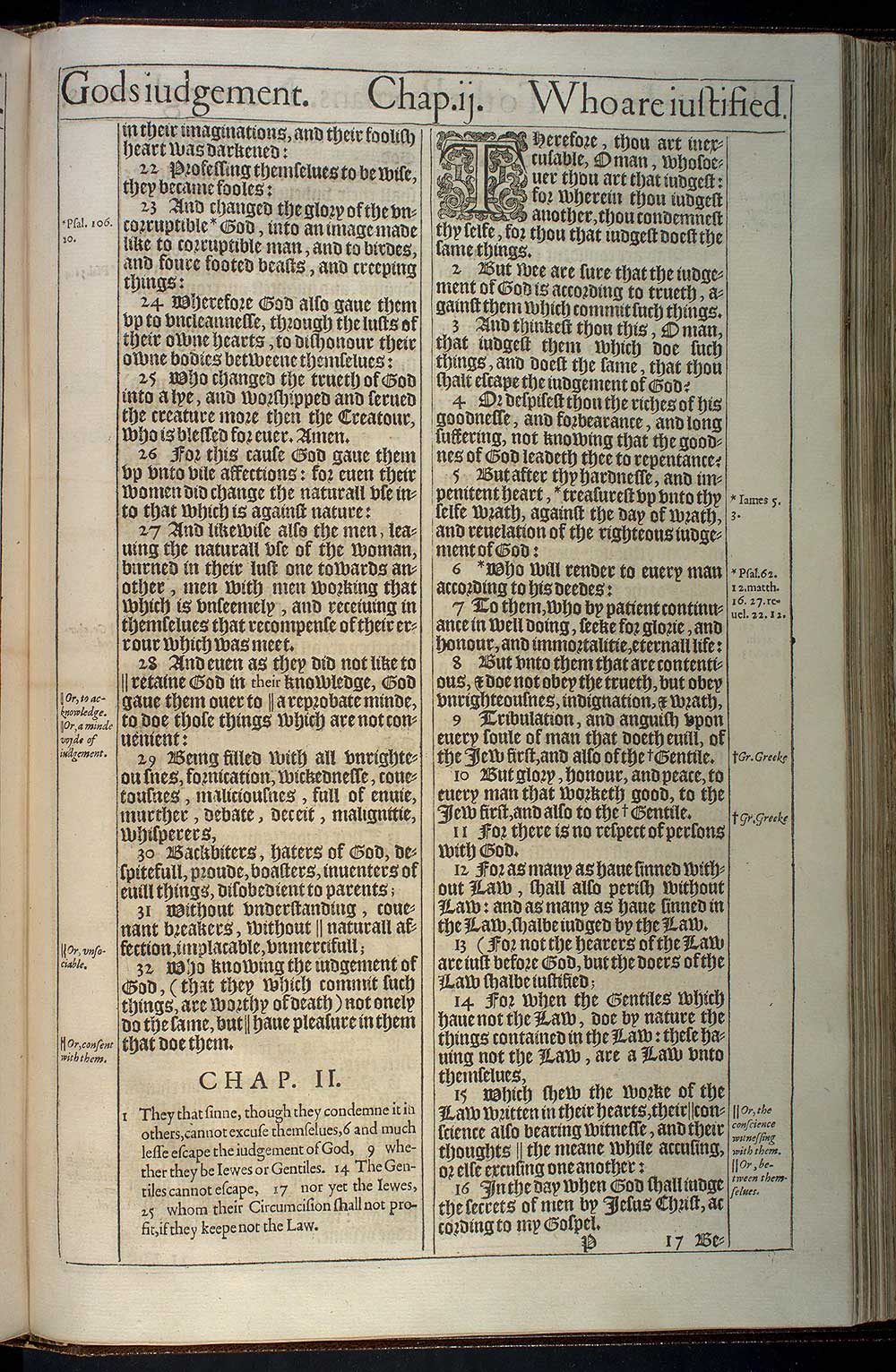 1 Paul commendeth his calling to the Romanes, 9 and his desire to come to them. 16 What his Gospel is, and the righteousnesse which it sheweth. 18 God is angry with all maner of sin. 21 What were the sinnes of the Gentiles.

1Paul a seruant of Iesus Christ, called to bee an Apostle, separated vnto the Gospel of God,1

2(Which he had promised afore by his Prophets in the holy Scriptures,)

3Concerning his Sonne Iesus Christ our Lord, which was made of the seed of Dauid according to the flesh,

4And declared to be the Sonne of God, with power, according to the Spirit of holinesse, by the resurrection from the dead.4

5By whom we haue receiued grace and Apostleship for obedience to the faith among all nations for his Name,5

6Among whom are ye also the called of Iesus Christ.

7To all that be in Rome, beloued of God, called to be Saints: Grace to you and peace from God our Father, and the Lord Iesus Christ.

8First I thanke my God through Iesus Christ for you all, that your faith is spoken of throughout the whole world.

9For God is my witnesse, whom I serue with my spirit in the Gospel of his Sonne, that without ceasing I make mention of you, alwayes in my prayers,9

Pauls zeale for the Gospel.

10Making request, (if by any meanes now at length I might haue a prosperous iourney by the will of God) to come vnto you.

11For I long to see you, that I may impart vnto you some spirituall gift, to the end you may be established,

12That is, that I may be comforted together with you, by the mutual faith both of you and me.12

13Now I would not haue you ignorant, brethren, that oftentimes I purposed to come vnto you, (but was let hitherto) that I might haue some fruit among you also, euen as among other Gentiles.13

15So, as much as in mee is, I am ready to preach the Gospel to you that are at Rome also.

16For I am not ashamed of the Gopel of Christ: for it is the power of God vnto saluation, to euery one that beleeueth, to the Iew first, and also to the Greeke.

17For therein is the righteousnesse of God reueiled from faith to faith: as it is written, The iust shall liue by faith.17

19Because that which may bee knowen of God, is manifest in them, for God hath shewed it vnto them.19

20For the inuisible things of him from the Creation of the world, are clearely seene, being vnderstood by the things that are made, euen his eternall Power and Godhead, so that they are without excuse:20

21Because that when they knew God, they glorified him not as God, neither were thankefull, but became vaine in their imaginations, and their foolish heart was darkened:

22Professing themselues to be wise, they became fooles:

23And changed the glory of the vncorruptible God, into an image made like to corruptible man, and to birdes, and foure footed beasts, and creeping things:23

24Wherefore God also gaue them vp to vncleannesse, through the lusts of their owne hearts, to dishonour their owne bodies betweene themselues:

25Who changed the trueth of God into a lye, and worshipped and serued the creature more then the Creatour, who is blessed for euer. Amen.

26For this cause God gaue them vp vnto vile affections: for euen their women did change the naturall vse into that which is against nature:

27And likewise also the men, leauing the naturall vse of the woman, burned in their lust one towards another, men with men working that which is vnseemely, and receiuing in themselues that recompense of their errour which was meet.

28And euen as they did not like to retaine God in their knowledge, God gaue them ouer to a reprobate minde, to doe those things which are not conuenient:28

32Who knowing the iudgement of God, (that they which commit such things, are worthy of death) not onely do the same, but haue pleasure in them that doe them.32