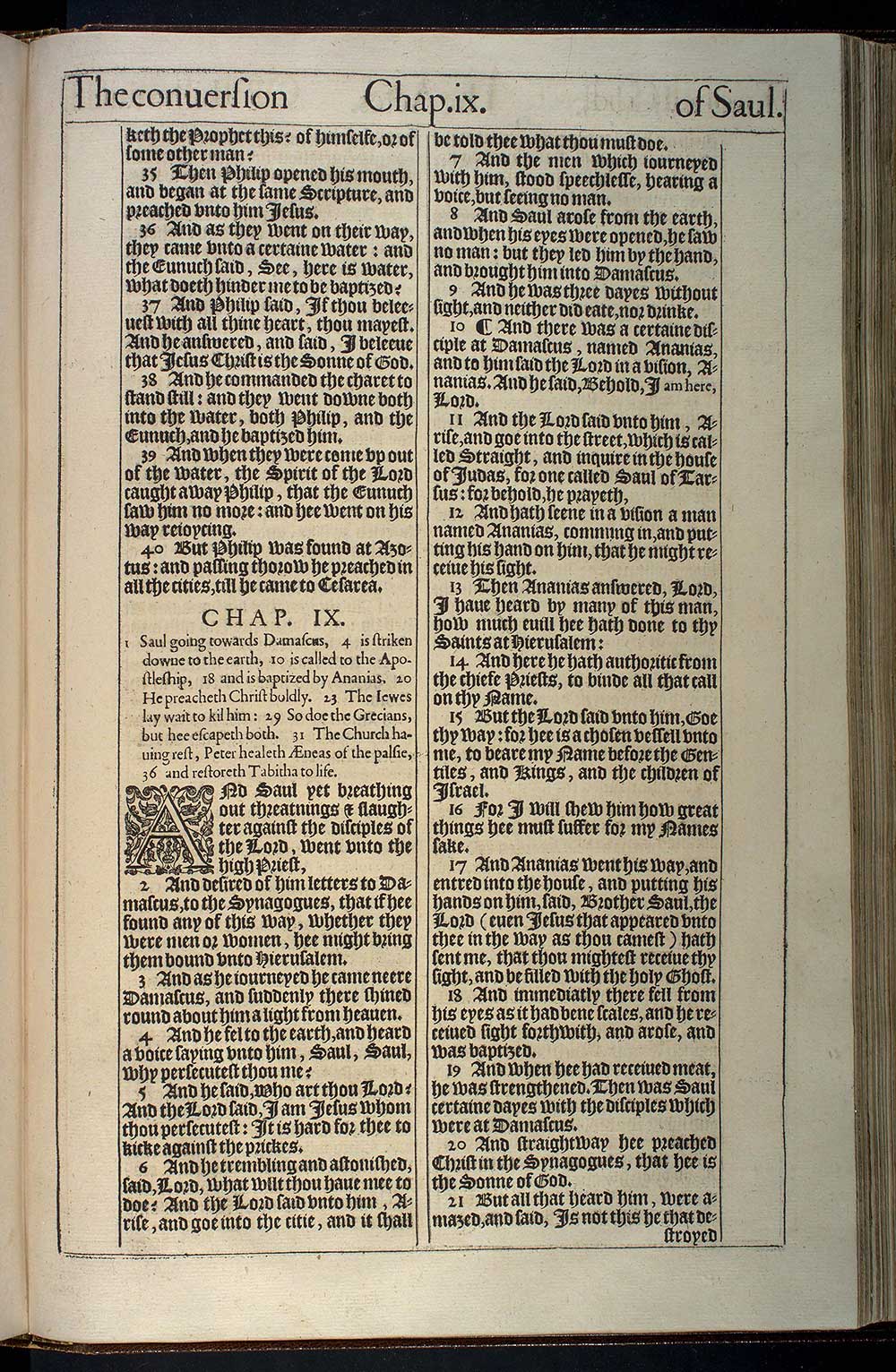 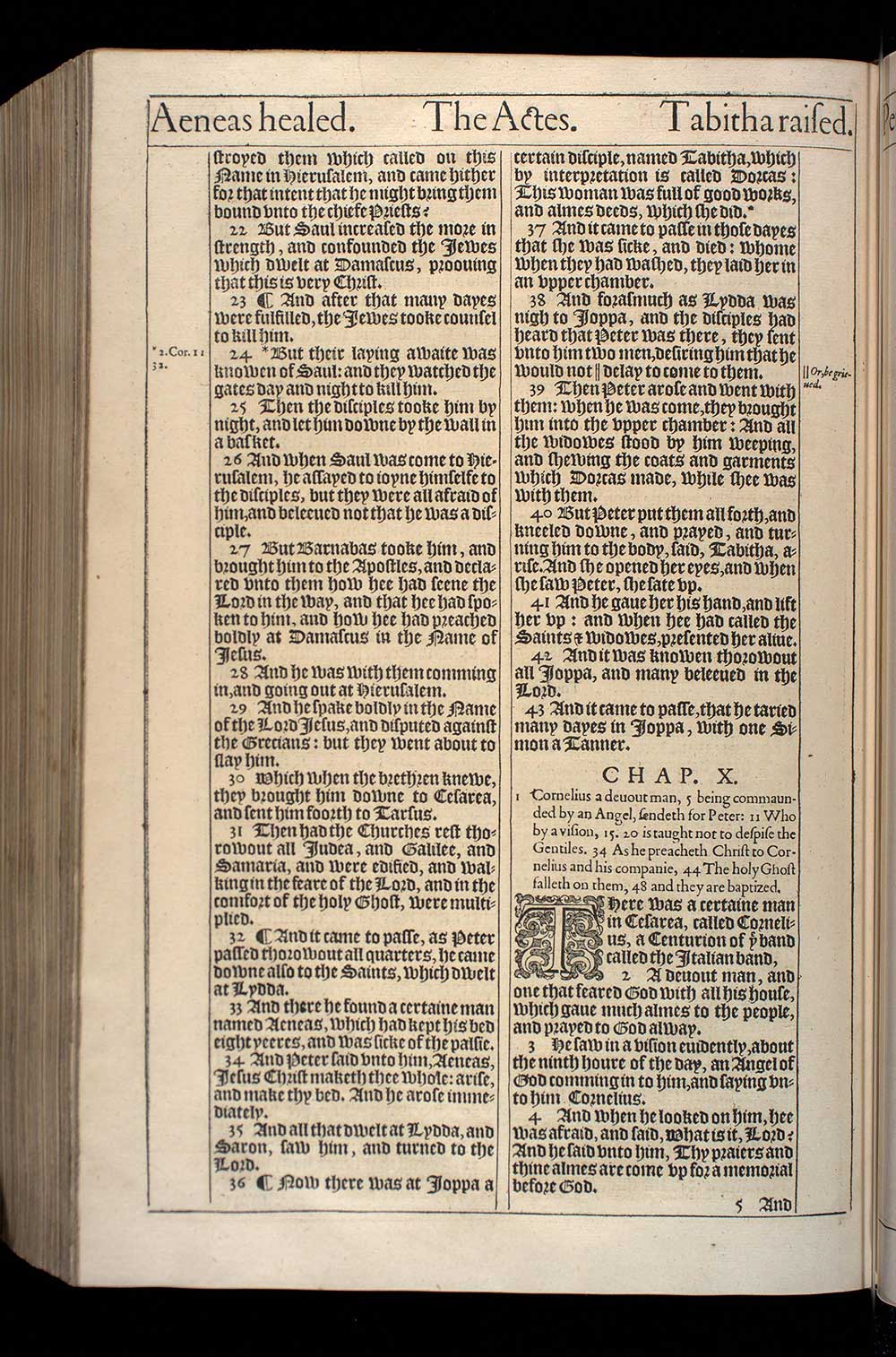 1 Saul going towards Damascus, 4 is striken downe to the earth, 10 is called to the Apostleship, 18 and is baptized by Ananias, 20 He preacheth Christ boldly. 23 The Iewes lay wait to kil him: 29 So doe the Grecians, but hee escapeth both. 31 The Church hauing rest, Peter healeth Æneas of the palsie, 36 and restoreth Tabitha to life.

1And Saul yet breathing out threatnings & slaughter against the disciples of the Lord, went vnto the high Priest,

2And desired of him letters to Damascus, to the Synagogues, that if hee found any of this way, whether they were men or women, hee might bring them bound vnto Hierusalem.

3And as he iourneyed he came neere Damascus, and suddenly there shined round about him a light from heauen.

4And he fel to the earth, and heard a voice saying vnto him, Saul, Saul, why persecutest thou me?

5And he said, Who art thou Lord? And the Lord said, I am Iesus whom thou persecutest: It is hard for thee to kicke against the prickes.

6And he trembling and astonished, said, Lord, what wilt thou haue mee to doe? And the Lord said vnto him, Arise, and goe into the citie, and it shall be told thee what thou must doe.

7And the men which iourneyed with him, stood speechlesse, hearing a voice, but seeing no man.

8And Saul arose from the earth, and when his eyes were opened, he saw no man: but they led him by the hand, and brought him into Damascus.

9And he was three dayes without sight, and neither did eate, nor drinke.

10¶ And there was a certaine disciple at Damascus, named Ananias, and to him said the Lord in a vision, Ananias. And he said, Behold, I am here, Lord.

11And the Lord said vnto him, Arise, and goe into the street, which is called Straight, and inquire in the house of Iudas, for one called Saul of Tarsus: for behold, he prayeth,

12And hath seene in a vision a man named Ananias, comming in, and putting his hand on him, that he might receiue his sight.

13Then Ananias answered, Lord, I haue heard by many of this man, how much euill hee hath done to thy Saints at Hierusalem:

14And here he hath authoritic from the chiefe Priests, to binde all that call on thy Name.

15But the Lord said vnto him, Goe thy way: for hee is a chosen vessell vnto me, to beare my Name before the Gentiles, and Kings, and the children of Israel.

16For I will shew him how great things hee must suffer for my Names sake.

17And Ananias went his way, and entred into the house, and putting his hands on him, said, Brother Saul, the Lord (euen Iesus that appeared vnto thee in the way as thou camest) hath sent me, that thou mightest receiue thy sight, and be filled with the holy Ghost.

18And immediatly there fell from his eyes as it had bene scales, and he receiued sight forthwith, and arose, and was baptized.

19And when hee had receiued meat, he was strengthened. Then was Saul certaine dayes with the disciples which were at Damascus.

20And straightway hee preached Christ in the Synagogues, that hee is the Sonne of God.

21But all that heard him, were amazed, and said, Is not this he that destroyed them which called on this Name in Hierusalem, and came hither for that intent that he might bring them bound vnto the chiefe Priests?

22But Saul increased the more in strength, and confounded the Iewes which dwelt at Damascus, proouing that this is very Christ.

23¶ And after that many dayes were fulfilled, the Iewes tooke counsel to kill him.

24But their laying awaite was knowen of Saul: and they watched the gates day and night to kill him.24

25Then the disciples tooke him by night, and let him downe by the wall in a basket.

26And when Saul was come to Hierusalem, he assayed to ioyne himselfe to the disciples, but they were all afraid of him, and beleeued not that he was a disciple.

27But Barnabas tooke him, and brought him to the Apostles, and declared vnto them how hee had seene the Lord in the way, and that hee had spoken to him, and how hee had preached boldly at Damascus in the Name of Iesus.

28And he was with them comming in, and going out at Hierusalem.

29And he spake boldly in the Name of the Lord Iesus, and disputed against the Grecians: but they went about to slay him.

30Which when the brethren knewe, they brought him downe to Cesarea, and sent him foorth to Tarsus.

31Then had the Churches rest thorowout all Iudea, and Galilee, and Samaria, and were edified, and walking in the feare of the Lord, and in the comfort of the holy Ghost, were multiplied.

32¶ And it came to passe, as Peter passed thorowout all quarters, he came downe also to the Saints, which dwelt at Lydda.

33And there he found a certaine man named Aeneas, which had kept his bed eight yeeres, and was sicke of the palsie.

34And Peter said vnto him, Aeneas, Iesus Christ maketh thee whole: arise, and make thy bed. And he arose immediately.

35And all that dwelt at Lydda, and Saron, saw him, and turned to the Lord.

36¶ Now there was at Ioppa a certain disciple, named Tabitha, which by interpretation is called Dorcas: This woman was full of good works, and almes deeds, which she did.

37And it came to passe in those dayes that she was sicke, and died: whome when they had washed, they laid her in an vpper chamber.

38And forasmuch as Lydda was nigh to Ioppa, and the disciples had heard that Peter was there, they sent vnto him two men, desiring him that he would not delay to come to them.38

39Then Peter arose and went with them: when he was come, they brought him into the vpper chamber: And all the widowes stood by him weeping, and shewing the coats and garments which Dorcas made, while shee was with them.

40But Peter put them all forth, and kneeled downe, and prayed, and turning him to the body, said, Tabitha, arise. And she opened her eyes, and when she saw Peter, she sate vp.

41And he gaue her his hand, and lift her vp: and when hee had called the Saints & widowes, presented her aliue.

42And it was knowen thorowout all Ioppa, and many beleeued in the Lord.

43And it came to passe, that he taried many dayes in Ioppa, with one Simon a Tanner.