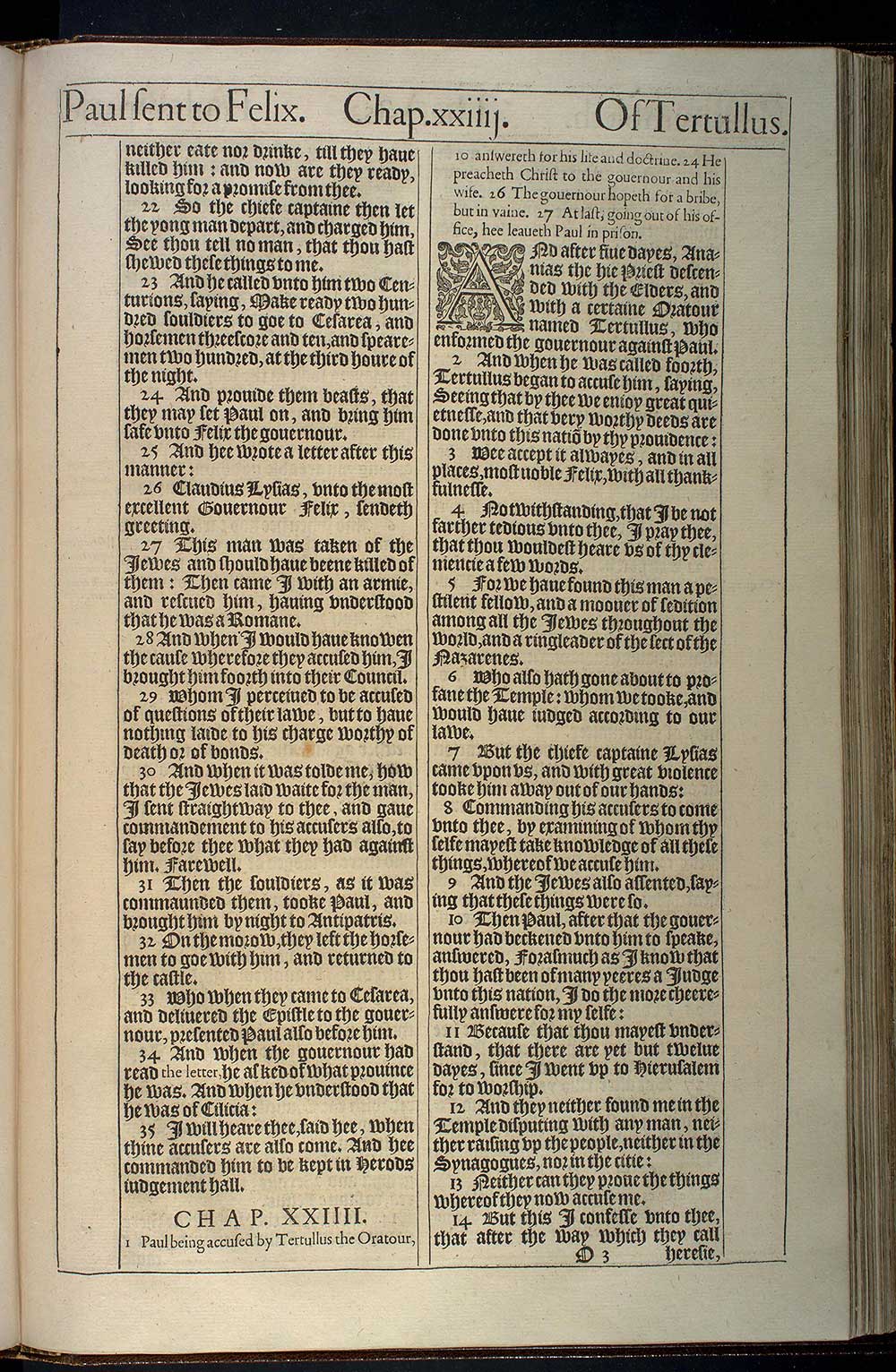 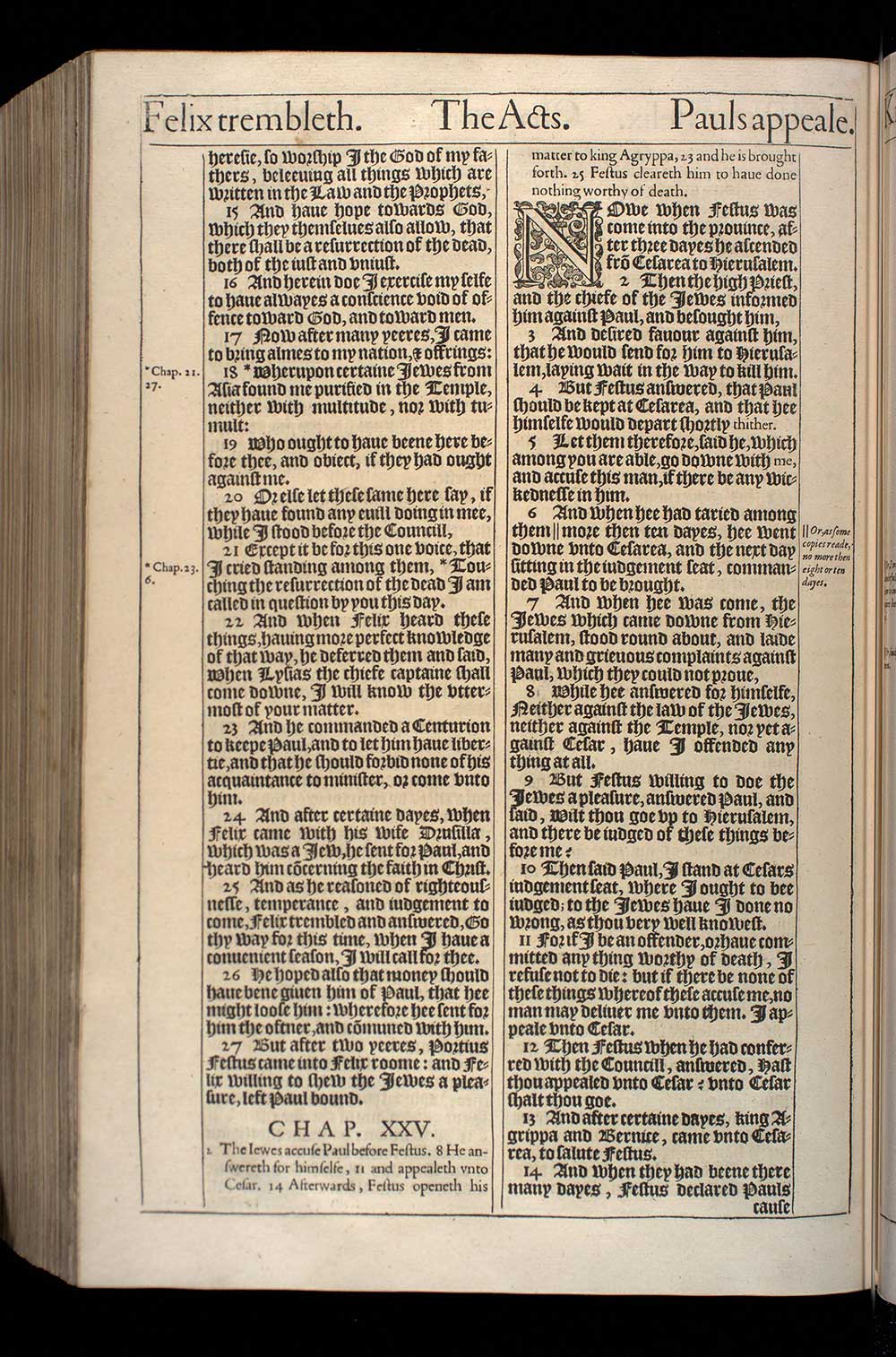 1 Paul being accused by Tertullus the Oratour, 10 answereth for his life and doctrine. 24 He preacheth Christ to the gouernour and his wife. 26 The gouernour hopeth for a bribe, but in vaine. 27 At last, going out of his office, hee leaueth Paul in prison.

1And after fiue dayes, Ananias the hie Priest descended with the Elders, and with a certaine Oratour named Tertullus, who enformed the gouernour against Paul.

2And when he was called foorth, Tertullus began to accuse him, saying, Seeing that by thee we enioy great quietnesse, and that very worthy deeds are done vnto this natiō by thy prouidence:

3Wee accept it alwayes, and in all places, most noble Felix, with all thankfulnesse.

4Notwithstanding, that I be not farther tedious vnto thee, I pray thee, that thou wouldest heare vs of thy clemencie a few words.

5For we haue found this man a pestilent fellow, and a moouer of sedition among all the Iewes throughout the world, and a ringleader of the sect of the Nazarenes.

6Who also hath gone about to profane the Temple: whom we tooke, and would haue iudged according to our lawe.

7But the chiefe captaine Lysias came vpon vs, and with great violence tooke him away out of our hands:

8Commanding his accusers to come vnto thee, by examining of whom thy selfe mayest take knowledge of all these things, whereof we accuse him.

9And the Iewes also assented, saying that these things were so.

10Then Paul, after that the gouernour had beckened vnto him to speake, answered, Forasmuch as I know that thou hast been of many yeeres a Iudge vnto this nation, I do the more cheerefully answere for my selfe:

11Because that thou mayest vnderstand, that there are yet but twelue dayes, since I went vp to Hierusalem for to worship.

12And they neither found me in the Temple disputing with any man, neither raising vp the people, neither in the Synagogues, nor in the citie:

13Neither can they proue the things whereof they now accuse me.

14But this I confesse vnto thee, that after the way which they call heresie, so worship I the God of my fathers, beleeuing all things which are written in the Law and the Prophets,

15And haue hope towards God, which they themselues also allow, that there shall be a resurrection of the dead, both of the iust and vniust.

16And herein doe I exercise my selfe to haue alwayes a conscience void of offence toward God, and toward men.

17Now after many yeeres, I came to bring almes to my nation, & offrings:

18Wherupon certaine Iewes from Asia found me purified in the Temple, neither with multitude, nor with tumult:18

19Who ought to haue beene here before thee, and obiect, if they had ought against me.

20Or else let these same here say, if they haue found any euill doing in mee, while I stood before the Councill,

21Except it be for this one voice, that I cried standing among them, Touching the resurrection of the dead I am called in question by you this day.21

22And when Felix heard these things, hauing more perfect knowledge of that way, he deferred them and said, When Lysias the chiefe captaine shall come downe, I will know the vttermost of your matter.

23And he commanded a Centurion to keepe Paul, and to let him haue libertie, and that he should forbid none of his acquaintance to minister, or come vnto him.

24And after certaine dayes, when Felix came with his wife Orusilla, which was a Iew, he sent for Paul, and heard him cōcerning the faith in Christ.

25And as he reasoned of righteousnesse, temperance, and iudgement to come, Felix trembled and answered, Go thy way for this time, when I haue a conuenient season, I will call for thee.

26He hoped also that money should haue bene giuen him of Paul, that hee might loose him: wherefore hee sent for him the oftner, and cōmuned with him.

27But after two yeeres, Portius Festus came into Felix roome: and Felix willing to shew the Iewes a pleasure, left Paul bound.