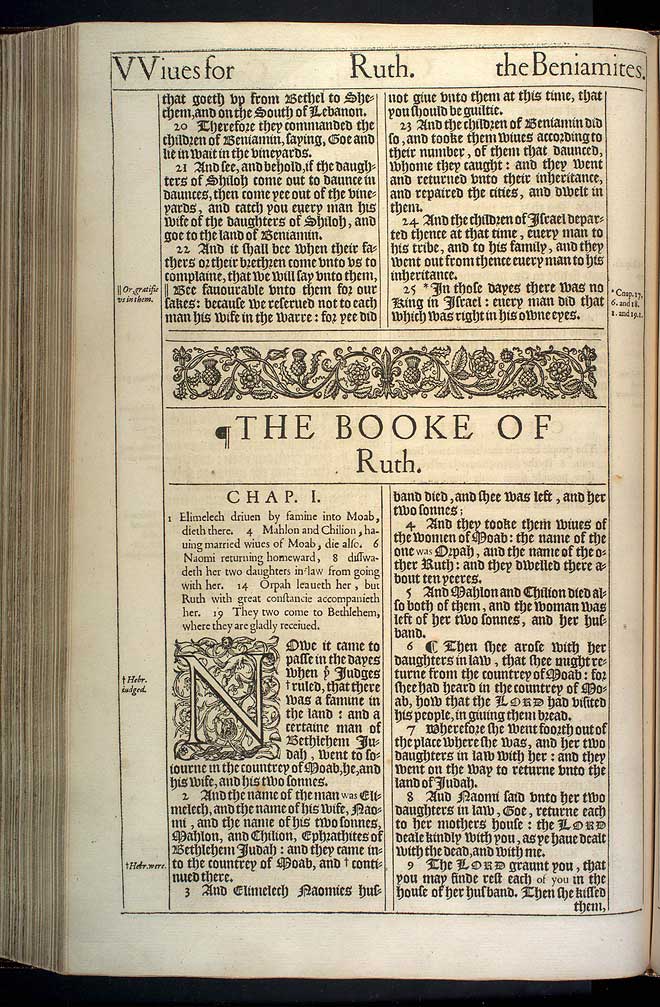 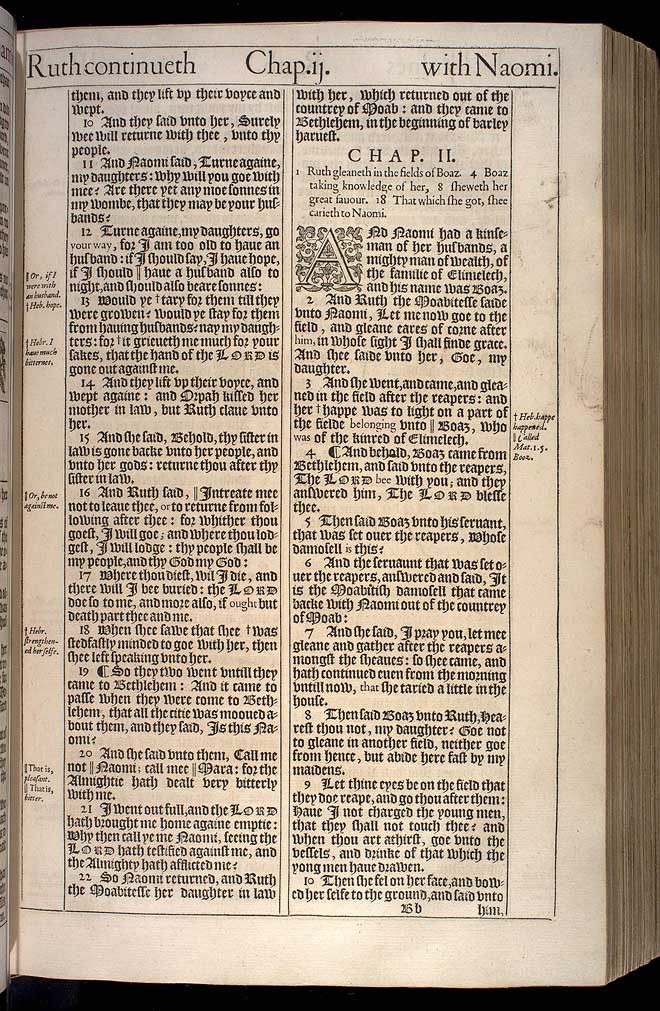 View this Ruth chapter 1 scan at a larger size

1 Elimelech driuen by famine into Moab, dieth there. 4 Mahlon and Chilion, hauing married wiues of Moab, die also. 6 Naomi returning homeward, 8 disswadeth her two daughters in law from going with her. 14 Orpah leaueth her, but Ruth with great constancie accompanieth her. 19 They two come to Bethlehem, where they are gladly receiued.

1 Nowe it came to passe in the dayes when þe Iudges ruled, that there was a famine in the land: and a certaine man of Bethlehem Iudah, went to soiourne in the countrey of Moab, he, and his wife, and his two sonnes.1

3 And Elimelech Naomies husband died, and shee was left, and her two sonnes;

5 And Mahlon and Chilion died also both of them, and the woman was left of her two sonnes, and her husband.

7 Wherefore she went foorth out of the place where she was, and her two daughters in law with her: and they went on the way to returne vnto the land of Iudah.

8 Aud Naomi said vnto her two daughters in law, Goe, returne each to her mothers house: the Lord deale kindly with you, as ye haue dealt with the dead, and with me.

9 The Lord graunt you, that you may finde rest each of you in the house of her husband. Then she kissed them, and they lift vp their voyce and wept.

10 And they said vnto her, Surely wee will returne with thee, vnto thy people.

11 And Naomi said, Turne againe, my daughters: why will you goe with mee? Are there yet any moe sonnes in my wombe, that they may be your husbands?

12 Turne againe, my daughters, go your way, for I am too old to haue an husband: if I should say, I haue hope, if I should haue a husband also to night, and should also beare sonnes:12

13 Would ye tary for them till they were growen? would ye stay for them from hauing husbands? nay my daughters: for it grieueth me much for your sakes, that the hand of the Lord is gone out against me.13

14 And they lift vp their voyce, and wept againe: and Orpah kissed her mother in law, but Ruth claue vnto her.

16 And Ruth said, Intreate mee not to leaue thee, or to returne from following after thee: for whither thou goest, I will goe; and where thou lodgest, I will lodge: thy people shall be my people, and thy God my God:16

17 Where thou diest, wil I die, and there will I bee buried: the Lord doe so to me, and more also, if ought but death part thee and me.

18 When shee sawe that shee was stedfastly minded to goe with her, then shee left speaking vnto her.18

19 ¶ So they two went vntill they came to Bethlehem: And it came to passe when they were come to Bethlehem, that all the citie was mooued about them, and they said, Is this Naomi?

20 And she said vnto them, Call me not Naomi; call mee Mara: for the Almightie hath dealt very bitterly with me.20

21 I went out full, and the Lord hath bought me home againe emptie: Why then call ye me Naomi, seeing the Lord hath testified against me, and the Almighty hath afflicted me?

22 So Naomi returned, and Ruth the Moabitesse her daughter in law with her, which returned out of the countrey of Moab: and they came to Bethlehem, in the beginning of barley haruest.