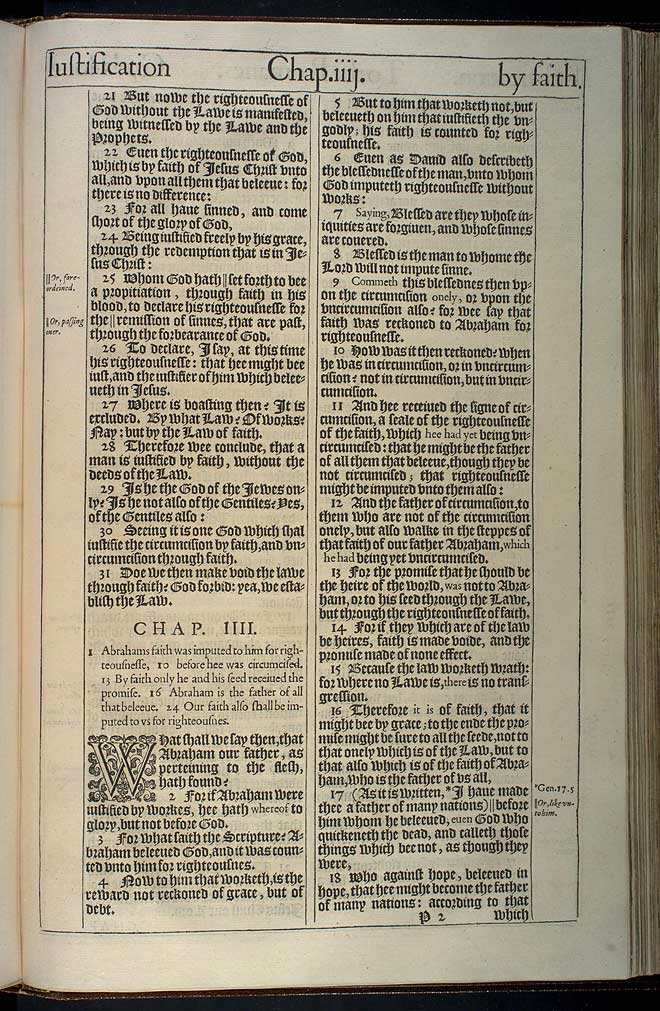 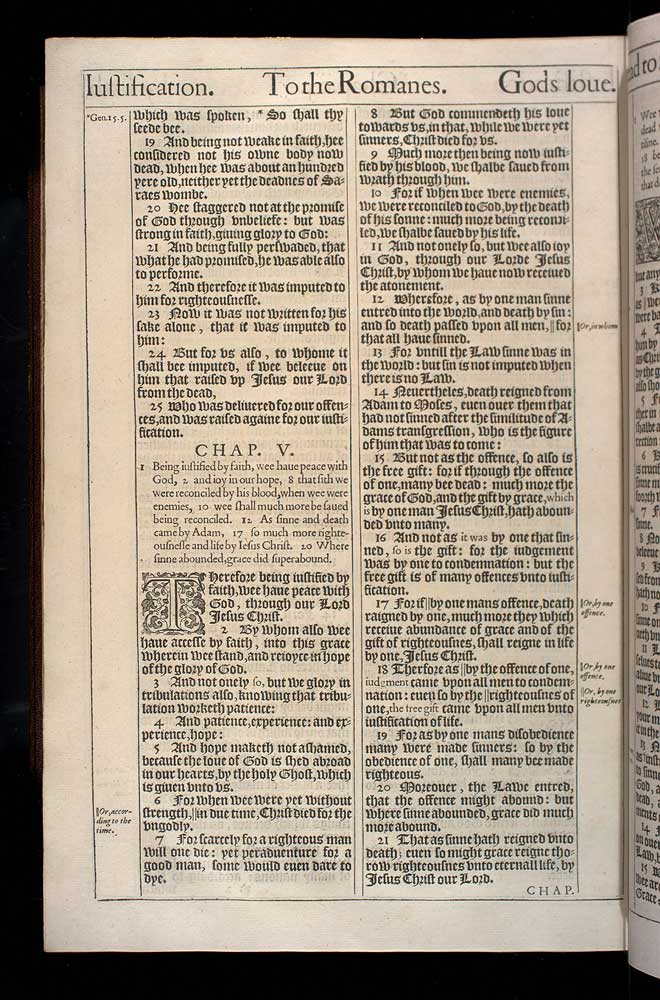 1 Abrahams faith was imputed to him for righteousnesse, 10 before hee was circumcised. 13 By faith only he and his seed receiued the promise. 16 Abraham is the father of all that beleeue. 24 Our faith also shall be imputed to vs for righteousnes.

1 What shall we say then, that Abraham our father, as perteining to the flesh, hath found?

2 For if Abraham were iustified by workes, hee hath whereof to glory, but not before God.

3 For what saith the Scripture? Abraham beleeued God, and it was counted vnto him for righteousnes.

4 Now to him that worketh, is the reward not reckoned of grace, but of debt.

5 But to him that worketh not, but beleeueth on him that iustifieth the vngodly; his faith is counted for righteousnesse.

6 Euen as Dauid also describeth the blessednesse of the man, vnto whom God imputeth righteousnesse without works:

7 Saying, Blessed are they whose iniquities are forgiuen, and whose sinnes are couered.

8 Blessed is the man to whome the Lord will not impute sinne.

9 Commeth this blessednes then vpon the circumcision onely, or vpon the vncircumcision also? for wee say that faith was reckoned to Abraham for righteousnesse.

11 And hee receiued the signe of circumcision, a seale of the righteousnesse of the faith, which hee had yet being vncircumcised: that he might be the father of all them that beleeue, though they be not circumcised; that righteousnesse might be imputed vnto them also:

12 And the father of circumcision, to them who are not of the circumcision onely, but also walke in the steppes of that faith of our father Abraham, which he had being yet vncircumcised.

13 For the promise that he should be the heire of the world, was not to Abraham, or to his seed through the Lawe, but through the righteousnesse of faith.

14 For if they which are of the law be heires, faith is made voide, and the promise made of none effect.

15 Because the law worketh wrath: for where no Lawe is, there is no transgression.

16 Therefore it is of faith, that it might bee by grace; to the ende the promise might be sure to all the seede, not to that onely which is of the Law, but to that also which is of the faith of Abraham, who is the father of vs all,

17 (As it is written, I haue made thee a father of many nations) before him whom he beleeued, euen God who quickeneth the dead, and calleth those things which bee not, as though they were,17

18 Who against hope, beleeued in hope, that hee might become the father of many nations: according to that which was spoken, So shall thy seede bee.18

19 And being not weake in faith, hee considered not his owne body now dead, when hee was about an hundred yere old, neither yet the deadnes of Saraes wombe.

20 Hee staggered not at the promise of God through vnbeliefe: but was strong in faith, giuing glory to God:

21 And being fully perswaded, that what he had promised, he was able also to performe.

22 And therefore it was imputed to him for righteousnesse.

23 Now it was not written for his sake alone, that it was imputed to him:

24 But for vs also, to whome it shall bee imputed, if wee beleeue on him that raised vp Iesus our Lord from the dead,

25 Who was deliuered for our offences, and was raised againe for our iustification.