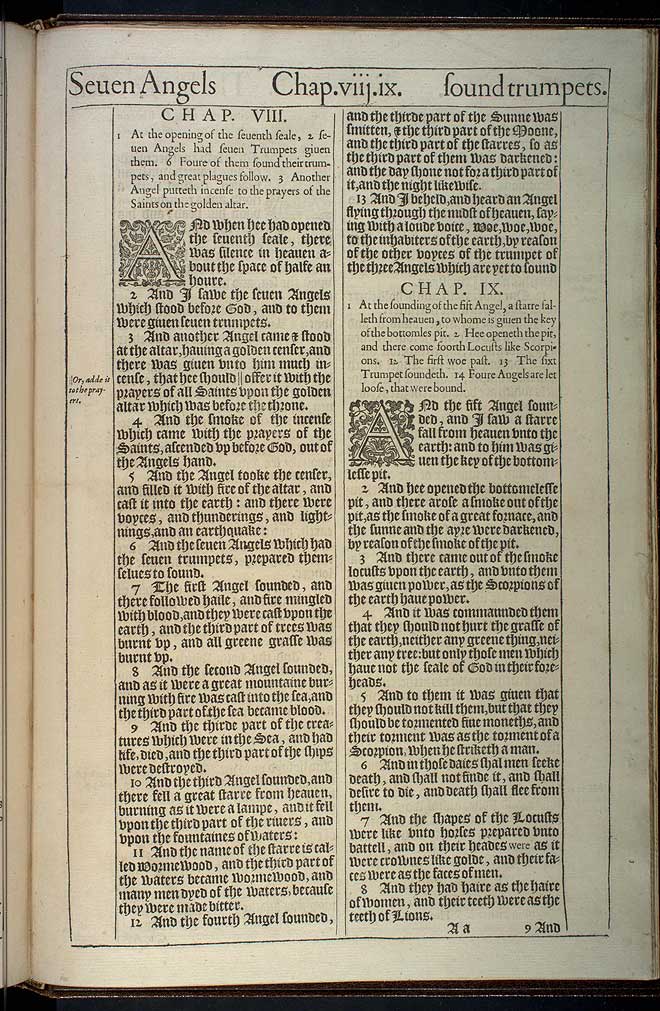 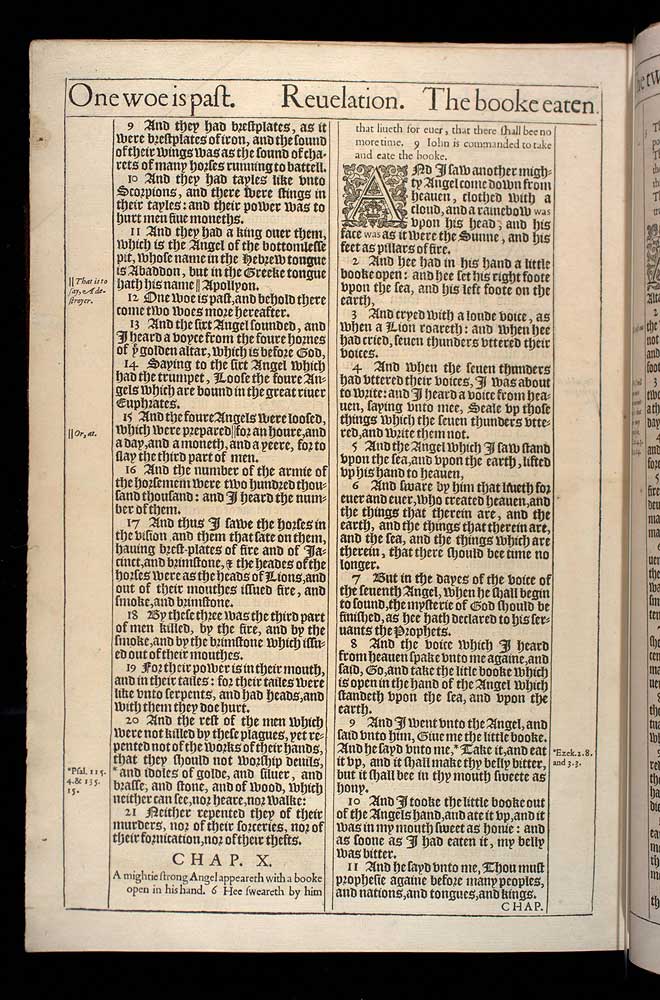 View this Reuelation chapter 9 scan at a larger size

1 At the sounding of the fift Angel, a starre falleth from heauen, to whom is giuen the key of the bottomles pit. 2 He openeth the pit, and there come forth Locusts like Scorpions. 12 The first woe past. 13 The sixt Trumpet soundeth. 14 Foure Angels are let loose, that were bound.

1 And the fift Angel sounded, and I saw a starre fall from heauen vnto the earth: and to him was giuen the key of the bottomlesse pitte.

2 And hee opened the bottomelesse pit, and there arose a smoke out of the pit, as the smoke of a great fornace, and the sunne and the ayre were darkened, by reason of the smoke of the pit.

3 And there came out of the smoke locusts vpon the earth, and vnto them was giuen power, as the Scorpions of the earth haue power.

4 And it was commaunded them that they should not hurt the grasse of the earth, neither any greene thing, neither any tree: but only those men which haue not the seale of God in their foreheads.

6 And in those daies shal men seeke death, and shall not finde it, and shall desire to die, and death shall flee from them.

7 And the shapes of the Locusts were like vnto horses prepared vnto battell, and on their heades were as it were crownes like golde, and their faces were as the faces of men.

8 And they had haire as the haire of women, and their teeth were as the teeth of Lions.

10 And they had tayles like vnto Scorpions, and there were stings in their tayles: and their power was to hurt men fiue moneths.

11 And they had a king ouer them, which is the Angel of the bottomlesse pit, whose name in the Hebrew tongue is Abaddon, but in the Greeke tongue hath his name Apollyon.11

12 One woe is past, and behold there come two woes more hereafter.

13 And the sixt Angel sounded, and I heard a voyce from the foure hornes of þe golden altar, which is before God,

14 Saying to the sixt Angel which had the trumpet, Loose the foure Angels which are bound in the great riuer Euphrates.

15 And the foure Angels were loosed, which were prepared for an houre, and a day, and a moneth, and a yeere, for to slay the third part of men.15

17 And thus I sawe the horses in the vision, and them that sate on them, hauing brest-plates of fire and of Iacinct, and brimstone, & the heades of the horses were as the heads of Lions, and out of their mouthes issued fire, and smoke, and brimstone.

18 By these three was the third part of men killed, by the fire, and by the smoke, and by the brimstone which issued out of their mouthes.

19 For their power is in their mouth, and in their tailes: for their tailes were like vnto serpents, and had heads, and with them they doe hurt.

20 And the rest of the men which were not killed by these plagues, yet repented not of the works of their hands, that they should not worship deuils, and idoles of golde, and siluer, and brasse, and stone, and of wood, which neither can see, nor heare, nor walke:20