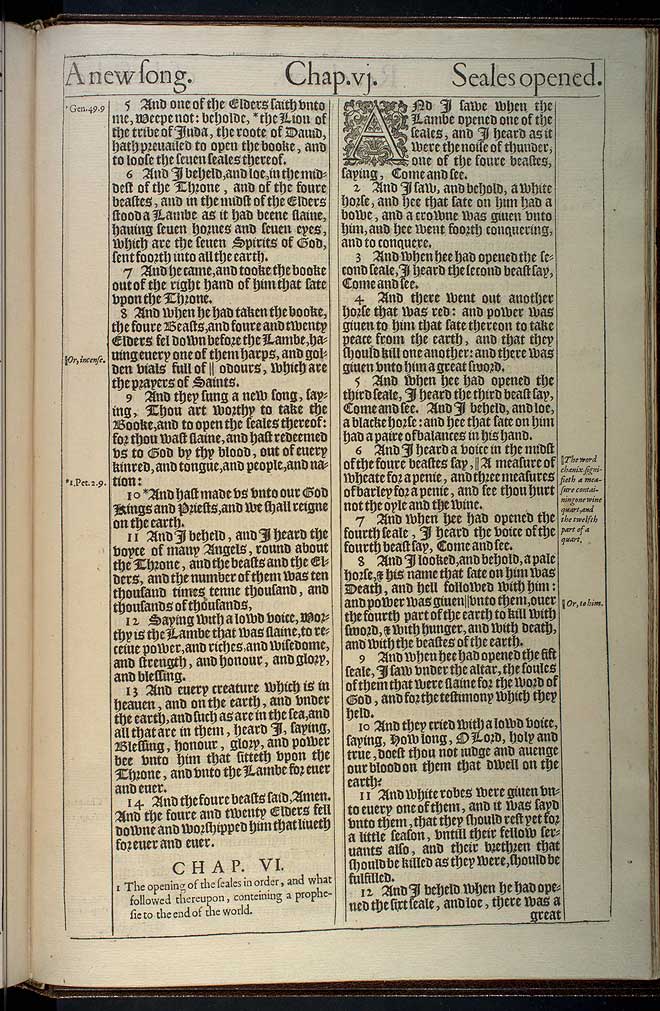 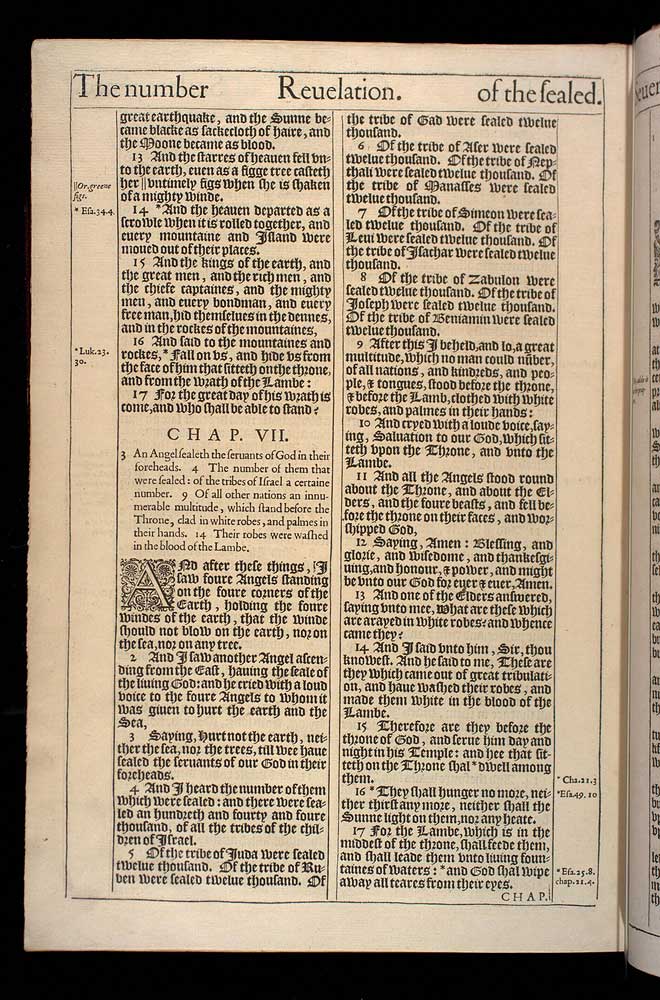 View this Reuelation chapter 6 scan at a larger size

1 The opening of the seales in order, and what followed thereupon, conteining a prophesie to the end of the world.

1 And I sawe when the Lambe opened one of the seales, and I heard as it were the noise of thunder, one of the foure beastes, saying, Come and see.

2 And I saw, and behold, a white horse, and hee that sate on him had a bowe, and a crowne was giuen vnto him, and hee went foorth conquering, and to conquere.

4 And there went out another horse that was red: and power was giuen to him that sate thereon to take peace from the earth, and that they should kill one another: and there was giuen vnto him a great sword.

5 And when hee had opened the third seale, I heard the third beast say, Come and see. And I beheld, and loe, a blacke horse: and hee that sate on him had a paire of balances in his hand.

7 And when hee had opened the fourth seale, I heard the voice of the fourth beast say, Come and see.

8 And I looked, and behold, a pale horse, & his name that sate on him was Death, and hell followed with him: and power was giuen vnto them, ouer the fourth part of the earth to kill with sword, & with hunger, and with death, and with the beastes of the earth.8

9 And when hee had opened the fift seale, I saw vnder the altar, the soules of them that were slaine for the word of God, and for the testimony which they held.

10 And they cried with a lowd voice, saying, How long, O Lord, holy and true, doest thou not iudge and auenge our blood on them that dwell on the earth?

11 And white robes were giuen vnto euery one of them, and it was sayd vnto them, that they should rest yet for a little season, vntill their fellow seruants also, and their brethren that should be killed as they were, should be fulfilled.

12 And I beheld when he had opened the sixt seale, and loe, there was a great earthquake, and the Sunne became blacke as sackecloth of haire, and the Moone became as blood.

13 And the starres of heauen fell vnto the earth, euen as a figge tree casteth her vntimely figs when she is shaken of a mighty winde.13

14 And the heauen departed as a scrowle when it is rolled together, and euery mountaine and Island were moued out of their places.14

15 And the kings of the earth, and the great men, and the rich men, and the chiefe captaines, and the mighty men, and euery bondman, and euery free man, hid themselues in the dennes, and in the rockes of the mountaines,

16 And said to the mountaines and rockes, Fall on vs, and hide vs from the face of him that sitteth on the throne, and from the wrath of the Lambe:16

17 For the great day of his wrath is come, and who shall be able to stand?