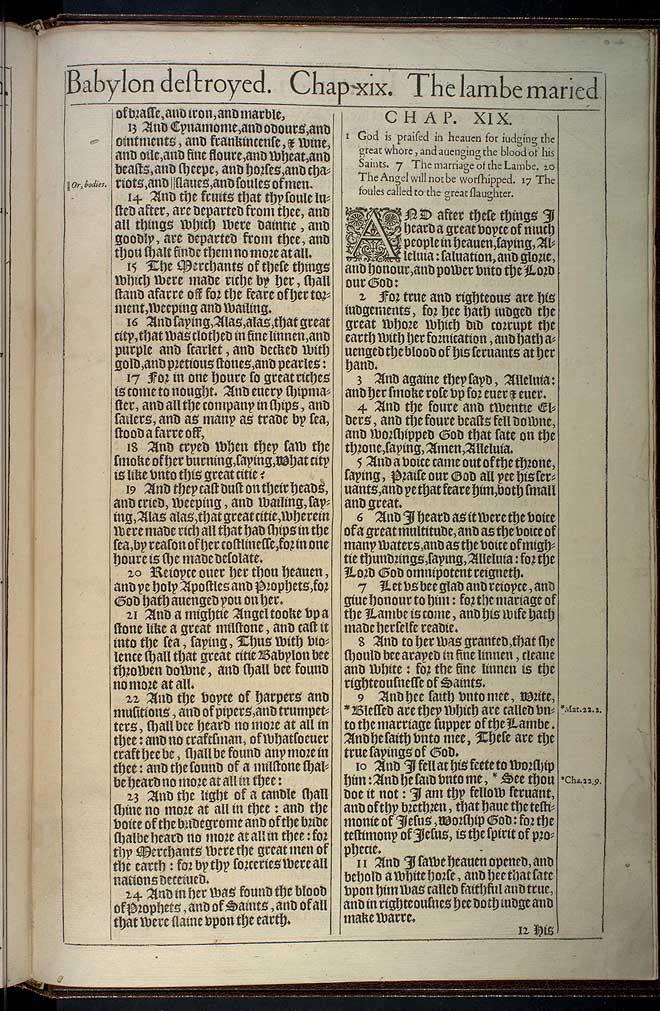 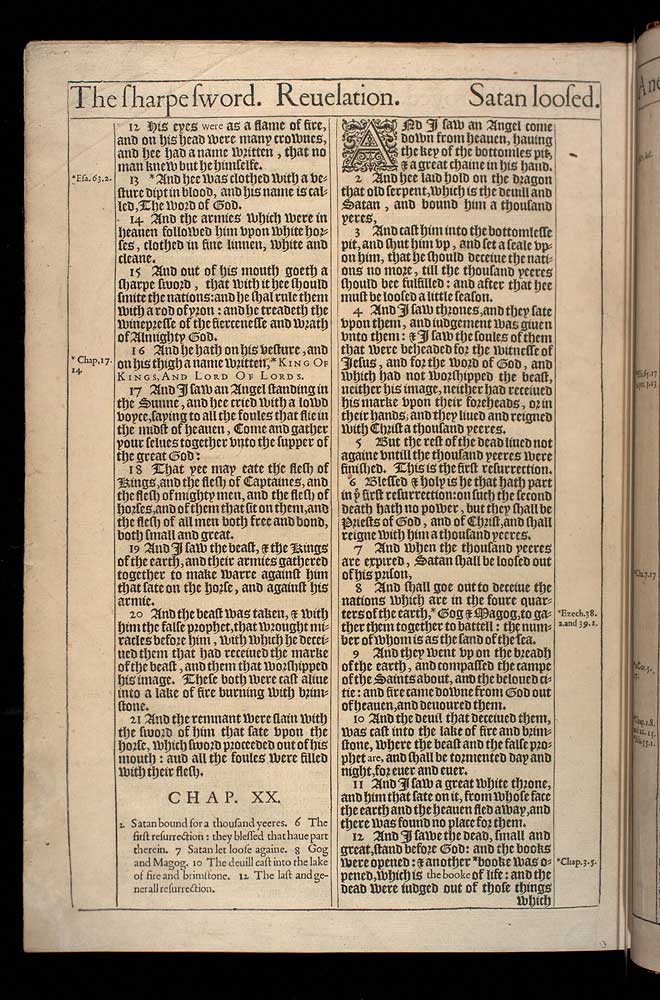 View this Reuelation chapter 19 scan at a larger size

1 God is praised in heauen for iudging the great whore, and auenging the blood of his Saints. 7 The marriage of the Lambe. 20 The Angel will not be worshipped. 17 The foules called to the great slaughter.

1 And after these things I heard a great voyce of much people in heauen, saying, Alleluia: saluation, and glorie, and honour, and power vnto the Lord our God:

2 For true and righteous are his iudgements, for hee hath iudged the great whore which did corrupt the earth with her fornication, and hath auenged the blood of his seruants at her hand.

3 And againe they sayd, Alleluia: and her smoke rose vp for euer & euer.

4 And the foure and twentie Elders, and the foure beasts fell downe, and worshipped God that sate on the throne, saying, Amen, Alleluia.

5 And a voice came out of the throne, saying, Praise our God all yee his seruants, and ye that feare him, both small and great.

7 Let vs bee glad and reioyce, and giue honour to him: for the mariage of the Lambe is come, and his wife hath made herselfe readie.

8 And to her was granted, that she should bee arayed in fine linnen, cleane and white: for the fine linnen is the righteousnesse of Saints.

10 And I fell at his feete to worship him: And he said vnto me, See thou doe it not: I am thy fellow seruant, and of thy brethren, that haue the testimonie of Iesus, Worship God: for the testimony of Iesus, is the spirit of prophecie.10

11 And I sawe heauen opened, and behold a white horse, and hee that sate vpon him was called faithful and true, and in righteousnes hee doth iudge and make warre.

12 His eyes were as a flame of fire, and on his head were many crownes, and hee had a name written, that no man knew but he himselfe.

13 And hee was clothed with a vesture dipt in blood, and his name is called, The word of God.13

14 And the armies which were in heauen followed him vpon white horses, clothed in fine linnen, white and cleane.

15 And out of his mouth goeth a sharpe sword, that with it hee should smite the nations: and he shal rule them with a rod of yron: and he treadeth the winepresse of the fiercenesse and wrath of Almighty God.

16 And he hath on his vesture, and on his thigh a name written, King Of Kings, And Lord Of Lords.16

17 And I saw an Angel standing in the Sunne, and hee cried with a lowd voyce, saying to all the foules that flie in the midst of heauen, Come and gather your selues together vnto the supper of the great God:

19 And I saw the beast, & the Kings of the earth, and their armies gathered together to make warre against him that sate on the horse, and against his armie.

20 And the beast was taken, & with him the false prophet, that wrought miracles before him, with which he deceiued them that had receiued the marke of the beast, and them that worshipped his image. These both were cast aliue into a lake of fire burning with brimstone.

21 And the remnant were slain with the sword of him that sate vpon the horse, which sword proceeded out of his mouth: and all the foules were filled with their flesh.