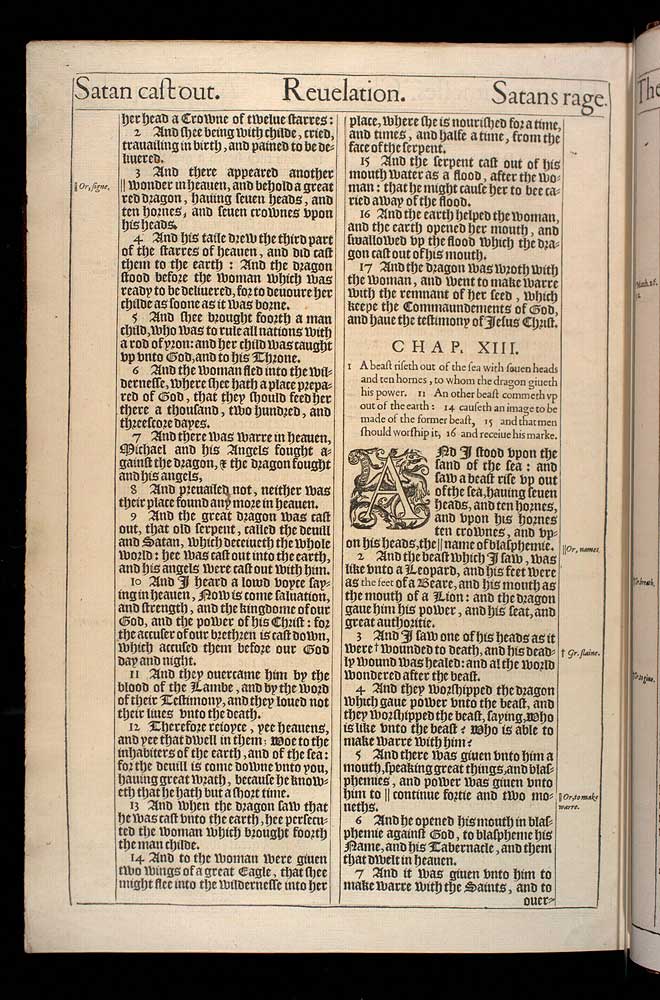 View this Reuelation chapter 12 scan at a larger size

1 A woman clothed with the Sunne trauaileth. 4 The great red dragon standeth before her, ready to deuoure her child: 6 when she was deliuered she fleeth into the wildernes. 7 Michael and his Angels fight with the dragon, and preuaile. 13 The dragon being cast down into the earth, persecuteth the woman.

1 And there appeared a great wonder in heauen, a woman clothed with the Sunne, & the Moone vnder her feete, and vpon her head a Crowne of twelue starres:1

2 And shee being with childe, cried, trauailing in birth, and pained to be deliuered.

3 And there appeared another wonder in heauen, and behold a great red dragon, hauing seuen heads, and ten hornes, and seuen crownes vpon his heads.3

4 And his taile drew the third part of the starres of heauen, and did cast them to the earth: And the dragon stood before the woman which was ready to be deliuered, for to deuoure her childe as soone as it was borne.

5 And shee brought foorth a man child, who was to rule all nations with a rod of yron: and her child was caught vp vnto God, and to his Throne.

6 And the woman fled into the wildernesse, where shee hath a place prepared of God, that they should feed her there a thousand, two hundred, and threescore dayes.

7 And there was warre in heauen, Michael and his Angels fought against the dragon, & the dragon fought and his angels,

8 And preuailed not, neither was their place found any more in heauen.

9 And the great dragon was cast out, that old serpent, called the deuill and Satan, which deceiueth the whole world: hee was cast out into the earth, and his angels were cast out with him.

10 And I heard a lowd voyce saying in heauen, Now is come saluation, and strength, and the kingdome of our God, and the power of his Christ: for the accuser of our brethren is cast down, which accused them before our God day and night.

11 And they ouercame him by the blood of the Lambe, and by the word of their Testimony, and they loued not their liues vnto the death.

12 Therefore reioyce, yee heauens, and yee that dwell in them; Woe to the inhabiters of the earth, and of the sea: for the deuill is come downe vnto you, hauing great wrath, because he knoweth that he hath but a short time.

13 And when the dragon saw that he was cast vnto the earth, hee persecuted the woman which brought foorth the man childe.

14 And to the woman were giuen two wings of a great Eagle, that shee might flee into the wildernesse into her place, where she is nourished for a time, and times, and halfe a time, from the face of the serpent.

15 And the serpent cast out of his mouth water as a flood, after the woman: that he might cause her to bee caried away of the flood.

16 And the earth helped the woman, and the earth opened her mouth, and swallowed vp the flood which the dragon cast out of his mouth.

17 And the dragon was wroth with the woman, and went to make warre with the remnant of her seed, which keepe the Commaundements of God, and haue the testimony of Iesus Christ.