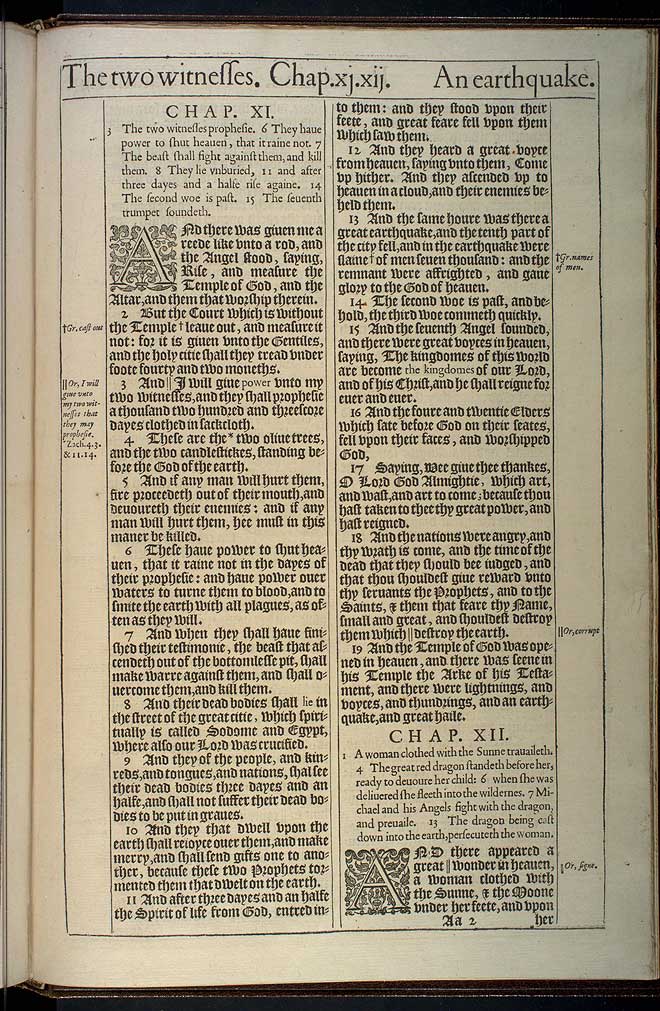 View this Reuelation chapter 11 scan at a larger size

3 The two witnesses Prophesie. 6 They haue power to shut heauen, that it raine not. 7 The beast shall fight against them, and kill them. 8 They lie vnburied, 11 and after three dayes and a halfe rise againe. 14 The second woe is past. 15 The seuenth trumpet soundeth.

1 And there was giuen me a reede like vnto a rod, and the Angel stood, saying, Rise, and measure the Temple of God, and the Altar, and them that worship therein.

2 But the Court which is without the Temple leaue out, and measure it not: for it is giuen vnto the Gentiles, and the holy citie shall they tread vnder foote fourty and two moneths.2

3 And I will giue power vnto my two witnesses, and they shall prophesie a thousand two hundred and threescore dayes clothed in sackcloth.3

4 These are the two oliue trees, and the two candlestickes, standing before the God of the earth.4

6 These haue power to shut heauen, that it raine not in the dayes of their prophesie: and haue power ouer waters to turne them to blood, and to smite the earth with all plagues, as often as they will.

7 And when they shall haue finished their testimonie, the beast that ascendeth out of the bottomlesse pit, shall make warre against them, and shall ouercome them, and kill them.

8 And their dead bodies shall lie in the street of the great citie, which spiritually is called Sodome and Egypt, where also our Lord was crucified.

10 And they that dwell vpon the earth shall reioyce ouer them, and make merry, and shall send gifts one to another, because these two Prophets tormented them that dwelt on the earth.

11 And after three dayes and an halfe the Spirit of life from God, entred into them: and they stood vpon their feete, and great feare fell vpon them which saw them.

12 And they heard a great voyce from heauen, saying vnto them, Come vp hither. And they ascended vp to heauen in a cloud, and their enemies beheld them.

13 And the same houre was there a great earthquake, and the tenth part of the city fell, and in the earthquake were slaine of men seuen thousand: and the remnant were affrighted, and gaue glory to the God of heauen.13

14 The second woe is past, and behold, the third woe commeth quickly.

15 And the seuenth Angel sounded, and there were great voyces in heauen, saying, The kingdomes of this world are become the kingdomes of our Lord, and of his Christ, and he shall reigne for euer and euer.

16 And the foure and twentie Elders which sate before God on their seates, fell vpon their faces, and worshipped God,

17 Saying, Wee giue thee thankes, O Lord God Almightie, which art, and wast, and art to come; because thou hast taken to thee thy great power, and hast reigned.

18 And the nations were angry, and thy wrath is come, and the time of the dead that they should bee iudged, and that thou shouldest giue reward vnto thy seruants the Prophets, and to the Saints, & them that feare thy Name, small and great, and shouldest destroy them which destroy the earth.18

19 And the Temple of God was opened in heauen, and there was seene in his Temple the Arke of his Testament, and there were lightnings, and voyces, and thundrings, and an earthquake, and great haile.