Viewing the 1611 King James Version of Reuelation (Revelation) Chapter 1, also known as: THE REVELATION of S. Iohn the Diuine. , Revelation, Revelations, Rev, Re, The Revelation,. 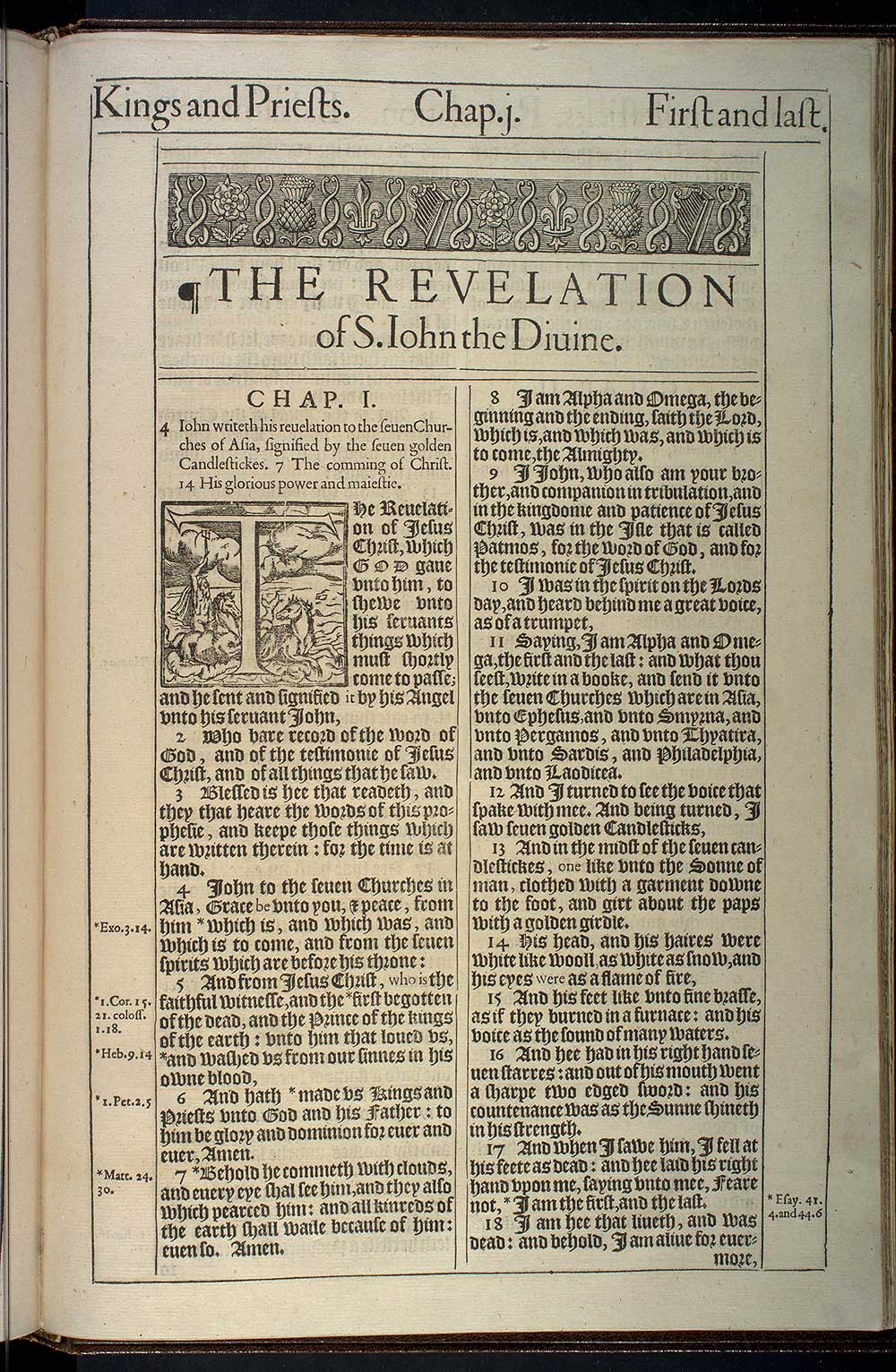 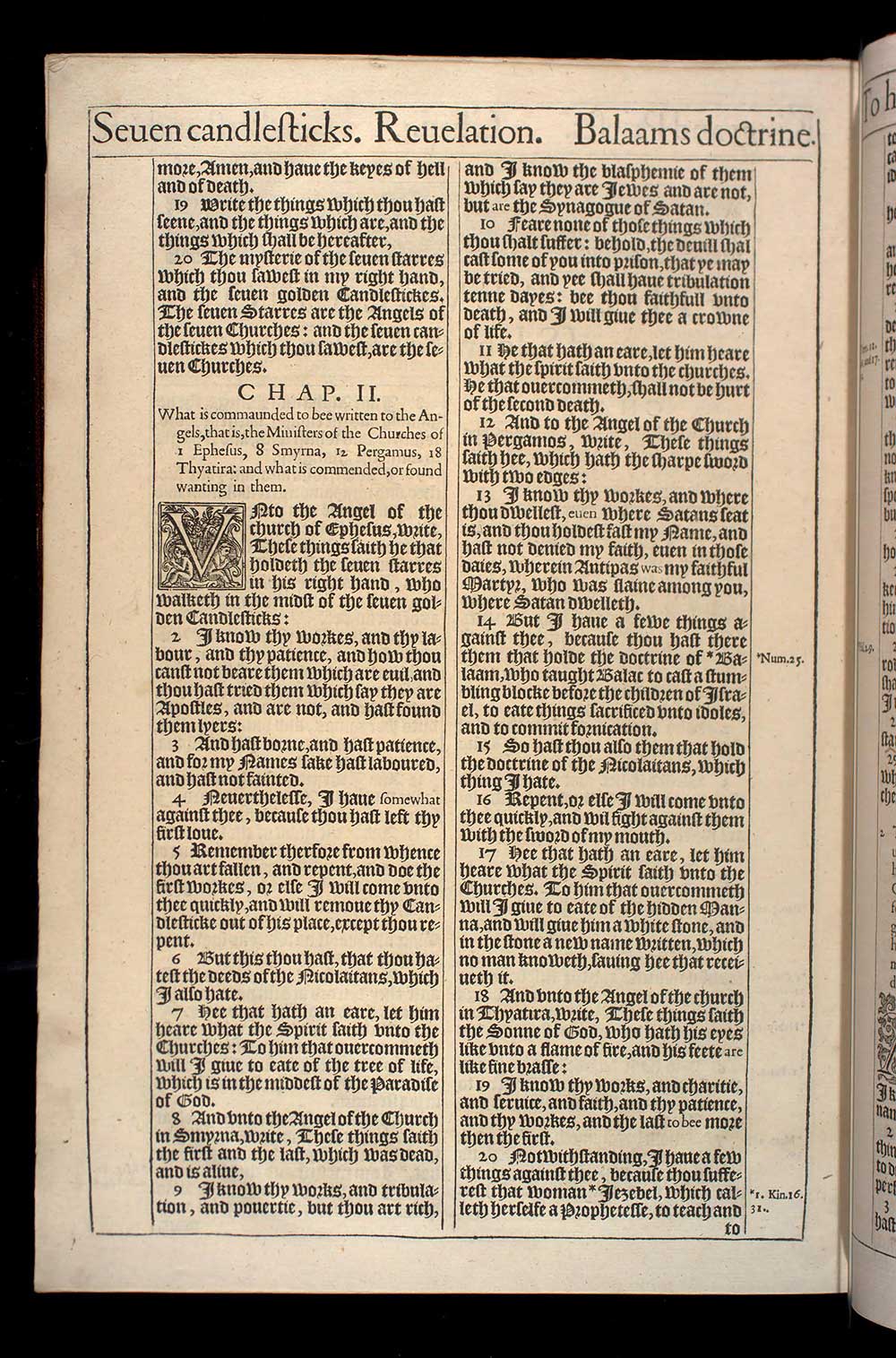 4 Iohn writeth his reuelation to the seuen Churches of Asia, signified by the seuen golden Candlestickes. 7 The comming of Christ. 14 His glorious power and maiestie.

1The Reuelation of Iesus Christ, which God gaue vnto him, to shewe vnto his seruants things which must shortly come to passe; and he sent and signified it by his Angel vnto his seruant Iohn,

2Who bare record of the word of God, and of the testimonie of Iesus Christ, and of all things that he saw.

3Blessed is hee that readeth, and they that heare the words of this prophesie, and keepe those things which are written therein: for the time is at hand.

4Iohn to the seuen Churches in Asia, Grace be vnto you, & peace, from him which is, and which was, and which is to come, and from the seuen spirits which are before his throne:4

5And from Iesus Christ, who is the faithful witnesse, and the first begotten of the dead, and the Prince of the kings of the earth: vnto him that loued vs, and washed vs from our sinnes in his owne blood,5

6And hath made vs Kings and Priests vnto God and his Father: to him be glory and dominion for euer and euer, Amen.6

7Behold he commeth with clouds, and euery eye shal see him, and they also which pearced him: and all kinreds of the earth shall waile because of him: euen so. Amen.7

8I am Alpha and Omega, the beginning and the ending, saith the Lord, which is, and which was, and which is to come, the Almighty.

9I Iohn, who also am your brother, and companion in tribulation, and in the kingdome and patience of Iesus Christ, was in the Isle that is called Patmos, for the word of God, and for the testimonie of Iesus Christ.

10I was in the spirit on the Lords day, and heard behind me a great voice, as of a trumpet,

11Saying, I am Alpha and Omega, the first and the last: and what thou seest, write in a booke, and send it vnto the seuen Churches which are in Asia, vnto Ephesus, and vnto Smyrna, and vnto Pergamos, and vnto Thyatira, and vnto Sardis, and Philadelphia, and vnto Laodicea.

12And I turned to see the voice that spake with mee. And being turned, I saw seuen golden Candlesticks,

13And in the midst of the seuen candlestickes, one like vnto the Sonne of man, clothed with a garment downe to the foot, and girt about the paps with a golden girdle.

14His head, and his haires were white like wooll as white as snow, and his eyes were as a flame of fire,

15And his feet like vnto fine brasse, as if they burned in a furnace: and his voice as the sound of many waters.

16And hee had in his right hand seuen starres: and out of his mouth went a sharpe two edged sword: and his countenance was as the Sunne shineth in his strength.

17And when I sawe him, I fell at his feete as dead: and hee laid his right hand vpon me, saying vnto mee, Feare not, I am the first, and the last.17

18I am hee that liueth, and was dead: and behold, I am aliue for euermore, Amen, and haue the keyes of hell and of death.