Viewing the 1611 King James Version of Reuelation (Revelation) Chapter 17, also known as: THE REVELATION of S. Iohn the Diuine. , Revelation, Revelations, Rev, Re, The Revelation,. 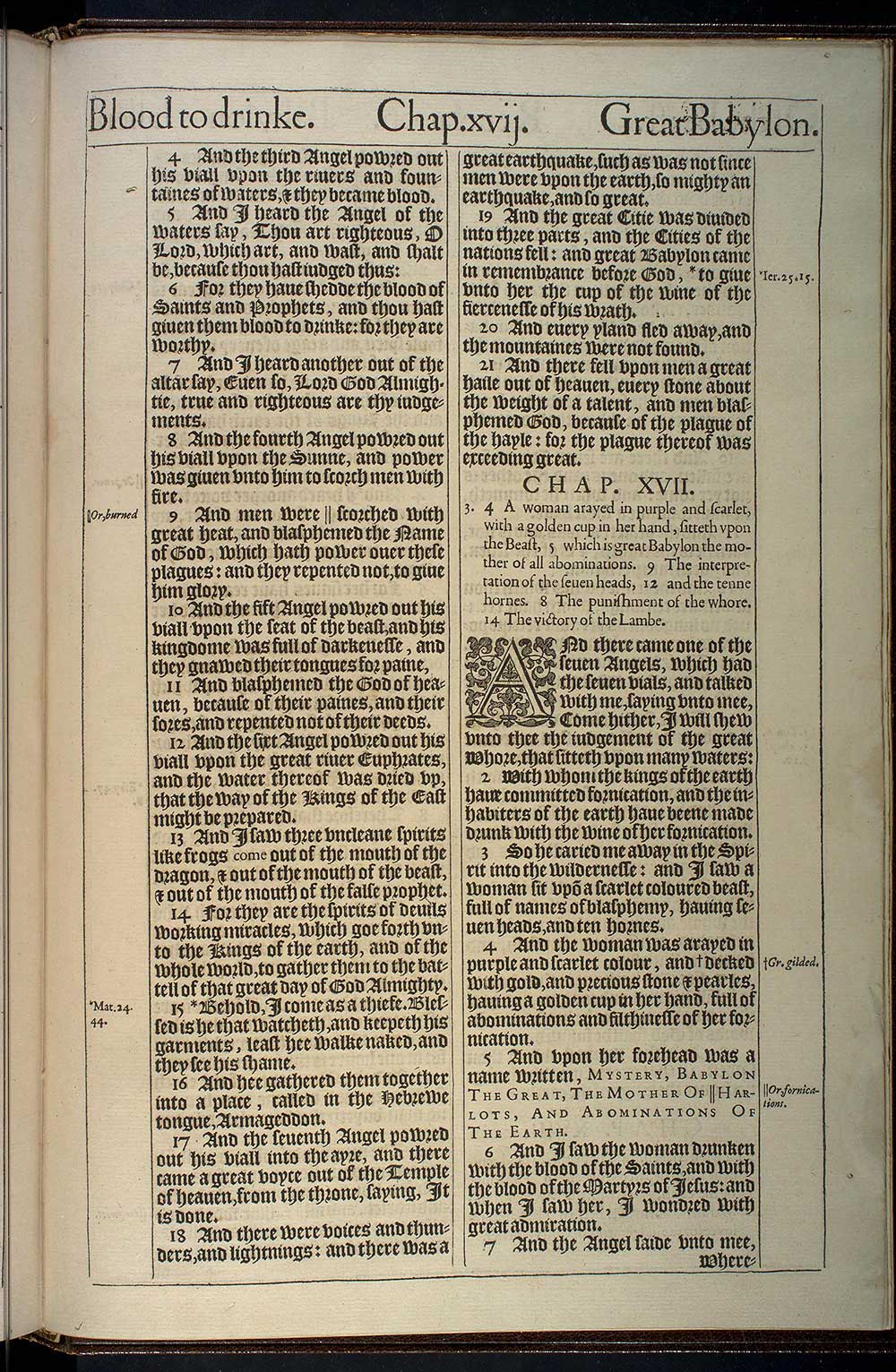 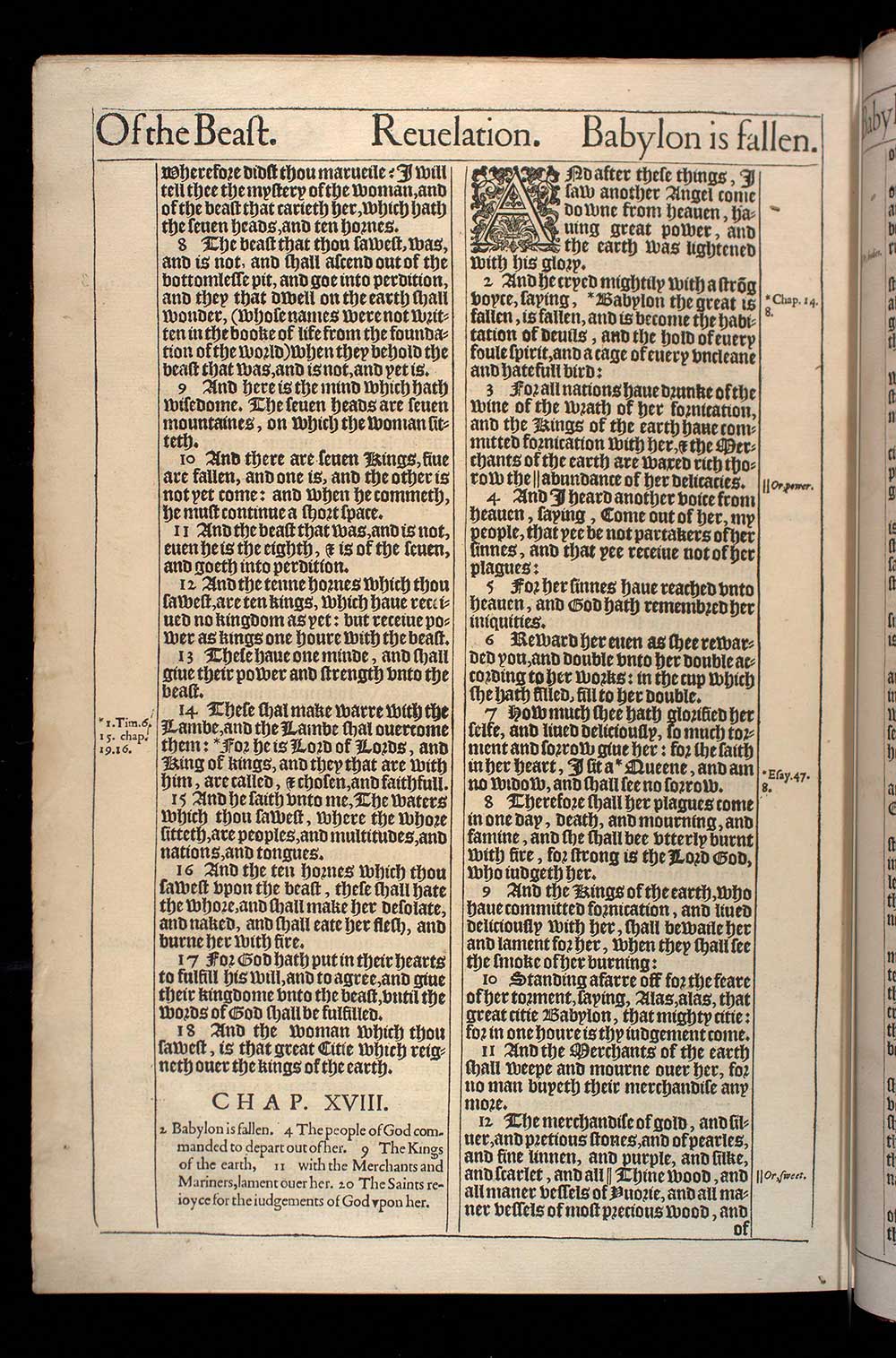 3. 4 A woman arayed in purple and scarlet, with a golden cup in her hand, sitteth vpon the Beast, 5 which is great Babylon the mother of all abominations. 9 The interpretation of the seuen heads, 12 and the tenne hornes. 8 The punishment of the whore. 14 The victory of the Lambe.

1And there came one of the seuen Angels, which had the seuen vials, and talked with me, saying vnto mee, Come hither, I will shew vnto thee the iudgement of the great Whore, that sitteth vpon many waters:

3So he caried me away in the Spirit into the wildernesse: and I saw a woman sit vpō a scarlet coloured beast, full of names of blasphemy, hauing seuen heads, and ten hornes.

4And the woman was arayed in purple and scarlet colour, and decked with gold, and precious stone & pearles, hauing a golden cup in her hand, full of abominations and filthinesse of her fornication.4

5And vpon her forehead was a name written, Mystery, Babylon The Great, The Mother Of Harlots, And Abominations Of The Earth.5

7And the Angel saide vnto mee, Wherefore didst thou marueile? I will tell thee the mystery of the woman, and of the beast that carieth her, which hath the seuen heads, and ten hornes.

9And here is the mind which hath wisedome. The seuen heads are seuen mountaines, on which the woman sitteth.

10And there are seuen Kings, fiue are fallen, and one is, and the other is not yet come: and when he commeth, he must continue a short space.

11And the beast that was, and is not, euen he is the eighth, & is of the seuen, and goeth into perdition.

12And the tenne hornes which thou sawest, are ten kings, which haue receiued no kingdom as yet: but receiue power as kings one houre with the beast.

13These haue one minde, and shall giue their power and strength vnto the beast.

14These shal make warre with the Lambe, and the Lambe shal ouercome them: For he is Lord of Lords, and King of kings, and they that are with him, are called, & chosen, and faithfull.14

15And he saith vnto me, The waters which thou sawest, where the whore sitteth, are peoples, and multitudes, and nations, and tongues.

16And the ten hornes which thou sawest vpon the beast, these shall hate the whore, and shall make her desolate, and naked, and shall eate her flesh, and burne her with fire.

17For God hath put in their hearts to fulfill his will, and to agree, and giue their kingdome vnto the beast, vntil the words of God shall be fulfilled.

18And the woman which thou sawest, is that great Citie which reigneth ouer the kings of the earth.