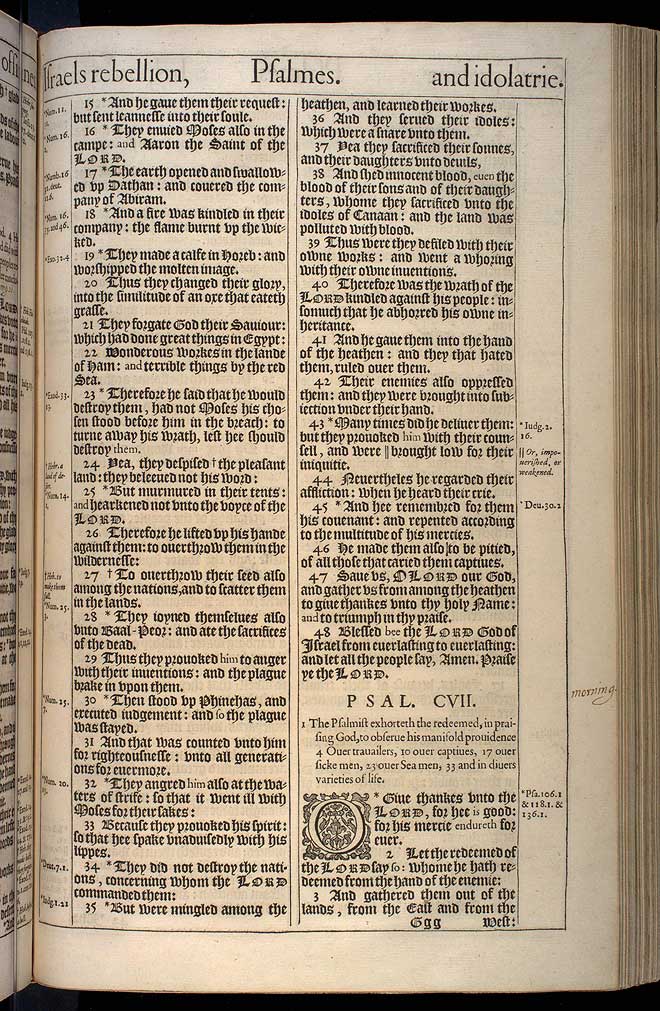 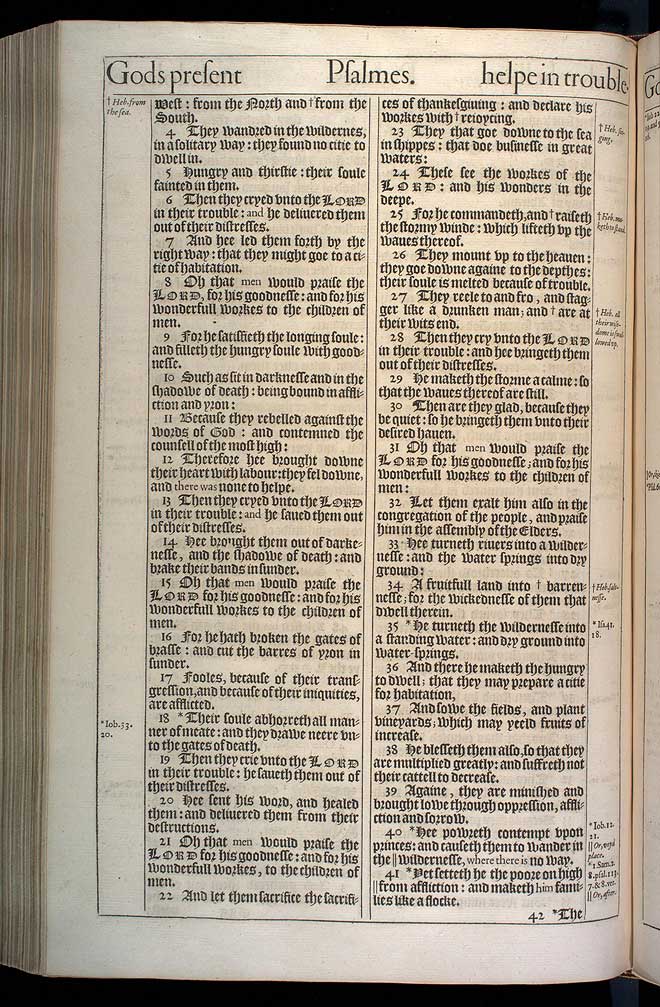 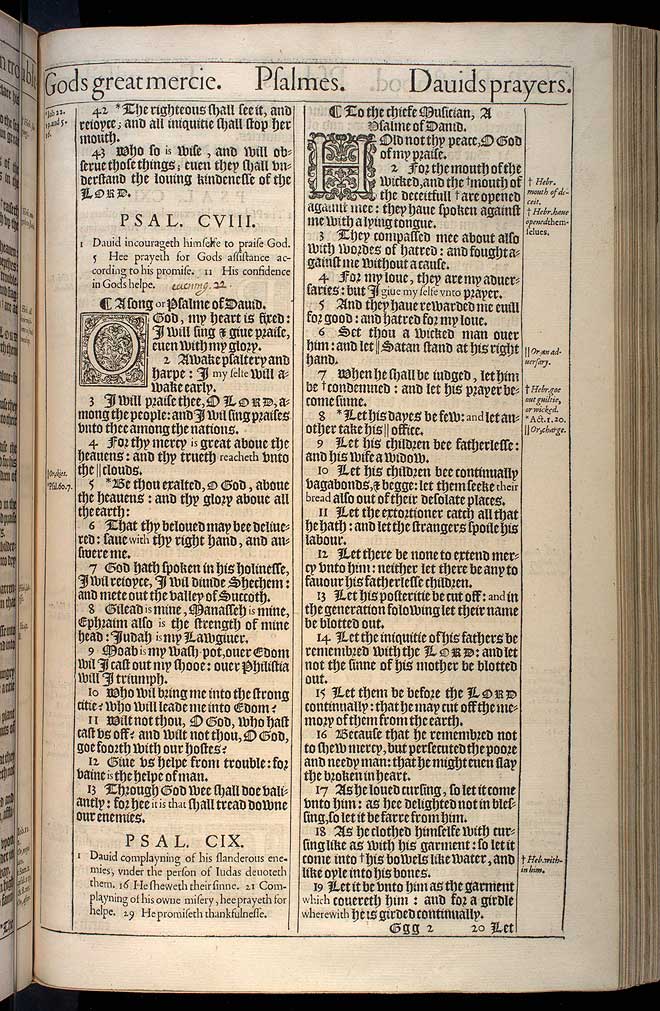 View this Psalmes chapter 107 scan at a larger size

1 O giue thankes vnto the Lord, for hee is good: for his mercie endureth for euer.1

2 Let the redeemed of the Lord say so: whome he hath redeemed from the hand of the enemie:

4 They wandred in the wildernes, in a solitary way: they found no citie to dwell in.

5 Hungry and thirstie: their soule fainted in them.

6 Then they cryed vnto the Lord in their trouble: and he deliuered them out of their distresses.

7 And hee led them forth by the right way: that they might goe to a citie of habitation.

8 Oh that men would praise the Lord, for his goodnesse: and for his wonderfull workes to the children of men.

9 For he satisfieth the longing soule: and filleth the hungry soule with goodnesse.

10 Such as sit in darknesse and in the shadowe of death: being bound in affliction and yron:

11 Because they rebelled against the words of God: and contemned the counsell of the most high:

12 Therefore hee brought downe their heart with labour: they fel downe, and there was none to helpe.

13 Then they cryed vnto the Lord in their trouble: and he saued them out of their distresses.

14 Hee brought them out of darkenesse, and the shadowe of death: and brake their bands insunder.

15 Oh that men would praise the Lord for his goodnesse: and for his wonderfull workes to the children of men.

16 For he hath broken the gates of brasse: and cut the barres of yron in sunder.

18 Their soule abhorreth all manner of meate: and they drawe neere vnto the gates of death.18

19 Then they crie vnto the Lord in their trouble: he saueth them out of their distresses.

20 Hee sent his word, and healed them: and deliuered them from their destructions.

21 Oh that men would praise the Lord for his goodnesse: and for his wonderfull workes, to the children of men.

22 And let them sacrifice the sacrifices of thankesgiuing: and declare his workes with reioycing.22

23 They that goe downe to the sea in shippes: that doe businesse in great waters:

24 These see the workes of the Lord: and his wonders in the deepe.

25 For he commandeth, and raiseth the stormy winde: which lifteth vp the waues thereof.25

26 They mount vp to the heauen: they goe downe againe to the depthes: their soule is melted because of trouble.

27 They reele to and fro, and stagger like a drunken man; and are at their wits end.27

28 Then they cry vnto the Lord in their trouble: and hee bringeth them out of their distresses.

29 He maketh the storme a calme: so that the waues thereof are still.

30 Then are they glad, because they be quiet: so he bringeth them vnto their desired hauen.

31 Oh that men would praise the Lord for his goodnesse; and for his wonderfull workes to the children of men:

32 Let them exalt him also in the congregation of the people, and praise him in the assembly of the Elders.

33 Hee turneth riuers into a wildernesse: and the water springs into dry ground:

34 A fruitfull land into barrennesse; for the wickednesse of them that dwell therein.34

35 He turneth the wildernesse into a standing water: and dry ground into water-springs.35

36 And there he maketh the hungry to dwell; that they may prepare a citie for habitation,

37 And sowe the fields, and plant vineyards; which may yeeld fruits of increase.

38 He blesseth them also, so that they are multiplied greatly: and suffreth not their cattell to decrease.

39 Againe, they are minished and brought lowe through oppression, affliction and sorrow.

40 Hee powreth contempt vpon princes: and causeth them to wander in the wildernesse, where there is no way.40

41 Yet setteth he the poore on high from affliction: and maketh him families like a flocke.41

42 The righteous shall see it, and reioyce; and all iniquitie shall stop her mouth.42

43 Who so is wise, and will obserue those things; euen they shall vnderstand the louing kindenesse of the Lord.