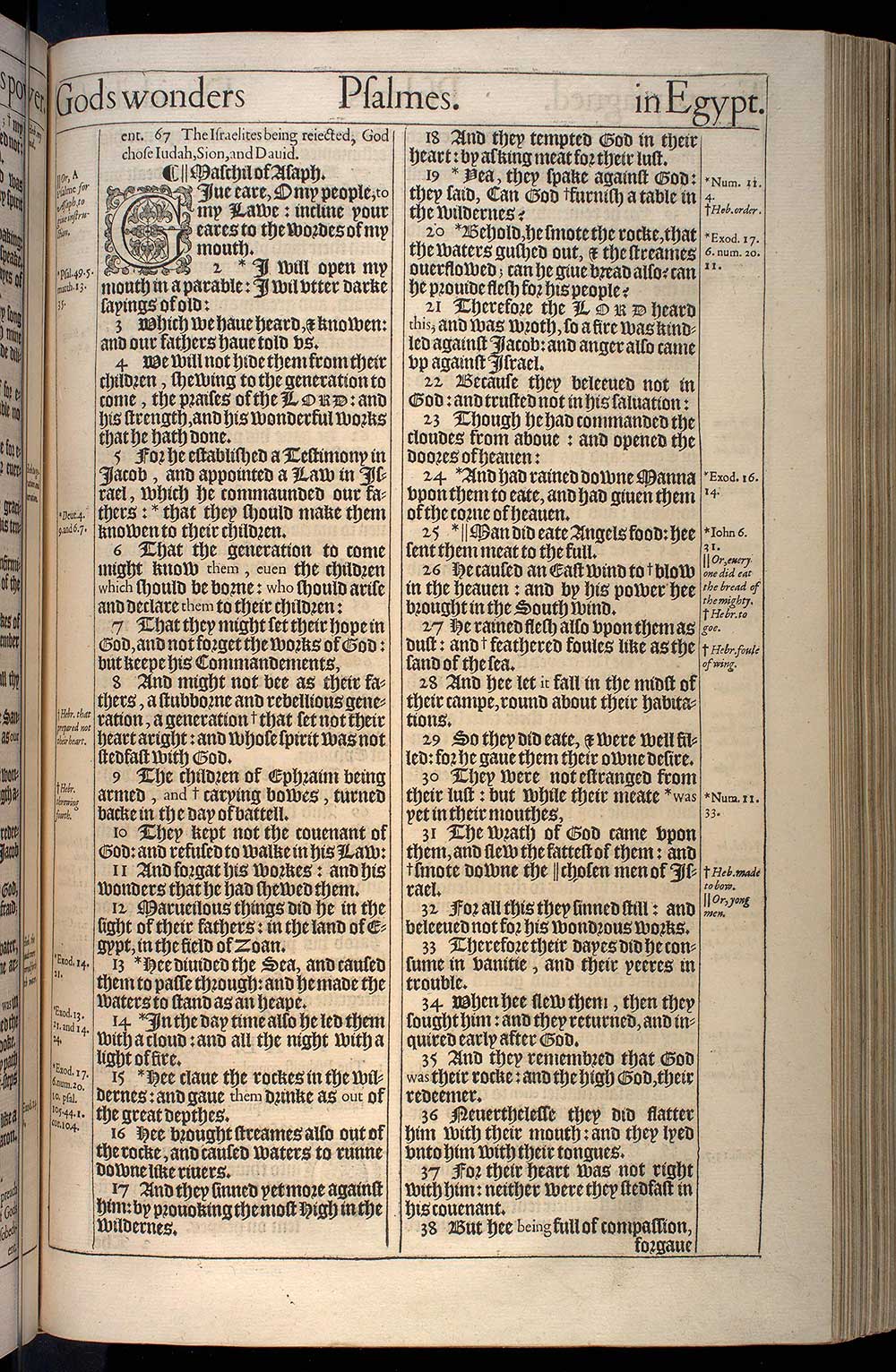 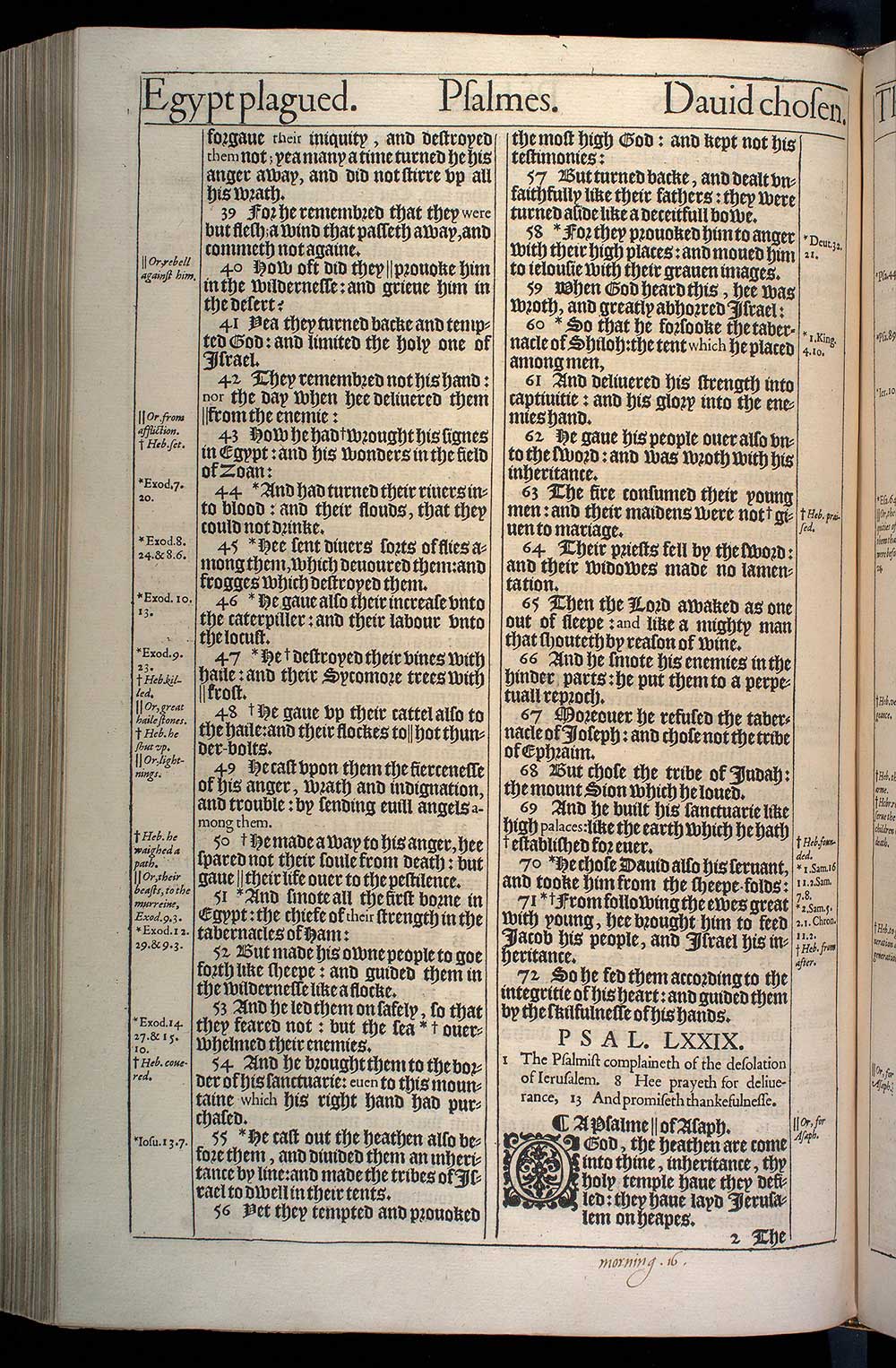 1 An exhortation both to learne and to preach the Law of God. 9 The story of Gods wrath against the incredulous and disobedient. 67 The Israelites being reiected, God chose Iudah, Sion, and Dauid.

1Giue eare, O my people, to my Lawe: incline your eares to the wordes of my mouth.

2I will open my mouth in a parable: I wil vtter darke sayings of old:2

3Which we haue heard, & knowen: and our fathers haue told vs.

4We will not hide them from their children, shewing to the generation to come, the praises of the Lord: and his strength, and his wonderful works that he hath done.

5For he established a Testimony in Iacob, and appointed a Law in Israel, which he commaunded our fathers: that they should make them knowen to their children.5

6That the generation to come might know them, euen the children which should be borne: who should arise and declare them to their children:

7That they might set their hope in God, and not forget the works of God: but keepe his Commandements,

8And might not bee as their fathers, a stubborne and rebellious generation, a generation that set not their heart aright: and whose spirit was not stedfast with God.8

9The children of Ephraim being armed, and carying bowes, turned backe in the day of battell.9

10They kept not the couenant of God: and refused to walke in his Law:

11And forgat his workes: and his wonders that he had shewed them.

12Marueilous things did he in the sight of their fathers: in the land of Egypt, in the field of Zoan.

13Hee diuided the Sea, and caused them to passe through: and he made the waters to stand as an heape.13

14In the day time also he led them with a cloud: and all the night with a light of fire.14

15Hee claue the rockes in the wildernes: and gaue them drinke as out of the great depthes.15

16Hee brought streames also out of the rocke, and caused waters to runne downe like riuers.

17And they sinned yet more against him: by prouoking the most High in the wildernes.

18And they tempted God in their heart: by asking meat for their lust.

19Yea, they spake against God: they said, Can God furnish a table in the wildernes?19

20Behold, he smote the rocke, that the waters gushed out, & the streames ouerflowed; can he giue bread also? can he prouide flesh for his people?20

21Therefore the Lord heard this, and was wroth, so a fire was kindled against Iacob: and anger also came vp against Israel.

22Because they beleeued not in God: and trusted not in his saluation:

23Though he had commanded the cloudes from aboue: and opened the doores of heauen:

24And had rained downe Manna vpon them to eate, and had giuen them of the corne of heauen.24

25Man did eate Angels food: hee sent them meat to the full.25

26He caused an East wind to blow in the heauen: and by his power hee brought in the South wind.26

27He rained flesh also vpon them as dust: and feathered soules like as the sand of the sea.27

28And hee let it fall in the midst of their campe, round about their habitations.

29So they did eate, & were well filled: for he gaue them their owne desire.

30They were not estranged from their lust: but while their meate was yet in their mouthes,30

31The wrath of God came vpon them, and slew the fattest of them: and smote downe the chosen men of Israel.31

32For all this they sinned still: and beleeued not for his wondrous works.

33Therefore their dayes did he consume in vanitie, and their yeeres in trouble.

34When hee slew them, then they sought him: and they returned, and inquired early after God.

35And they remembred that God was their rocke: and the high God, their redeemer.

37For their heart was not right with him: neither were they stedfast in his couenant.

38But hee being full of compassion, forgaue their iniquity, and destroyed them not; yea many a time turned he his anger away, and did not stirre vp all his wrath.

39For he remembred that they were but flesh; a wind that passeth away, and commeth not againe.

41Yea they turned backe and tempted God: and limited the holy one of Israel.

42They remembred not his hand: nor the day when hee deliuered them from the enemie:42

43How he had wrought his signes in Egypt: and his wonders in the field of Zoan:43

44And had turned their riuers into blood: and their flouds, that they could not drinke.44

45Hee sent diuers sorts of flies among them, which deuoured them: and frogges which destroyed them.45

46He gaue also their increase vnto the caterpiller: and their labour vnto the locust.46

47He destroyed their vines with haile: and their Sycomore trees with frost.47

48He gaue vp their cattel also to the haile: and their flockes to hot thunder-bolts.48

49He cast vpon them the fiercenesse of his anger, wrath and indignation, and trouble: by sending euill angels among them.

50He made a way to his anger, hee spared not their soule from death: but gaue their life ouer to the pestilence.50

51And smote all the first borne in Egypt: the chiefe of their strength in the tabernacles of Ham:51

52But made his owne people to goe forth like sheepe: and guided them in the wildernesse like a flocke.

53And he led them on safely, so that they feared not: but the sea ouerwhelmed their enemies.53

54And he brought them to the border of his sanctuarie: euen to this mountaine which his right hand had purchased.

55He cast out the heathen also before them, and diuided them an inheritance by line: and made the tribes of Israel to dwell in their tents.55

56Yet they tempted and prouoked the most high God: and kept not his testimonies:

57But turned backe, and dealt vnfaithfully like their fathers: they were turned aside like a deceitfull bowe.

58For they prouoked him to anger with their high places: and moued him to ielousie with their grauen images.58

59When God heard this, hee was wroth, and greatly abhorred Israel:

60So that he forsooke the tabernacle of Shiloh: the tent which he placed among men,60

61And deliuered his strength into captiuitie: and his glory into the enemies hand.

62He gaue his people ouer also vnto the sword: and was wroth with his inheritance.

63The fire consumed their young men: and their maidens were not giuen to mariage.63

64Their priests fell by the sword: and their widowes made no lamentation.

65Then the Lord awaked as one out of sleepe: and like a mighty man that shouteth by reason of wine.

66And he smote his enemies in the hinder parts: he put them to a perpetuall reproch.

67Moreouer he refused the tabernacle of Ioseph: and chose not the tribe of Ephraim.

68But chose the tribe of Iudah: the mount Sion which he loued.

69And he built his sanctuarie like high palaces: like the earth which he hath established for euer.69

70He chose Dauid also his seruant, and tooke him from the sheepe-folds:70

71From following the ewes great with young, hee brought him to feed Iacob his people, and Israel his inheritance.71

72So he fed them according to the integritie of his heart: and guided them by the skilfulnesse of his hands.