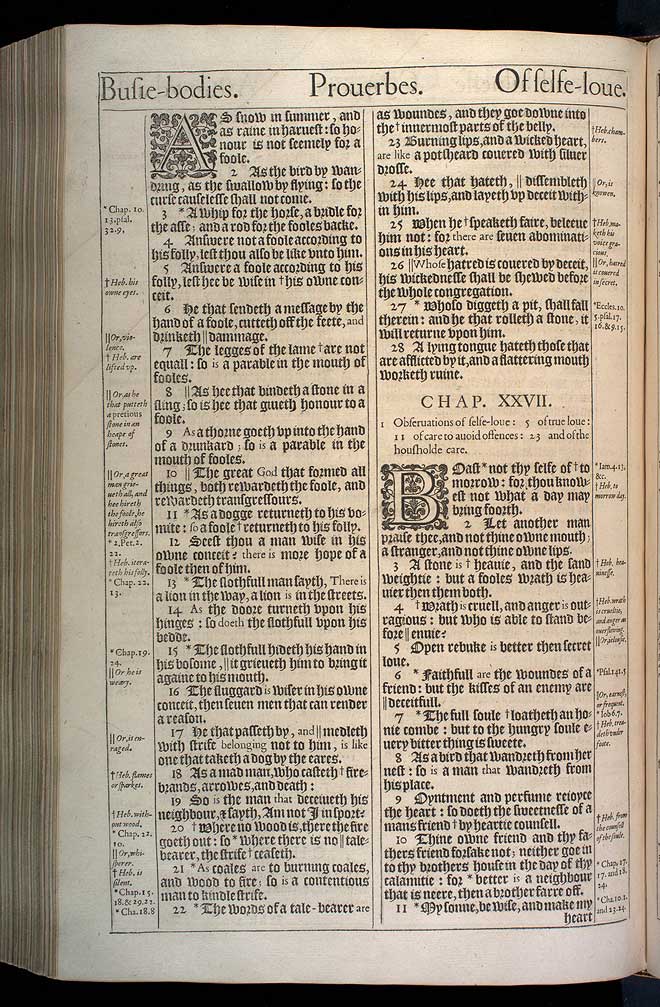 View this Prouerbs chapter 26 scan at a larger size

1 As snow in summer, and as raine in haruest: so honour is not seemely for a foole.

2 As the bird by wandring, as the swallow by flying: so the curse causelesse shall not come.

3 A whip for the horse, a bridle for the asse; and a rod for the fooles backe.3

4 Answere not a foole according to his folly, lest thou also be like vnto him.

5 Answere a foole according to his folly, lest hee be wise in his owne conceit.5

6 He that sendeth a message by the hand of a foole, cutteth off the feete, and drinketh dammage.6

7 The legges of the lame are not equall: so is a parable in the mouth of fooles.7

8 As hee that bindeth a stone in a sling; so is hee that giueth honour to a foole.8

9 As a thorne goeth vp into the hand of a drunkard; so is a parable in the mouth of fooles.

10 The great God that formed all things, both rewardeth the foole, and rewardeth transgressours.10

12 Seest thou a man wise in his owne conceit? there is more hope of a foole then of him.

13 The slothfull man sayth, There is a lion in the way, a lion is in the streets.13

14 As the doore turneth vpon his hinges: so doeth the slothfull vpon his bedde.

15 The slothfull hideth his hand in his bosome, it grieueth him to bring it againe to his mouth.15

16 The sluggard is wiser in his owne conceit, then seuen men that can render a reason.

17 He that passeth by, and medleth with strife belonging not to him, is like one that taketh a dog by the eares.17

18 As a mad man, who casteth firebrands, arrowes, and death:18

19 So is the man that deceiueth his neighbour, & sayth, Am not I in sport?

20 Where no wood is, there the fire goeth out: so where there is no tale-bearer, the strife ceaseth.20

21 As coales are to burning coales, and wood to fire; so is a contentious man to kindle strife.21

22 The words of a tale-bearer are as woundes, and they goe downe into the innermost parts of the belly.22

23 Burning lips, and a wicked heart, are like a potsheard couered with siluer drosse.

24 Hee that hateth, dissembleth with his lips, and layeth vp deceit within him.24

25 When he speaketh faire, beleeue him not: for there are seuen abominations in his heart.25

26 Whose hatred is couered by deceit, his wickednesse shall be shewed before the whole congregation.26

27 Whoso diggeth a pit, shall fall therein: and he that rolleth a stone, it will returne vpon him.27

28 A lying tongue hateth those that are afflicted by it, and a flattering mouth worketh ruine.