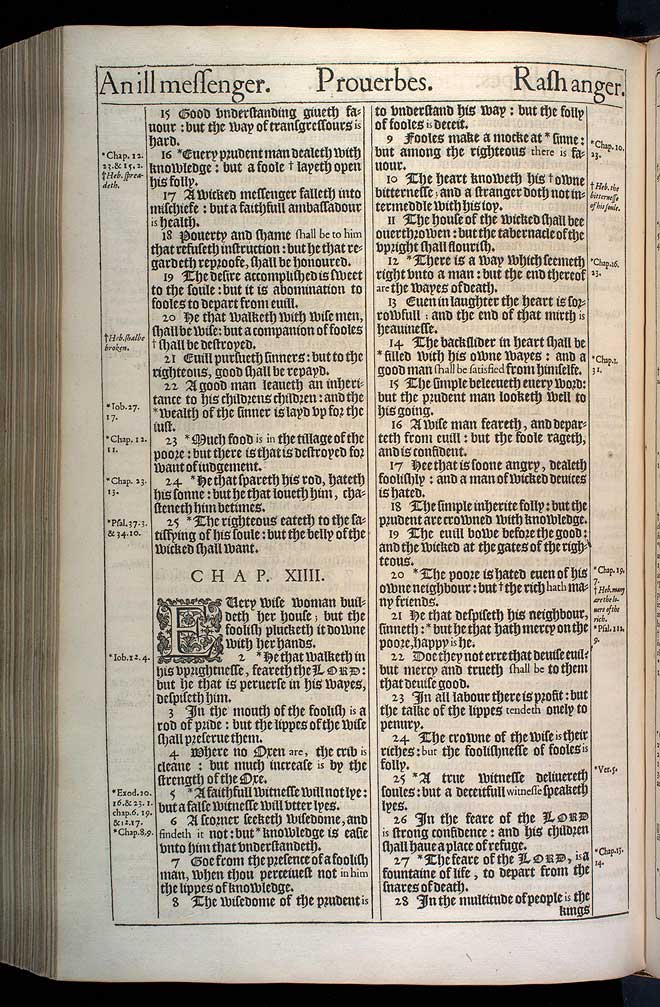 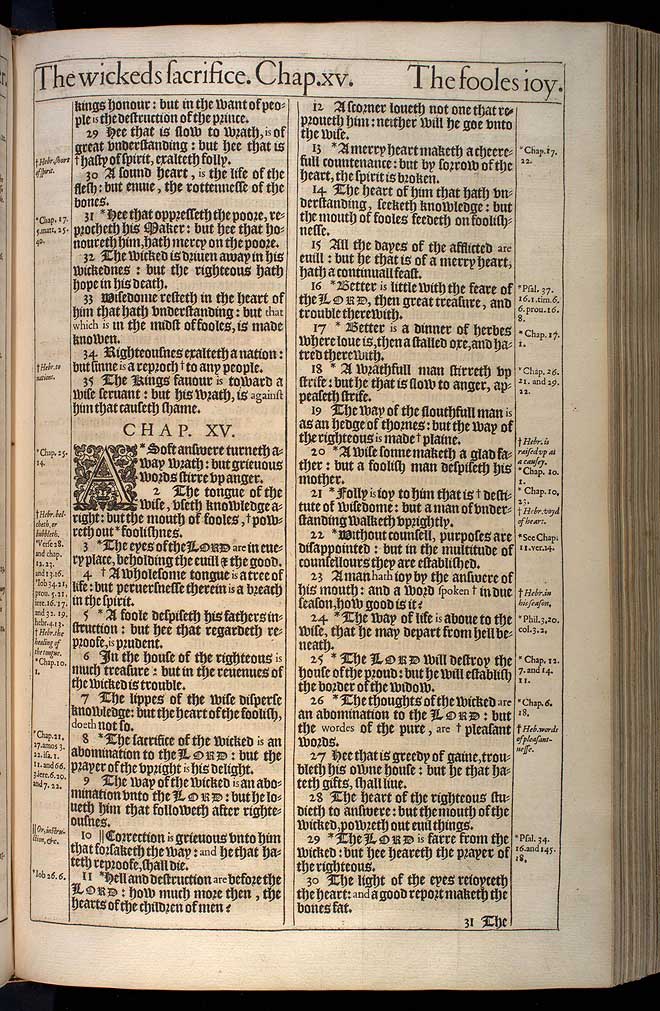 View this Prouerbs chapter 14 scan at a larger size

1 Euery wise woman buildeth her house; but the foolish plucketh it downe with her hands.

2 He that walketh in his vprightnesse, feareth the Lord: but he that is peruerse in his wayes, despiseth him.2

3 In the mouth of the foolish is a rod of pride: but the lippes of the wise shall preserue them.

4 Where no Oxen are, the crib is cleane: but much increase is by the strength of the Oxe.

6 A scorner seeketh wisedome, and findeth it not: but knowledge is easie vnto him that vnderstandeth.6

7 Goe from the presence of a foolish man, when thou perceiuest not in him the lippes of knowledge.

8 The wisedome of the prudent is to vnderstand his way: but the folly of fooles is deceit.

9 Fooles make a mocke at sinne: but among the righteous there is fauour.9

10 The heart knoweth his owne bitternesse; and a stranger doth not intermeddle with his ioy.10

11 The house of the wicked shall bee ouerthrowen: but the tabernacle of the vpright shall flourish.

12 There is a way which seemeth right vnto a man: but the end thereof are the wayes of death.12

13 Euen in laughter the heart is sorrowfull; and the end of that mirth is heauinesse.

14 The backslider in heart shall be filled with his owne wayes: and a good man shall be satisfied from himselfe.14

15 The simple beleeueth euery word: but the prudent man looketh well to his going.

16 A wise man feareth, and departeth from euill: but the foole rageth, and is confident.

17 Hee that is soone angry, dealeth foolishly: and a man of wicked deuices is hated.

18 The simple inherite folly: but the prudent are crowned with knowledge.

19 The euill bowe before the good: and the wicked at the gates of the righteous.

20 The poore is hated euen of his owne neighbour: but the rich hath many friends.20

21 He that despiseth his neighbour, sinneth: but he that hath mercy on the poore, happy is he.21

22 Doe they not erre that deuise euil? but mercy and trueth shall be to them that deuise good.

23 In all labour there is profit: but the talke of the lippes tendeth onely to penury.

24 The crowne of the wise is their riches: but the foolishnesse of fooles is folly.

26 In the feare of the Lord is strong confidence: and his children shall haue a place of refuge.

27 The feare of the Lord, is a fountaine of life, to depart from the snares of death.27

29 Hee that is slow to wrath, is of great vnderstanding: but hee that is hasty of spirit, exalteth folly.29

30 A sound heart, is the life of the flesh: but enuie, the rottennesse of the bones.

31 Hee that oppresseth the poore, reprocheth his Maker: but hee that honoureth him, hath mercy on the poore.31

32 The wicked is driuen away in his wickednes: but the righteous hath hope in his death.

33 Wisedome resteth in the heart of him that hath vnderstanding: but that which is in the midst of fooles, is made knowen.

34 Righteousnes exalteth a nation: but sinne is a reproch to any people.34

35 The Kings fauour is toward a wise seruant: but his wrath, is against him that causeth shame.