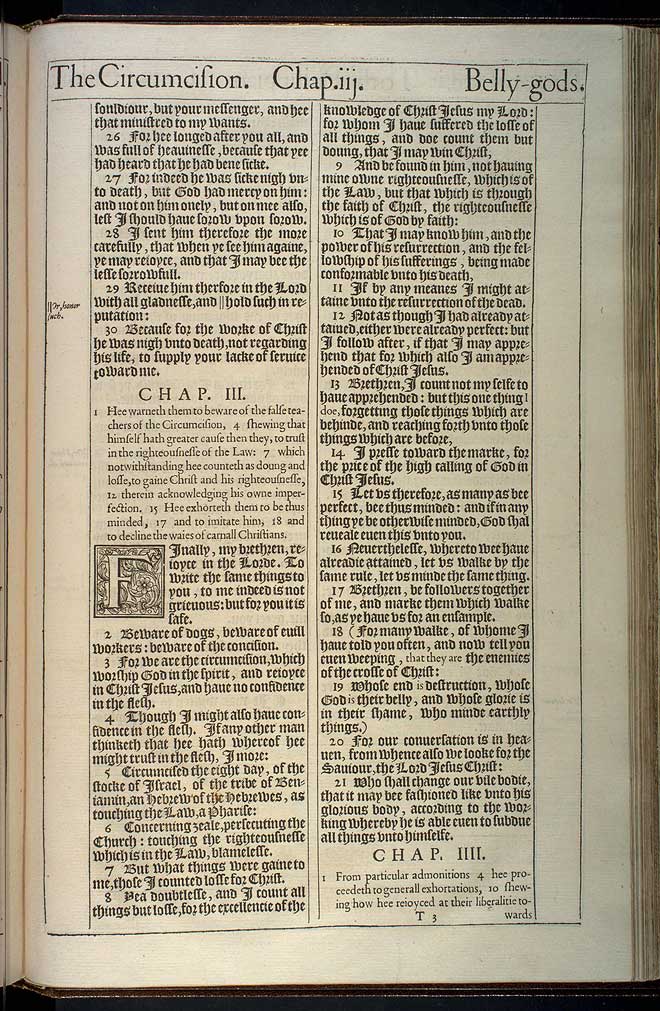 View this Philippians chapter 3 scan at a larger size

1 Hee warneth them to beware of the false teachers of the Circumcision, 4 shewing that himself hath greater cause then they, to trust in the righteousnesse of the Law: 7 which notwithstanding hee counteth as doung and losse, to gaine Christ and his righteousnesse, 12 therein acknowledging his owne imperfection. 15 Hee exhorteth them to be thus minded, 17 and to imitate him, 18 and to decline the waies of carnall Christians.

1 Finally, my brethren, reioyce in the Lorde. To write the same things to you, to me indeed is not grieuous: but for you it is safe.

2 Beware of dogs, beware of euill workers: beware of the concision.

3 For we are the circumcision, which worship God in the spirit, and reioyce in Christ Iesus, and haue no confidence in the flesh.

4 Though I might also haue confidence in the flesh. If any other man thinketh that hee hath whereof hee might trust in the flesh, I more:

5 Circumcised the eight day, of the stocke of Israel, of the tribe of Beniamin, an Hebrew of the Hebrewes, as touching the Law, a Pharise:

6 Concerning zeale, persecuting the Church: touching the righteousnesse which is in the Law, blamelesse.

7 But what things were gaine to me, those I counted losse for Christ.

8 Yea doubtlesse, and I count all things but losse, for the excellencie of the knowledge of Christ Iesus my Lord: for whom I haue suffered the losse of all things, and doe count them but doung, that I may win Christ,

10 That I may know him, and the power of his resurrection, and the fellowship of his sufferings, being made conformable vnto his death,

11 If by any meanes I might attaine vnto the resurrection of the dead.

12 Not as though I had already attained, either were already perfect: but I follow after, if that I may apprehend that for which also I am apprehended of Christ Iesus.

14 I presse toward the marke, for the price of the high calling of God in Christ Iesus.

15 Let vs therefore, as many as bee perfect, bee thus minded: and if in any thing ye be otherwise minded, God shal reueale euen this vnto you.

17 Brethren, be followers together of me, and marke them which walke so, as ye haue vs for an ensample.

18 (For many walke, of whome I haue told you often, and now tell you euen weeping, that they are the enemies of the crosse of Christ:

19 Whose end is destruction, whose God is their belly, and whose glorie is in their shame, who minde earthly things.)

20 For our conuersation is in heauen, from whence also we looke for the Sauiour, the Lord Iesus Christ:

21 Who shall change our vile bodie, that it may bee fashioned like vnto his glorious body, according to the working whereby he is able euen to subdue all things vnto himselfe.