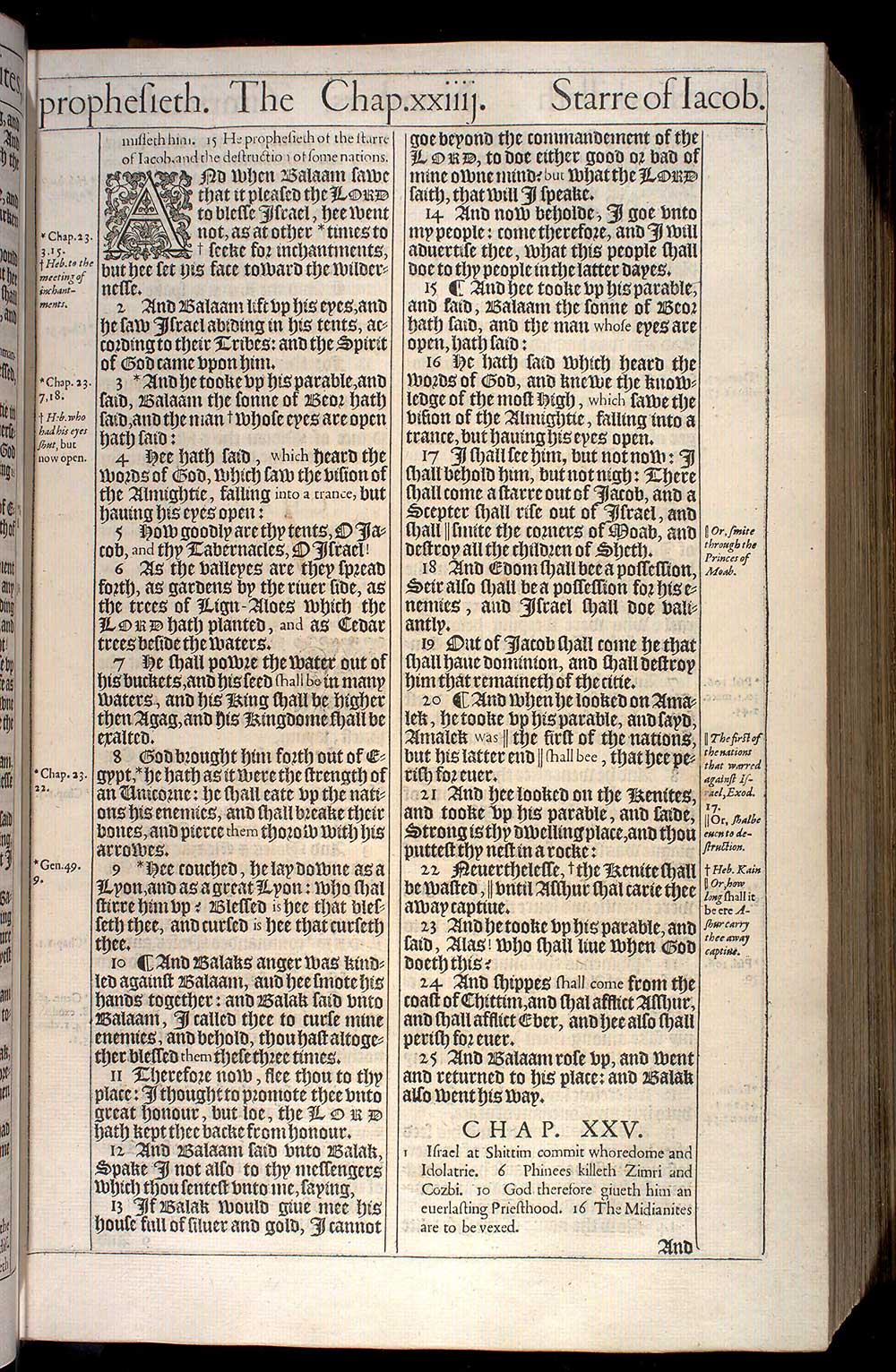 1 Balaam leauing diuinations, prophesieth the happinesse of Israel. 10 Balak in anger dismisseth him. 15 He prophesieth of the starre of Iacob, and the destruction of some nations.

1And when Balaam sawe that it pleased the Lord to blesse Israel, hee went not, as at other times to seeke for inchantments, but hee set his face toward the wildernesse.1

2And Balaam lift vp his eyes, and he saw Israel abiding in his tents, according to their Tribes: and the Spirit of God came vpon him.

3And he tooke vp his parable, and said, Balaam the sonne of Beor hath said, and the man whose eyes are open hath said:3

4Hee hath said, which heard the words of God, which saw the vision of the Almightie, falling into a trance, but hauing his eyes open:

5How goodly are thy tents, O Iacob, and thy Tabernacles, O Israel!

6As the valleyes are they spread forth, as gardens by the riuer side, as the trees of Lign-Aloes which the Lord hath planted, and as Cedar trees beside the waters.

8God brought him forth out of Egypt, he hath as it were the strength of an Unicorne: he shall eate vp the nations his enemies, and shall breake their bones, and pierce them thorow with his arrowes.8

9Hee couched, he lay downe as a Lyon, and as a great Lyon: who shal stirre him vp? Blessed is hee that blesseth thee, and cursed is hee that curseth thee.9

10¶ And Balaks anger was kindled against Balaam, and hee smote his hands together: and Balak said vnto Balaam, I called thee to curse mine enemies, and behold, thou hast altogether blessed them these three times.

11Therefore now, flee thou to thy place: I thought to promote thee vnto great honour, but loe, the Lord hath kept thee backe from honour.

12And Balaam said vnto Balak, Spake I not also to thy messengers which thou sentest vnto me, saying,

13If Balak would give mee his house full of siluer and gold, I cannot goe beyond the commandement of the Lord, to doe either good or bad of mine owne mind? But what the Lord saith, that will I speake.

14And now beholde, I goe vnto my people: come therefore, and I will aduertise thee, what this people shall doe to thy people in the latter dayes.

15¶ And hee tooke vp his parable, and said, Balaam the sonne of Beor hath said, and the man whose eyes are open, hath said:

16He hath said which heard the words of God, and knewe the knowledge of the most High, which sawe the vision of the Almightie, falling into a trance, but hauing his eyes open.

17I shall see him, but not now: I shall behold him, but not nigh: There shall come a starre out of Iacob, and a Scepter shall rise out of Israel, and shall smite the corners of Moab, and destroy all the children of Sheth.17

18And Edom shall bee a possession, Seir also shall be a possession for his enemies, and Israel shall doe valiantly.

19Out of Iacob shall come he that shall haue dominion, and shall destroy him that remaineth of the citie.

20¶ And when he looked on Amalek, he tooke vp his parable, and sayd, Amalek was the first of the nations, but his latter end shall bee, that hee perish for euer.20

21And hee looked on the Kenites, and tooke vp his parable, and saide, Strong is thy dwelling place, and thou puttest thy nest in a rocke:

22Neuerthelesse, the Kenite shall be wasted, vntil Asshur shal carie thee away captiue.22

23And he tooke vp his parable, and said, Alas! who shall liue when God doeth this?

24And shippes shall come from the coast of Chittim, and shal afflict Asshur, and shall afflict Eber, and hee also shall perish for euer.

25And Balaam rose vp, and went and returned to his place: and Balak also went his way.