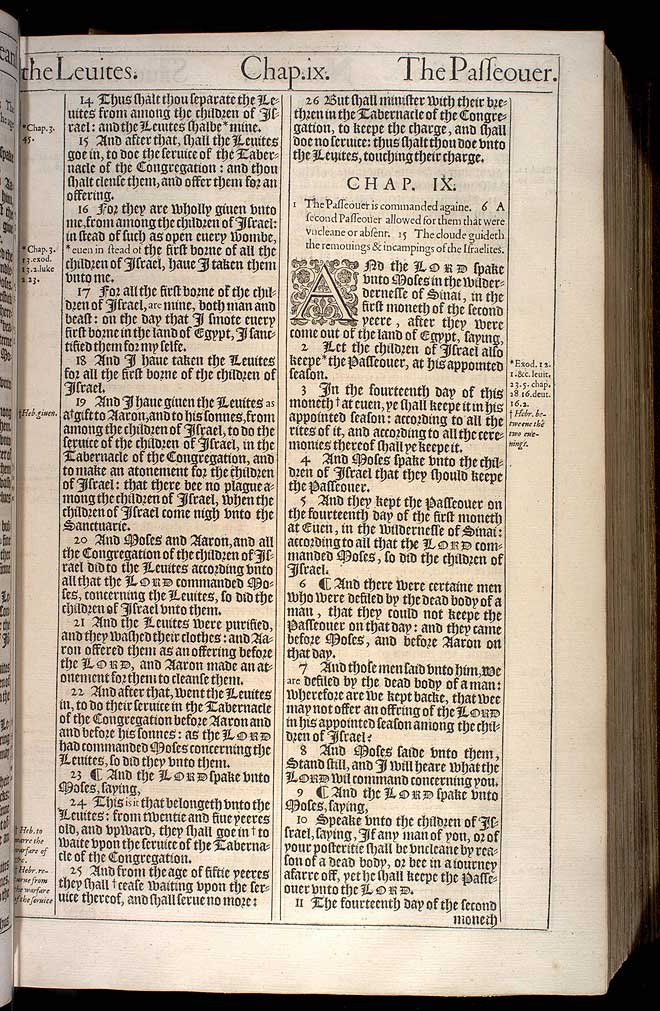 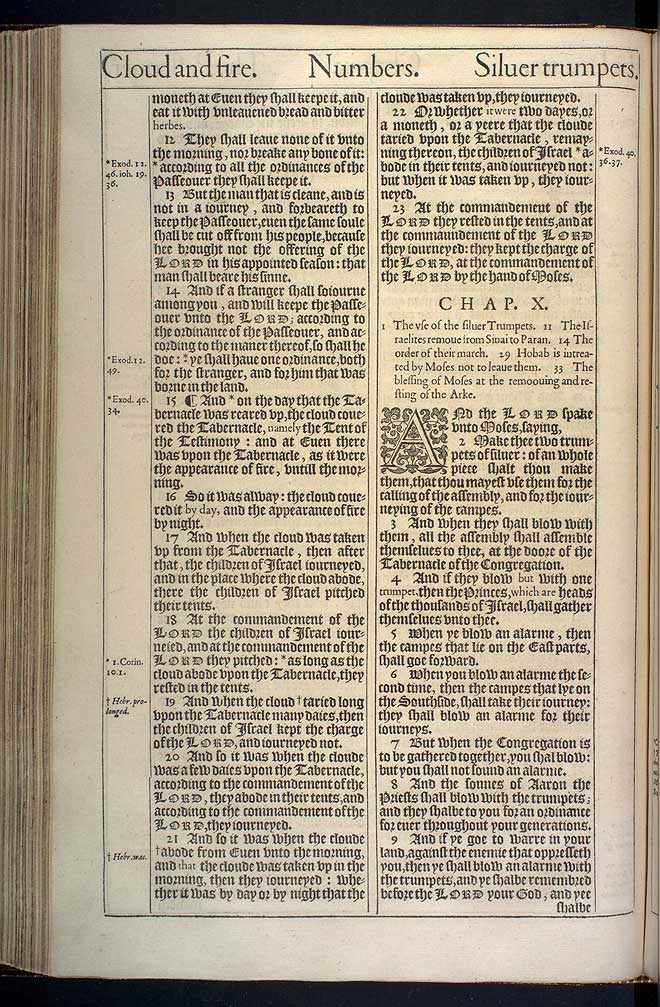 View this Numbers chapter 9 scan at a larger size

1 The Passeouer is commanded againe. 6 A second Passeouer allowed for them that were vncleane or absent. 15 The cloude guideth the remouings & incampings of the Israelites.

1 And the Lord spake vnto Moses in the wildernesse of Sinai, in the first moneth of the second yeere; after they were come out of the land of Egypt, saying,

2 Let the children of Israel also keepe the Passeouer, at his appointed season.2

4 And Moses spake vnto the children of Israel that they should keepe the Passeouer.

5 And they kept the Passeouer on the fourteenth day of the first moneth at Euen, in the wildernesse of Sinai: according to all that the Lord commanded Moses, so did the children of Israel.

6 ¶ And there were certaine men who were defiled by the dead body of a man, that they could not keepe the Passeouer on that day: and they came before Moses, and before Aaron on that day.

7 And those men said vnto him, We are defiled by the dead body of a man: wherefore are we kept backe, that wee may not offer an offring of the Lord in his appointed season among the children of Israel?

8 And Moses saide vnto them, Stand still, and I will heare what the Lord wil command concerning you.

10 Speake vnto the children of Israel, saying, If any man of you, or of your posteritie shall be vncleane by reason of a dead body, or bee in a iourney afarre off, yet he shall keepe the Passeouer vnto the Lord.

11 The fourteenth day of the second moneth at Euen they shall keepe it, and eat it with vnleauened bread and bitter herbes.

12 They shall leaue none of it vnto the morning, nor breake any bone of it: according to all the ordinances of the Passeouer they shall keepe it.12

13 But the man that is cleane, and is not in a iourney, and forbeareth to keep the Passeouer, euen the same soule shall be cut off from his people, because hee brought not the offering of the Lord in his appointed season: that man shall beare his sinne.

16 So it was always: the cloud couered it by day, and the appearance of fire by night.

19 And when the cloud taried long vpon the Tabernacle many daies, then the children of Israel kept the charge of the Lord, and iourneyed not.19

22 Or whether it were two dayes, or a moneth, or a yeere that the cloude taried vpon the Tabernacle, remayning thereon, the children of Israel abode in their tents, and iourneyed not: but when it was taken vp, they iourneyed.22