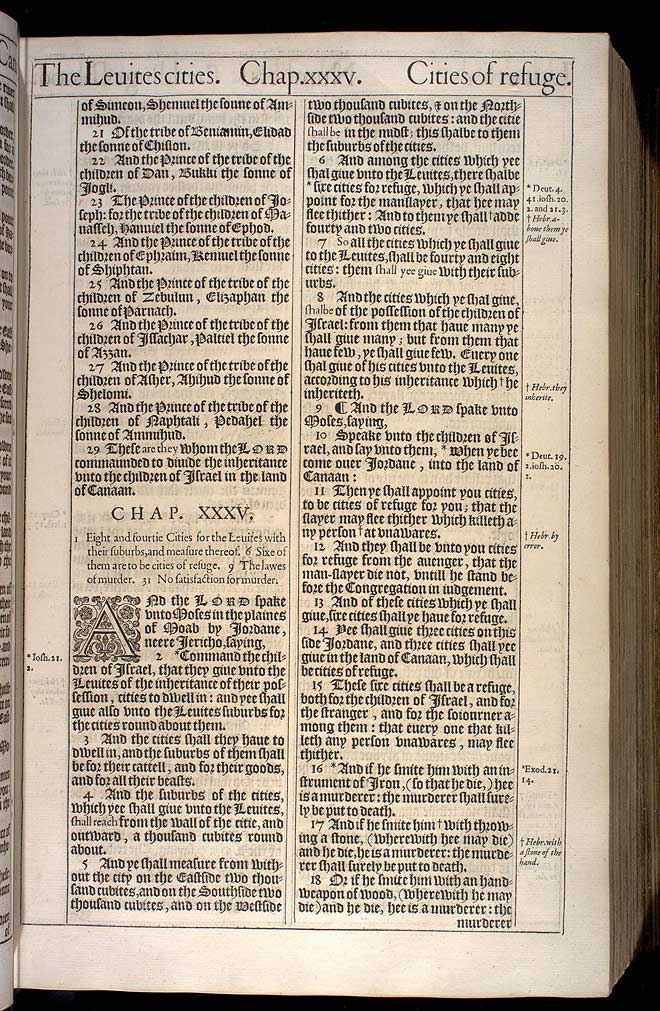 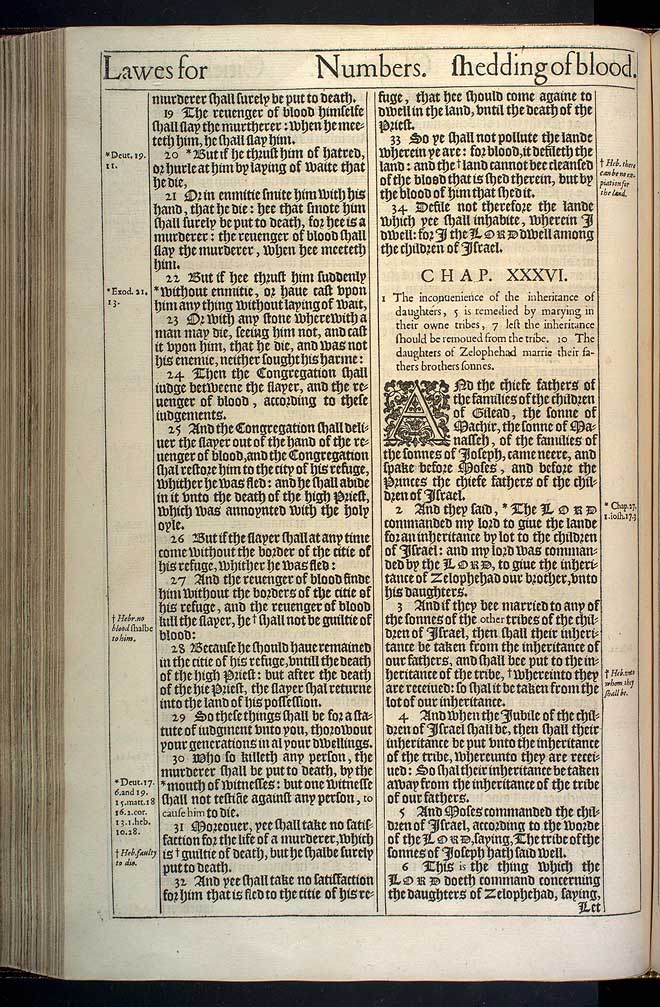 View this Numbers chapter 35 scan at a larger size

1 Eight and fourtie Cities for the Leuites with their suburbs, and measure thereof. 6 Sixe of them are to be cities of refuge. 9 The lawes of murder. 31 No satisfaction for murder.

1 And the Lord spake vnto Moses in the plaines of Moab by Iordane, neere Iericho, saying,

2 Command the children of Israel, that they giue vnto the Leuites of the inheritance of their possession, cities to dwell in: and yee shall giue also vnto the Leuites suburbs for the cities round about them.2

3 And the cities shall they haue to dwell in, and the suburbs of them shall be for their cattell, and for their goods, and for all their beasts.

4 And the suburbs of the cities, which yee shall giue vnto the Leuites, shall reach from the wall of the citie, and outward, a thousand cubites round about.

6 And among the cities which yee shal giue vnto the Leuites, there shalbe sixe cities for refuge, which ye shall appoint for the manslayer, that hee may flee thither: And to them ye shall adde fourty and two cities.6

7 So all the cities which ye shall giue to the Leuites, shall be fourty and eight cities: them shall yee giue with their suburbs.

10 Speake vnto the children of Israel, and say vnto them, When ye bee come ouer Iordane, into the land of Canaan:10

11 Then ye shall appoint you cities, to be cities of refuge for you; that the slayer may flee thither which killeth any person at vnawares.11

12 And they shall be vnto you cities for refuge from the auenger, that the man-slayer die not, vntill he stand before the Congregation in iudgement.

13 And of these cities which ye shall giue, sixe cities shall ye haue for refuge.

14 Yee shall giue three cities on this side Iordane, and three cities shall yee giue in the land of Canaan, which shall be cities of refuge.

15 These sixe cities shall be a refuge, both for the children of Israel, and for the stranger, and for the soiourner among them: that euery one that killeth any person vnawares, may flee thither.

16 And if he smite him with an instrument of Iron, (so that he die,) hee is a murderer: the murderer shall surely be put to death.16

17 And if he smite him with throwing a stone, (wherewith hee may die) and he die, he is a murderer: the murderer shall surely be put to death.17

18 Or if he smite him with an handweapon of wood, (wherewith he may die) and he die, hee is a murderer: the murderer shall surely be put to death.

19 The reuenger of blood himselfe shall slay the murtherer: when he meeteth him, he shall slay him.

20 But if he thrust him of hatred, or hurle at him by laying of waite that he die,20

21 Or in enmitie smite him with his hand, that he die: hee that smote him shall surely be put to death, for hee is a murderer: the reuenger of blood shall slay the murderer, when hee meeteth him.

22 But if hee thrust him suddenly without enmitie, or haue cast vpon him any thing without laying of wait,22

23 Or with any stone wherewith a man may die, seeing him not, and cast it vpon him, that he die, and was not his enemie, neither sought his harme:

24 Then the Congregation shall iudge betweene the slayer, and the reuenger of blood, according to these iudgements.

26 But if the slayer shall at any time come without the border of the citie of his refuge, whither he was fled:

29 So these things shall be for a statute of iudgment vnto you, thorowout your generations in al your dwellings.

30 Who so killeth any person, the murderer shall be put to death, by the mouth of witnesses: but one witnesse shall not testifie against any person, to cause him to die.30

31 Moreouer, yee shall take no satisfaction for the life of a murderer, which is guiltie of death, but he shalbe surely put to death.31

32 And yee shall take no satisfaction for him that is fled to the citie of his refuge, that hee should come againe to dwell in the land, vntil the death of the Priest.

33 So ye shall not pollute the lande wherein ye are: for blood, it defileth the land: and the land cannot bee cleansed of the blood that is shed therein, but by the blood of him that shed it.33

34 Defile not therefore the lande which yee shall inhabite, wherein I dwell: for I the Lord dwell among the children of Israel.