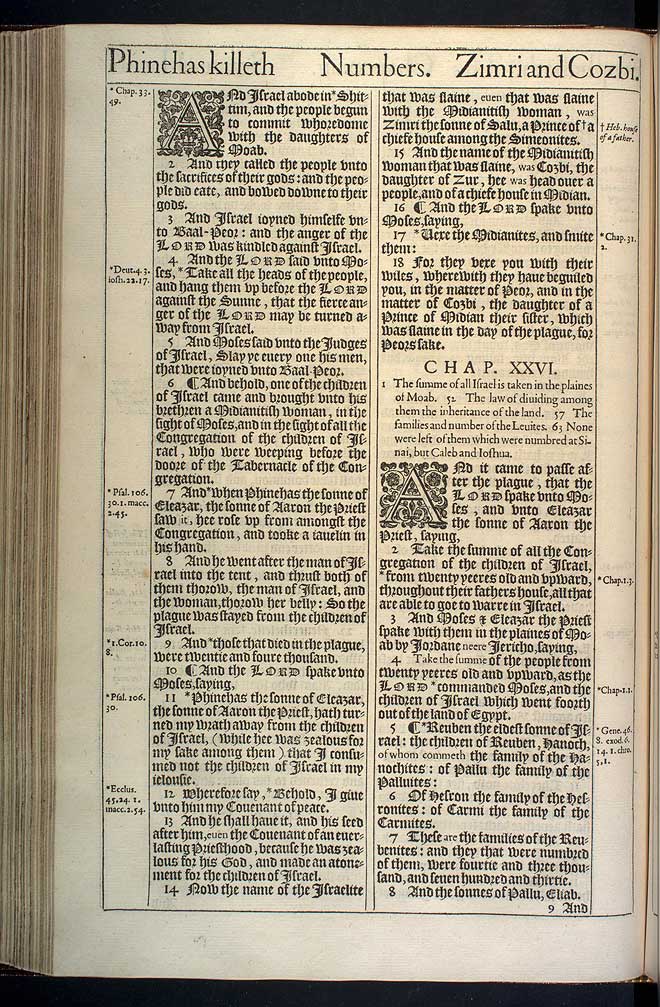 View this Numbers chapter 25 scan at a larger size

1 Israel at Shittim commit whoredome and Idolatrie. 6 Phinees killeth Zimri and Cozbi. 10 God therefore giueth him an euerlasting Priesthood. 16 The Midianites are to be vexed.

1 And Israel abode in Shittim, and the people begun to commit whoredome with the daughters of Moab.1

3 And Israel ioyned himselfe vnto Baal-Peor: and the anger of the Lord was kindled against Israel.

4 And the Lord said vnto Moses, Take all the heads of the people, and hang them vp before the Lord against the Sunne, that the fierce anger of the Lord may be turned away from Israel.4

5 And Moses said vnto the Iudges of Israel, Slay ye euery one his men, that were ioyned vnto Baal-Peor.

7 And when Phinehas the sonne of Eleazar, the sonne of Aaron the Priest saw it, hee rose vp from amongst the Congregation, and tooke a iauelin in his hand.7

9 And those that died in the plague, were twentie and foure thousand.9

12 Wherefore say, Behold, I giue vnto him my Couenant of peace.12

13 And he shall haue it, and his seed after him, euen the Couenant of an euerlasting Priesthood, because he was zealous for his God, and made an atonement for the children of Israel.

14 Now the name of the Israelite that was slaine, euen that was slaine with the Midianitish woman, was Zimri the sonne of Salu, a Prince of a chiefe house among the Simeonites.14

15 And the name of the Midianitish woman that was slaine, was Cozbi, the daughter of Zur, hee was head ouer a people, and of a chiefe house in Midian.

17 Uexe the Midianites, and smite them:17

18 For they vexe you with their wiles, wherewith they haue beguiled you, in the matter of Peor, and in the matter of Cozbi, the daughter of a Prince of Midian their sister, which was slaine in the day of the plague, for Peors sake.