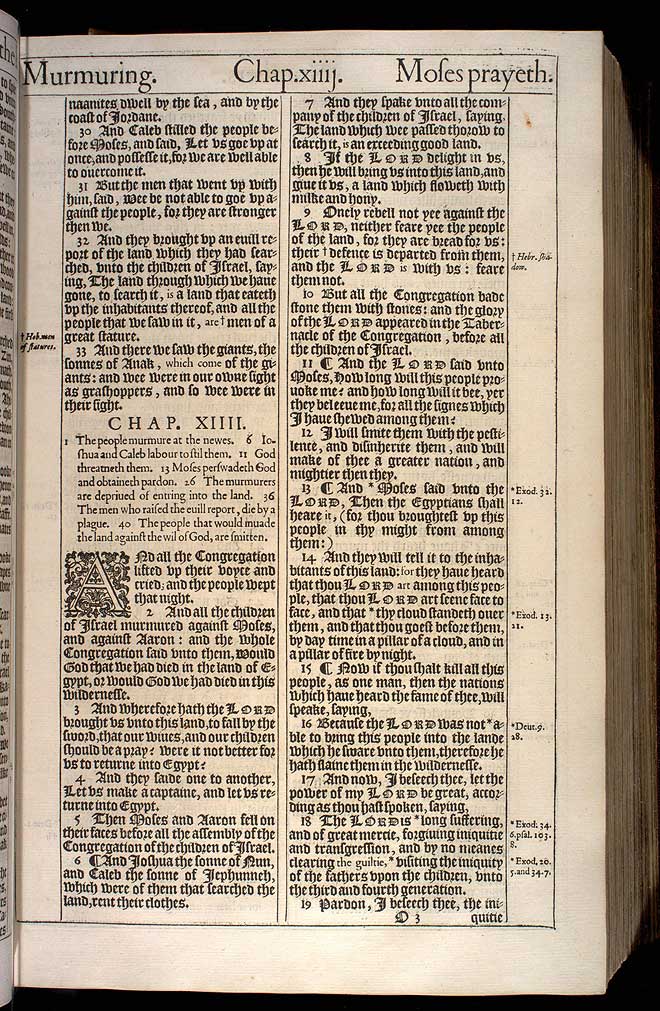 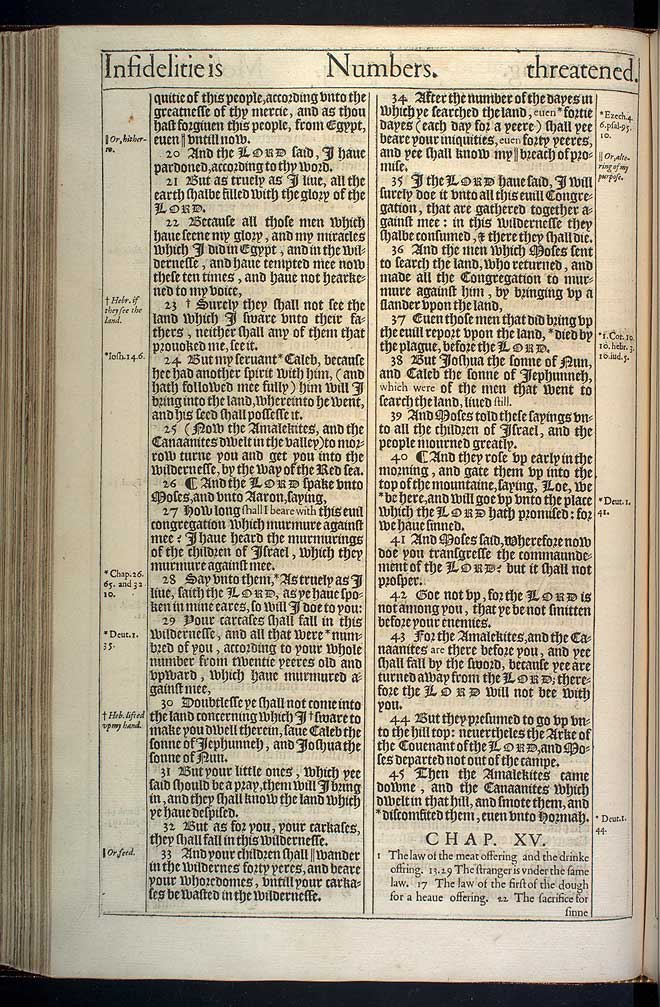 View this Numbers chapter 14 scan at a larger size

1 The people murmure at the newes. 6 Ioshua and Caleb labour to stil them. 11 God threatneth them. 13 Moses perswadeth God and obtaineth pardon. 26 The murmurers are depriued of entring into the land. 36 The men who raised the euill report, die by a plague. 40 The people that would inuade the land against the wil of God, are smitten.

1 And all the Congregation lifted vp their voyce and cried; and the people wept that night.

2 And all the children of Israel murmured against Moses, and against Aaron: and the whole Congregation said vnto them, Would God that we had died in the land of Egypt, or would God we had died in this wildernesse.

3 And wherefore hath the Lord brought vs vnto this land, to fall by the sword, that our wiues, and our children should be a pray? Were it not better for vs to returne into Egypt?

4 And they saide one to another, Let vs make a captaine, and let vs returne into Egypt.

5 Then Moses and Aaron fell on their faces before all the assembly of the Congregation of the children of Israel.

6 ¶ And Ioshua the sonne of Nun, and Caleb the sonne of Iephunneh, which were of them that searched the land, rent their clothes.

7 And they spake vnto all the company of the children of Israel, saying. The land which wee passed thorow to search it, is an exceeding good land.

8 If the Lord delight in vs, then he will bring vs into this land, and giue it vs, a land which floweth with milke and hony.

9 Onely rebell not yee against the Lord, neither feare yee the people of the land, for they are bread for vs: their defence is departed from them, and the Lord is with vs: feare them not.9

11 ¶ And the Lord said vnto Moses, How long will this people provoke me? and how long will it bee, yer they beleeue me, for all the signes which I haue shewed among them?

12 I will smite them with the pestilence, and disinherite them, and will make of thee a greater nation, and mightier then they.

13 ¶ And Moses said vnto the Lord, Then the Egyptians shall heare it, (for thou broughtest vp this people in thy might from among them:)13

15 ¶ Now if thou shalt kill all this people, as one man, then the nations which haue heard the fame of thee, will speake, saying,

16 Because the Lord was not able to bring this people into the lande which he sware vnto them, therefore he hath slaine them in the wildernesse.16

17 And now, I beseech thee, let the power of my Lord be great, according as thou hast spoken, saying,

18 The Lord is long suffering, and of great mercie, forgiuing iniquitie and transgression, and by no meanes clearing the guiltie, visiting the iniquity of the fathers vpon the chldren, vnto the third and fourth generation.18

19 Pardon, I beseech thee, the iniquitie of this people, according vnto the greatnesse of thy mercie, and as thou hast forgiuen this people, from Egypt, euen vntill now.19

20 And the Lord said, I haue pardoned, according to thy word.

21 But as truly as I liue, all the earth shalbe filled with the glory of the Lord.

22 Because all those men which haue seene my glory, and my miracles which I did in Egypt, and in the wildernesse, and haue tempted mee now these ten times, and haue not hearkened to my voice,

23 Surely they shall not see the land which I sware vnto their fathers, neither shall any of them that prouoked me, see it.23

24 But my seruant Caleb, because hee had another spirit with him, (and hath followed mee fully) him will I bring into the land, whereinto he went, and his seed shall possesse it.24

25 (Now the Amalekites, and the Canaanites dwelt in the valley) to morrow turne you and get you into the wildernesse, by the way of the Red sea.

28 Say vnto them, As truly as I liue, saith the Lord, as ye haue spoken in mine eares, so will I doe to you:28

29 Your carcases shall fall in this wildernesse, and all that were numbred of you, according to your whole number from twentie yeeres old and vpward, which haue murmured against mee,29

30 Doubtlesse ye shall not come into the land concerning which I sware to make you dwell therein, saue Caleb the sonne of Iephunneh, and Ioshua the sonne of Nun.30

31 But your little ones, which yee said should be a pray, them will I bring in, and they shall know the land which ye haue despised.

32 But as for you, your carkases, they shall fall in this wildernesse.

34 After the number of the dayes in which ye searched the land, euen fortie dayes (each day for a yeere) shall yee beare your iniquities, euen forty yeeres, and yee shall know my breach of promise.34

35 I the Lord haue said, I will surely doe it vnto all this euill Congregation, that are gathered together against mee: in this wildernesse they shalbe consumed, & there they shall die.

36 And the men which Moses sent to search the land, who returned, and made all the Congregation to murmure against him, by bringing vp a slander vpon the land,

37 Euen those men that did bring vp the euill report vpon the land, died by the plague, before the Lord.37

38 But Ioshua the sonne of Nun, and Caleb the sonne of Iephunneh, which were of the men that went to search the land, liued still.

39 And Moses told these sayings vnto all the children of Israel, and the people mourned greatly.

40 ¶ And they rose vp early in the morning, and gate them vp into the top of the mountaine, saying, Loe, we be here, and will goe vp vnto the place which the Lord hath promised: for we haue sinned.40

41 And Moses said, Wherefore now doe you transgresse the commaundement of the Lord ? but it shall not prosper.

42 Goe not vp, for the Lord is not among you, that ye be not smitten before your enemies.

43 For the Amalekites, and the Canaanites are there before you, and yee shall fall by the sword, because yee are turned away from the Lord; therefore the Lord will not bee with you.

44 But they presumed to go vp vnto the hill top: neuertheles the Arke of the Couenant of the Lord, and Moses departed not out of the campe.

45 Then the Amalekites came downe, and the Canaanites which dwelt in that hill, and smote them, and discomfited them, euen vnto Hormah.45