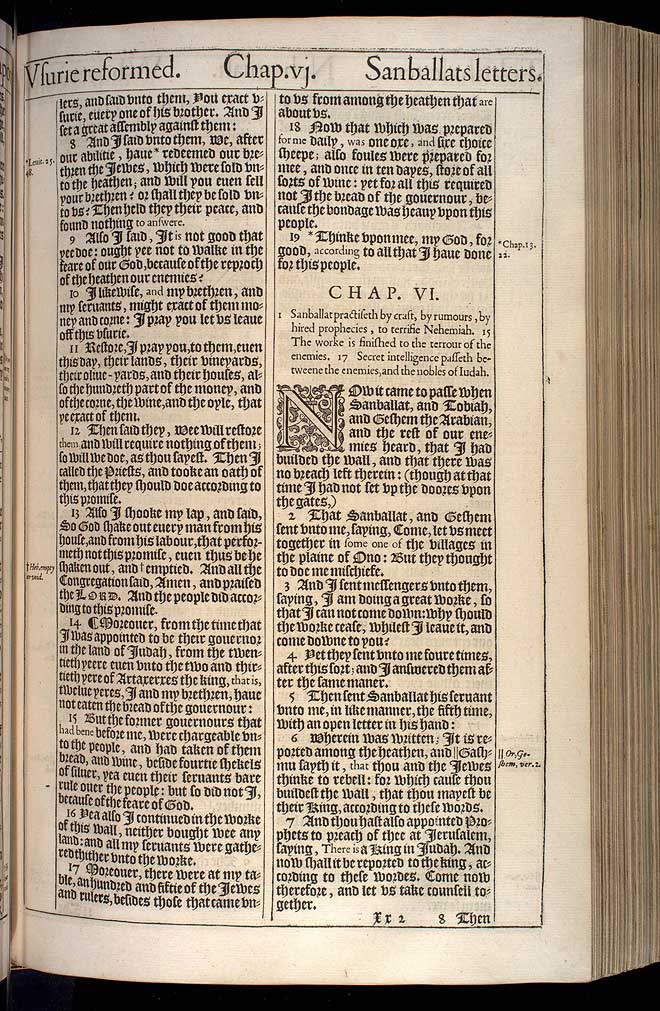 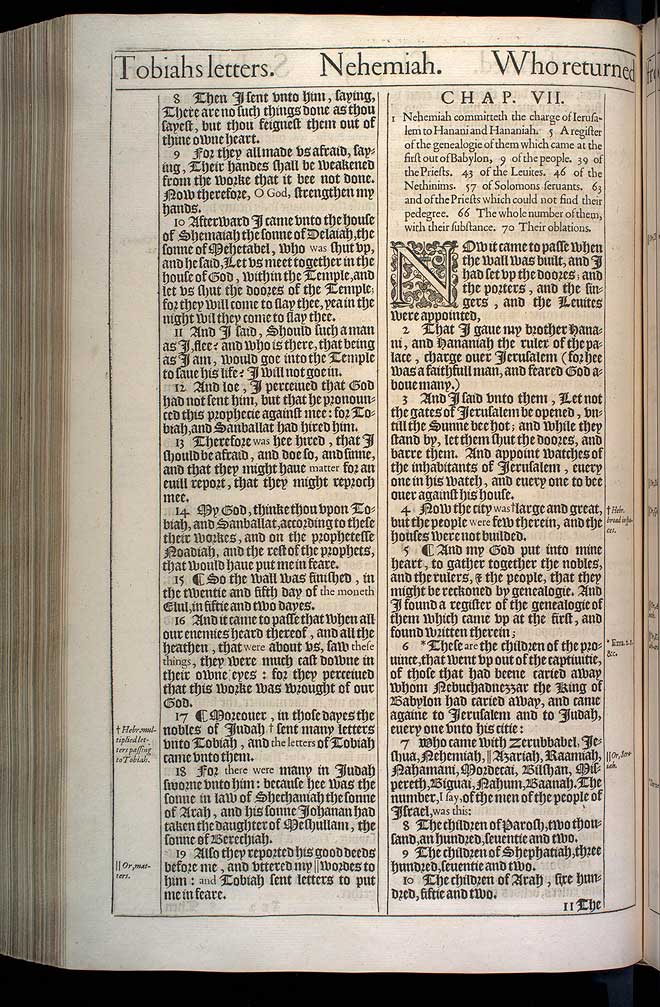 View this Nehemiah chapter 6 scan at a larger size

1 Sanballat practiseth by craft, by rumours, by hired prophecies, to terrifie Nehemiah. 15 The worke is finished to the terrour of the enemies. 17 Secret intelligence passeth betweene the enemies, and the nobles of Iudah.

1 Now it came to passe when Sanballat, and Tobiah, and Geshem the Arabian, and the rest of our enemies heard, that I had builded the wall, and that there was no breach left therein: (though at that time I had not set vp the doores vpon the gates,)

2 That Sanballat, and Geshem sent vnto me, saying, Come, let vs meet together in some one of the villages in the plaine of Ono: But they thought to doe me mischiefe.

3 And I sent messengers vnto them, saying, I am doing a great worke, so that I can not come down: why should the worke cease, whilest I leaue it, and come downe to you?

4 Yet they sent vnto me foure times, after this sort; and I answered them after the same maner.

5 Then sent Sanballat his seruant vnto me, in like manner, the fifth time, with an open letter in his hand:

6 Wherein was written; It is reported among the heathen, and Gashmu sayth it, that thou and the Iewes thinke to rebell: for which cause thou buildest the wall, that thou mayest be their King, according to these words.6

7 And thou hast also appointed Prophets to preach of thee at Ierusalem, saying, There is a King in Iudah. And now shall it be reported to the king, according to these wordes. Come now therefore, and let vs take counsell together.

8 Then I sent vnto him, saying, There are no such things done as thou sayest, but thou feignest them out of thine owne heart.

9 For they all made vs afraid, saying, Their handes shall be weakened from the worke that it bee not done. Now therefore, O God, strengthen my hands.

11 And I said, Should such a man as I, flee? and who is there, that being as I am, would goe into the Temple to saue his life? I will not goe in.

12 And loe, I perceiued that God had not sent him, but that he pronounced this prophecie against mee: for Tobiah, and Sanballat had hired him.

14 My God, thinke thou vpon Tobiah, and Sanballat, according to these their workes, and on the prophetesse Noadiah, and the rest of the prophets, that would haue put me in feare.

15 ¶ So the wall was finished, in the twentie and fifth day of the moneth Elul, in fiftie and two dayes.

16 And it came to passe that when all our enemies heard thereof, and all the heathen, that were about vs, saw these things, they were much cast downe in their owne eyes: for they perceiued that this worke was wrought of our God.

17 ¶ Moreouer, in those dayes the nobles of Iudah sent many letters vnto Tobiah, and the letters of Tobiah came vnto them.17

18 For there were many in Iudah sworne vnto him: because hee was the sonne in law of Shechaniah the sonne of Arah, and his sonne Iohanan had taken the daughter of Meshullam, the sonne of Berechiah.

19 Also they reported his good deeds before me, and vttered my wordes to him: and Tobiah sent letters to put me in feare.19