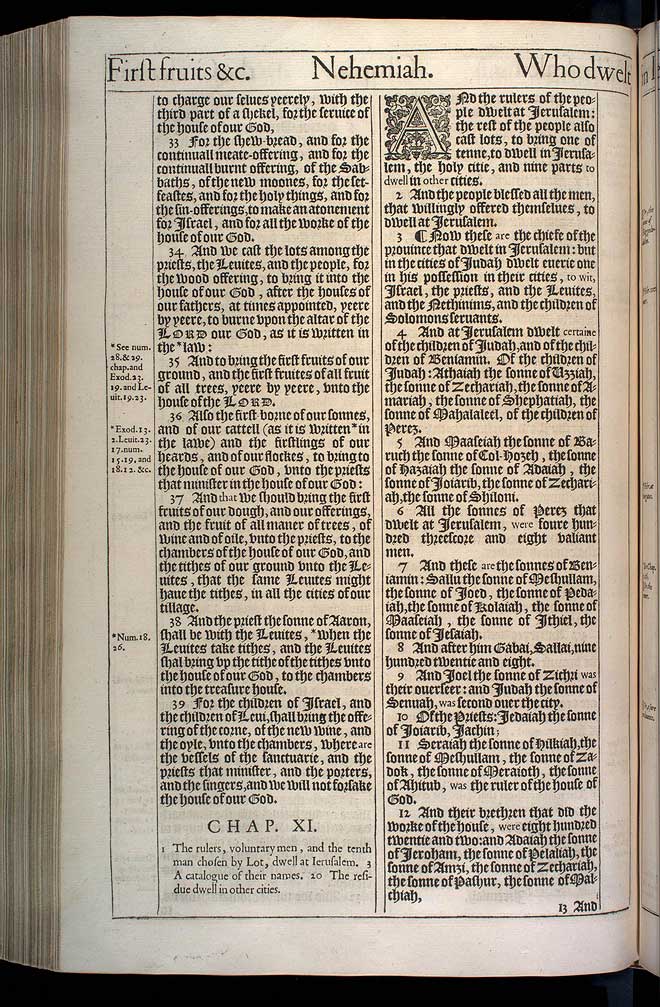 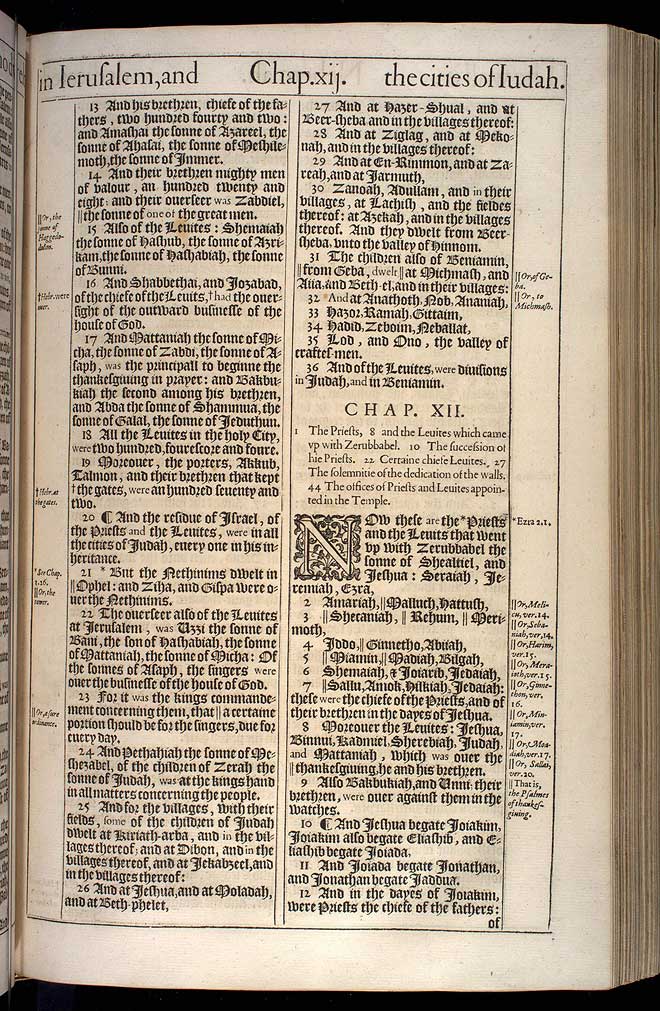 View this Nehemiah chapter 11 scan at a larger size

1 The rulers, voluntary men, and the tenth man chosen by Lot, dwell at Ierusalem. 3 A catalogue of their names. 20 The residue dwell in other cities.

2 And the people blessed all the men, that willingly offered themselues, to dwell at Ierusalem.

3 ¶ Now these are the chiefe of the prouince that dwelt in Ierusalem: but in the cities of Iudah dwelt euerie one in his possession in their cities, to wit, Israel, the priests, and the Leuites, and the Nethinims, and the children of Solomons seruants.

6 All the sonnes of Perez that dwelt at Ierusalem, were foure hundred threescore and eight valiant men.

8 And after him Gabai, Sallai, nine hundred twentie and eight.

14 And their brethren mighty men of valour, an hundred twenty and eight; and their ouerseer was Zaddiel, the sonne of one of the great men.14

16 And Shabbethai, and Iozabad, of the chiefe of the Leuits, had the ouersight of the outward businesse of the house of God.16

18 All the Leuites in the holy City, were two hundred, fourescore and foure.

19 Moreouer, the porters, Akkub, Talmon, and their brethren that kept the gates, were an hundred seuenty and two.19

20 ¶ And the residue of Israel, of the Priests and the Leuites, were in all the cities of Iudah, euery one in his inheritance.

23 For it was the kings commandement concerning them, that a certaine portion should be for the singers, due for euery day.23

27 And at Hazer-Shual, and at Beer-sheba and in the villages thereof:

28 And at Ziglag, and at Mekonah, and in the villages thereof:

30 Zanoah, Adullam, and in their villages, at Lachish, and the fieldes thereof: at Azekah, and in the villages thereof. And they dwelt from Beer-sheba, vnto the valley of Hinnom.

31 The children also of Beniamin, from Geba, dwelt at Michmash, and Aiia, and Beth-el, and in their villages:31

36 And of the Leuites, were diuisions in Iudah, and in Beniamin.