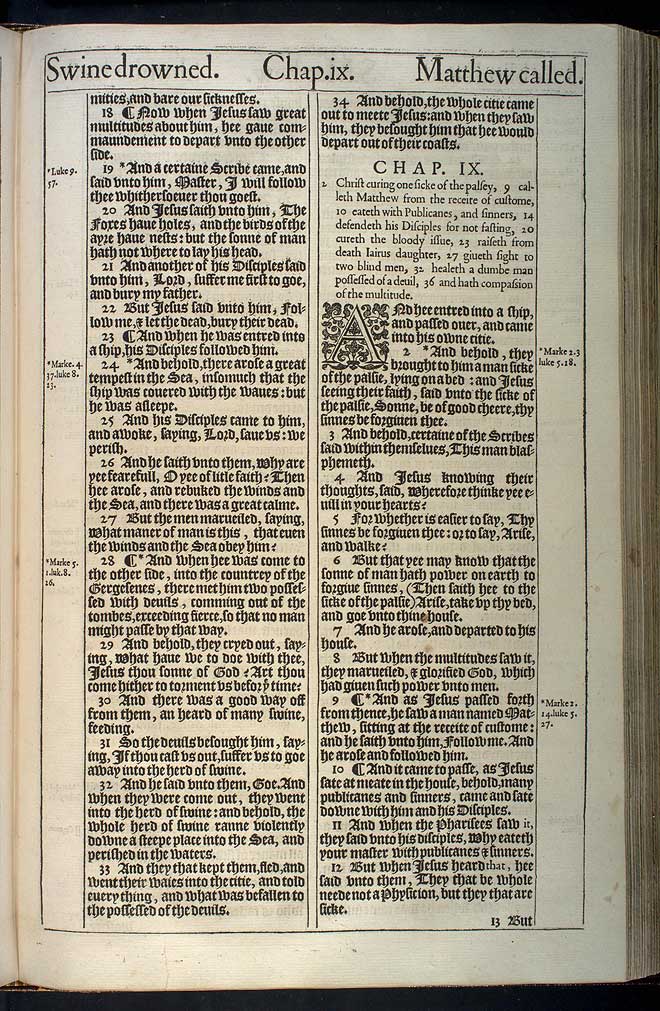 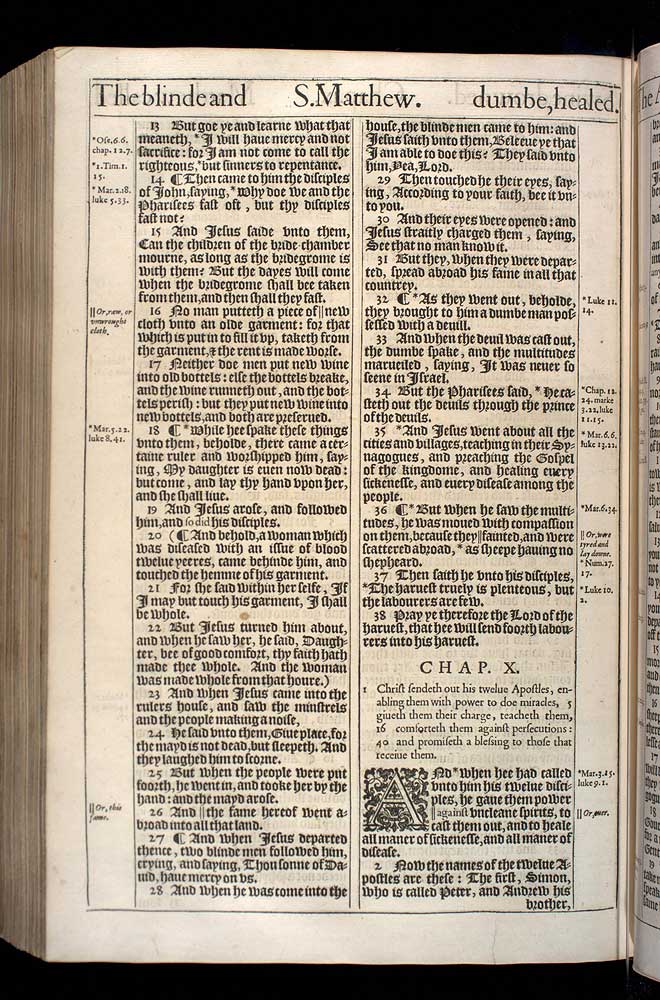 View this Matthew chapter 9 scan at a larger size

2 Christ curing one sicke of the palsey, 9 calleth Matthew from the receite of custome, 10 eateth with Publicanes, and sinners, 14 defendeth his Disciples for not fasting, 20 cureth the bloody issue, 23 raiseth from death Iairus daughter, 27 giueth sight to two blind men, 32 healeth a dumbe man possessed of a deuil, 36 and hath compassion of the multitude.

1 And hee entred into a ship, and passed ouer, and came into his owne citie.

3 And behold, certaine of the Scribes said within themselues, This man blasphemeth.

4 And Iesus knowing their thoughts, said, Wherefore thinke yee euill in your hearts?

5 For whether is easier to say, Thy sinnes be forgiuen thee: or to say, Arise, and walke?

6 But that yee may know that the sonne of man hath power on earth to forgiue sinnes, (Then saith hee to the sicke of the palsie) Arise, take vp thy bed, and goe vnto thine house.

7 And he arose, and departed to his house.

8 But when the multitudes saw it, they marueiled, & glorified God, which had giuen such power vnto men.

9 ¶ And as Iesus passed forth from thence, he saw a man named Matthew, sitting at the receite of custome: and he saith vnto him, Follow me. And he arose and followed him.9

10 ¶ And it came to passe, as Iesus sate at meate in the house, behold, many publicanes and sinners, came and sate downe with him and his Disciples.

11 And when the Pharisees saw it, they said vnto his disciples, Why eateth your master with publicanes & sinners.

12 But when Iesus heard that, hee said vnto them, They that be whole neede not a Physicion, but they that are sicke.

13 But goe ye and learne what that meaneth, I will haue mercy and not sacrifice: for I am not come to call the righteous, but sinners to repentance.13

14 ¶ Then came to him the disciples of Iohn, saying, Why doe we and the Pharisees fast oft, but thy disciples fast not?14

15 And Iesus saide vnto them, Can the children of the bride-chamber mourne, as long as the bridegrome is with them? But the dayes will come when the bridegrome shall bee taken from them, and then shall they fast.

16 No man putteth a piece of new cloth vnto an olde garment: for that which is put in to fill it vp, taketh from the garment, & the rent is made worse.16

18 ¶ While hee spake these things vnto them, beholde, there came a certaine ruler and worshipped him, saying, My daughter is euen now dead: but come, and lay thy hand vpon her, and she shall liue.18

19 And Iesus arose, and followed him, and so did his disciples.

20 (¶ And behold, a woman which was diseased with an issue of blood twelue yeeres, came behinde him, and touched the hemme of his garment.

21 For she said within her selfe, If I may but touch his garment, I shall be whole.

22 But Iesus turned him about, and when he saw her, he said, Daughter, bee of good comfort, thy faith hath made thee whole. And the woman was made whole from that houre.)

23 And when Iesus came into the rulers house, and saw the minstrels and the people making a noise,

24 He said vnto them, Giue place, for the mayd is not dead, but sleepeth. And they laughed him to scorne.

25 But when the people were put foorth, he went in, and tooke her by the hand: and the mayd arose.

26 And the fame hereof went abroad into all that land.26

27 ¶ And when Iesus departed thence, two blinde men followed him, crying, and saying, Thou sonne of Dauid, haue mercy on vs.

28 And when he was come into the house, the blinde men came to him: and Iesus saith vnto them, Beleeue ye that I am able to doe this? They said vnto him, Yea, Lord.

29 Then touched he their eyes, saying, According to your faith, bee it vnto you.

30 And their eyes were opened: and Iesus straitly charged them, saying, See that no man know it.

31 But they, when they were departed, spread abroad his fame in all that countrey.

32 ¶ As they went out, beholde, they brought to him a dumbe man possessed with a deuill.32

33 And when the deuil was cast out, the dumbe spake, and the multitudes marueiled, saying, It was neuer so seene in Israel.

34 But the Pharisees said, He casteth out the deuils through the prince of the deuils.34

35 And Iesus went about all the cities and villages, teaching in their Synagogues, and preaching the Gospel of the kingdome, and healing euery sickenesse, and euery disease among the people.35

36 ¶ But when he saw the multitudes, he was moued with compassion on them, because they fainted, and were scattered abroad, as sheepe hauing no shepheard.36

37 Then saith he vnto his disciples, The haruest truely is plenteous, but the labourers are few.37

38 Pray ye therefore the Lord of the haruest, that hee will send foorth labourers into his haruest.