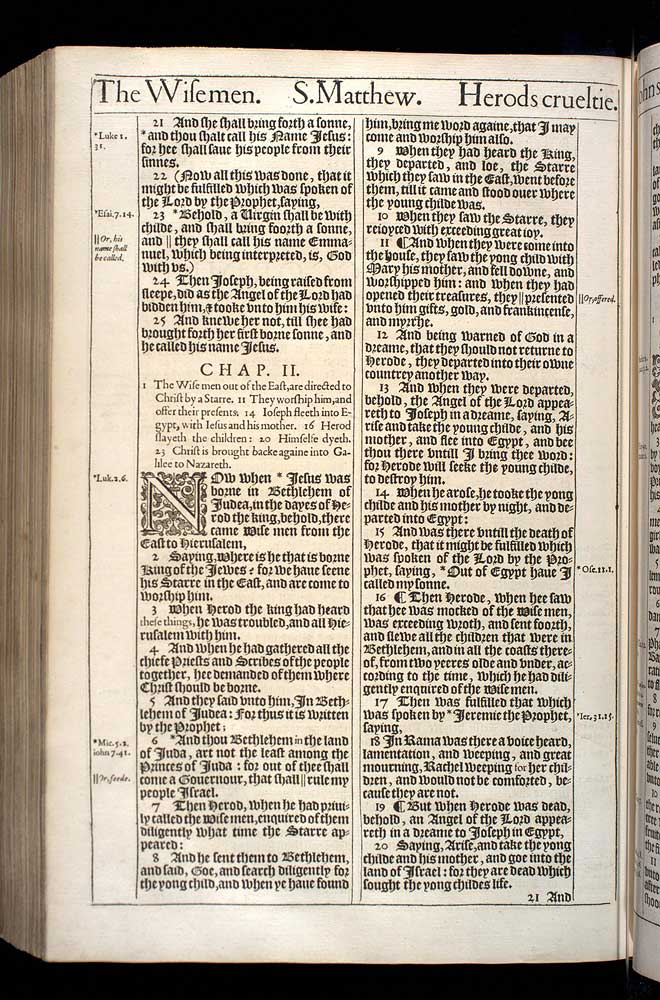 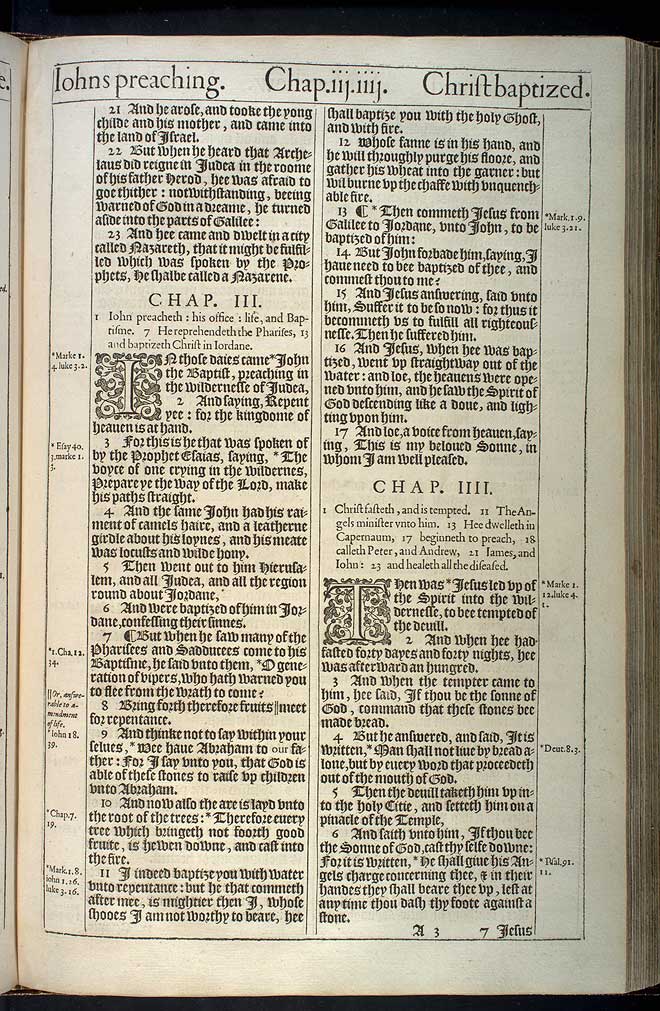 View this Matthew chapter 2 scan at a larger size

1 The Wise men out of the East, are directed to Christ by a Starre. 11 They worship him, and offer their presents. 14 Ioseph fleeth into Egypt, with Iesus and his mother. 16 Herod slayeth the children: 20 Himselfe dyeth. 23 Christ is brought backe againe into Galilee to Nazareth.

1 Now when Iesus was borne in Bethlehem of Iudea, in the dayes of Herod the king, behold, there came Wise men from the East to Hierusalem,1

2 Saying, Where is he that is borne King of the Iewes? for we haue seene his Starre in the East, and are come to worship him.

3 When Herod the king had heard these things, he was troubled, and all Hierusalem with him.

4 And when he had gathered all the chiefe Priests and Scribes of the people together, hee demanded of them where Christ should be borne.

5 And they said vnto him, In Bethlehem of Iudea: For thus it is written by the Prophet;

6 And thou Bethlehem in the land of Iuda, art not the least among the Princes of Iuda: for out of thee shall come a Gouernour, that shall rule my people Israel.6

7 Then Herod, when he had priuily called the Wise men, enquired of them diligently what time the Starre appeared:

8 And he sent them to Bethlehem, and said, Goe, and search diligently for the yong child, and when ye haue found him, bring me word againe, that I may come and worship him also.

9 When they had heard the King, they departed, and loe, the Starre which they saw in the East, went before them, till it came and stood ouer where the young childe was.

10 When they saw the Starre, they reioyced with exceeding great ioy.

11 ¶ And when they were come into the house, they saw the yong child with Mary his mother, and fell downe, and worshipped him: and when they had opened their treasures, they presented vnto him gifts, gold, and frankincense, and myrrhe.11

12 And being warned of God in a dreame, that they should not returne to Herode, they departed into their owne countrey another way.

13 And when they were departed, behold, the Angel of the Lord appeareth to Ioseph in a dreame, saying, Arise and take the young childe, and his mother, and flee into Egypt, and bee thou there vntill I bring thee word: for Herode will seeke the young childe, to destroy him.

14 When he arose, he tooke the yong childe and his mother by night, and departed into Egypt:

15 And was there vntill the death of Herode, that it might be fulfilled which was spoken of the Lord by the Prophet, saying, Out of Egypt haue I called my sonne.15

16 ¶ Then Herode, when hee saw that hee was mocked of the Wise men, was exceeding wroth, and sent foorth, and slewe all the children that were in Bethlehem, and in all the coasts thereof, from two yeeres olde and vnder, according to the time, which he had diligently enquired of the Wise men.

17 Then was fulfilled that which was spoken by Ieremie the Prophet, saying,17

18 In Rama was there a voice heard, lamentation, and weeping, and great mourning, Rachel weeping for her children, and would not be comforted, because they are not.

19 ¶ But when Herode was dead, behold, an Angel of the Lord appeareth in a dreame to Ioseph in Egypt,

21 And he arose, and tooke the yong childe and his mother, and came into the land of Israel.

22 But when he heard that Archelaus did reigne in Iudea in the roome of his father Herod, hee was afraid to goe thither: notwithstanding, beeing warned of God in a dreame, he turned aside into the parts of Galilee:

23 And hee came and dwelt in a city called Nazareth, that it might be fulfilled which was spoken by the Prophets, He shalbe called a Nazarene.