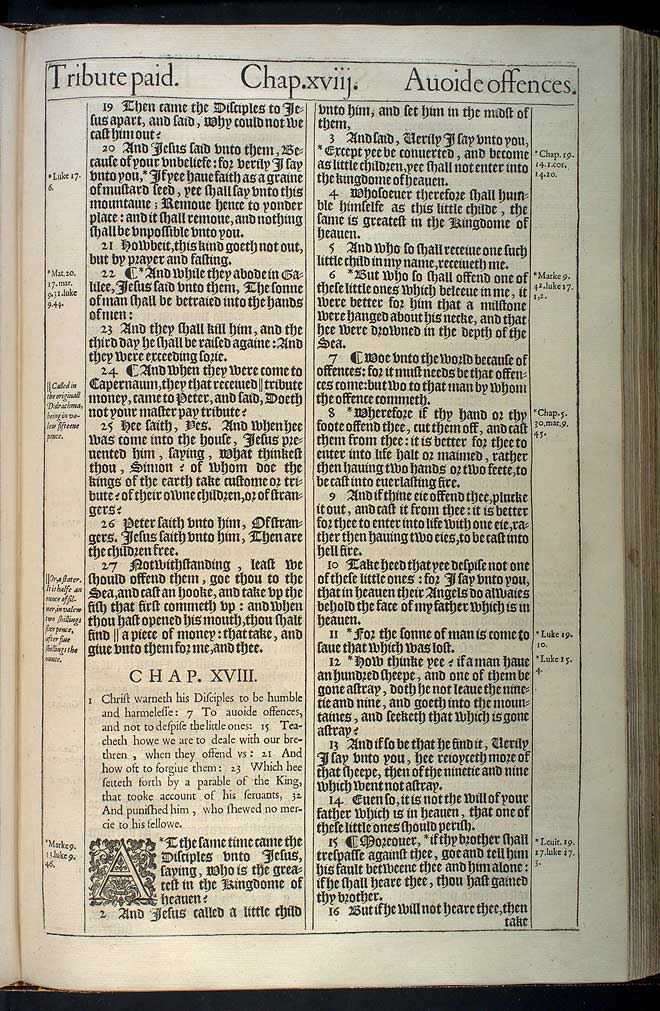 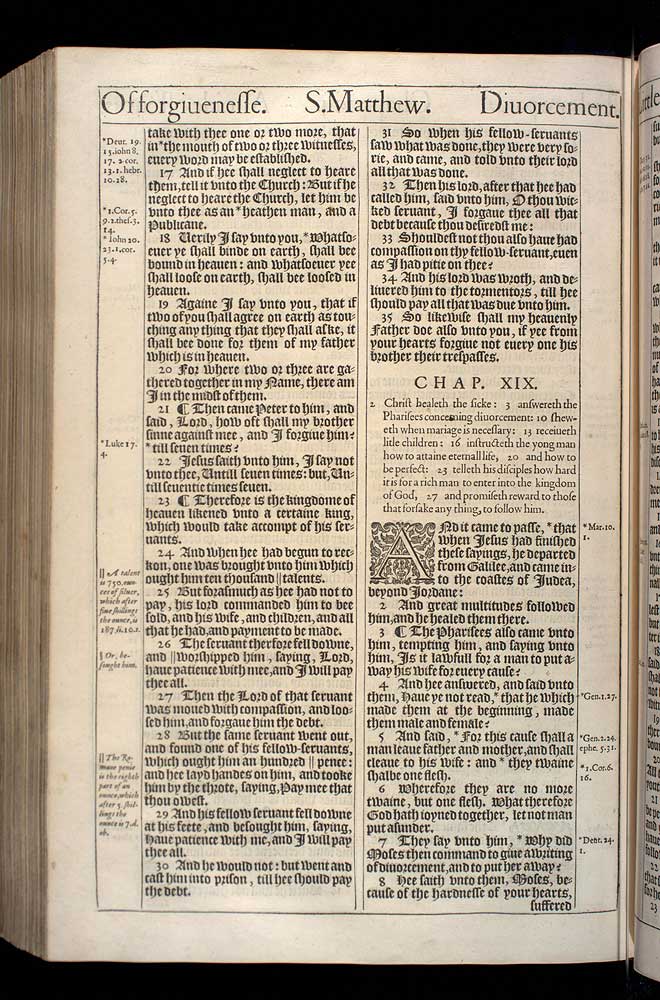 View this Matthew chapter 18 scan at a larger size

1 Christ warneth his Disciples to be humble and harmelesse: 7 To auoide offences, and not to despise the little ones: 15 Teacheth howe we are to deale with our brethren, when they offend vs: 21 And how oft to forgiue them: 23 Which hee setteth forth by a parable of the King, that tooke account of his seruants, 32 And punished him, who shewed no mercie to his fellowe.

1 At the same time came the Disciples vnto Iesus, saying, Who is the greatest in the Kingdome of heauen?1

2 And Iesus called a little child vnto him, and set him in the midst of them,

3 And said, Uerily I say vnto you, Except yee be conuerted, and become as little children, yee shall not enter into the kingdome of heauen.3

4 Whosoeuer therefore shall humble himselfe as this little childe, the same is greatest in the Kingdome of heauen.

5 And who so shall receiue one such little child in my name, receiueth me.

6 But who so shall offend one of these little ones which beleeue in me, it were better for him that a milstone were hanged about his necke, and that hee were drowned in the depth of the Sea.6

7 ¶ Woe vnto the world because of offences: for it must needs be that offences come: but wo to that man by whom the offence commeth.

8 Wherefore if thy hand or thy foote offend thee, cut them off, and cast them from thee: it is better for thee to enter into life halt or maimed, rather then hauing two hands or two feete, to be cast into euerlasting fire.8

9 And if thine eie offend thee, plucke it out, and cast it from thee: it is better for thee to enter into life with one eie, rather then hauing two eies, to be cast into hell fire.

10 Take heed that yee despise not one of these little ones: for I say vnto you, that in heauen their Angels do alwaies behold the face of my father which is in heauen.

11 For the sonne of man is come to saue that which was lost.11

12 How thinke yee? if a man haue an hundred sheepe, and one of them be gone astray, doth he not leaue the ninetie and nine, and goeth into the mountaines, and seeketh that which is gone astray?12

13 And if so be that he find it, Uerily I say vnto you, hee reioyceth more of that sheepe, then of the ninetie and nine which went not astray.

14 Euen so, it is not the will of your father which is in heauen, that one of these little ones should perish.

15 ¶ Moreouer, if thy brother shall trespasse against thee, goe and tell him his fault betweene thee and him alone: if he shall heare thee, thou hast gained thy brother.15

16 But if he will not heare thee, then take with thee one or two more, that in the mouth of two or three witnesses, euery word may be established.16

19 Againe I say vnto you, that if two of you shall agree on earth as touching any thing that they shall aske, it shall bee done for them of my father which is in heauen.

20 For where two or three are gathered together in my Name, there am I in the midst of them.

21 ¶ Then came Peter to him, and said, Lord, how oft shall my brother sinne against mee, and I forgiue him? till seuen times?21

23 ¶ Therefore is the kingdome of heauen likened vnto a certaine king, which would take accompt of his seruants.

24 And when hee had begun to reckon, one was brought vnto him which ought him ten thousand talents.24

25 But forasmuch as hee had not to pay, his lord commanded him to bee sold, and his wife, and children, and all that he had, and payment to be made.

26 The seruant therfore fell downe, and worshipped him, saying, Lord, haue patience with mee, and I will pay thee all.26

27 Then the Lord of that seruant was moued with compassion, and loosed him, and forgaue him the debt.

28 But the same seruant went out, and found one of his fellow-seruants, which ought him an hundred pence: and hee layd handes on him, and tooke him by the throte, saying, Pay mee that thou owest.28

29 And his fellow seruant fell downe at his feete, and besought him, saying, Haue patience with me, and I will pay thee all.

30 And he would not: but went and cast him into prison, till hee should pay the debt.

31 So when his fellow-seruants saw what was done, they were very sorie, and came, and told vnto their lord all that was done.

32 Then his lord, after that hee had called him, said vnto him, O thou wicked seruant, I forgaue thee all that debt because thou desiredst me:

33 Shouldest not thou also haue had compassion on thy fellow-seruant, euen as I had pitie on thee?

34 And his lord was wroth, and deliuered him to the tormentors, till hee should pay all that was due vnto him.

35 So likewise shall my heauenly Father doe also vnto you, if yee from your hearts forgiue not euery one his brother their trespasses.