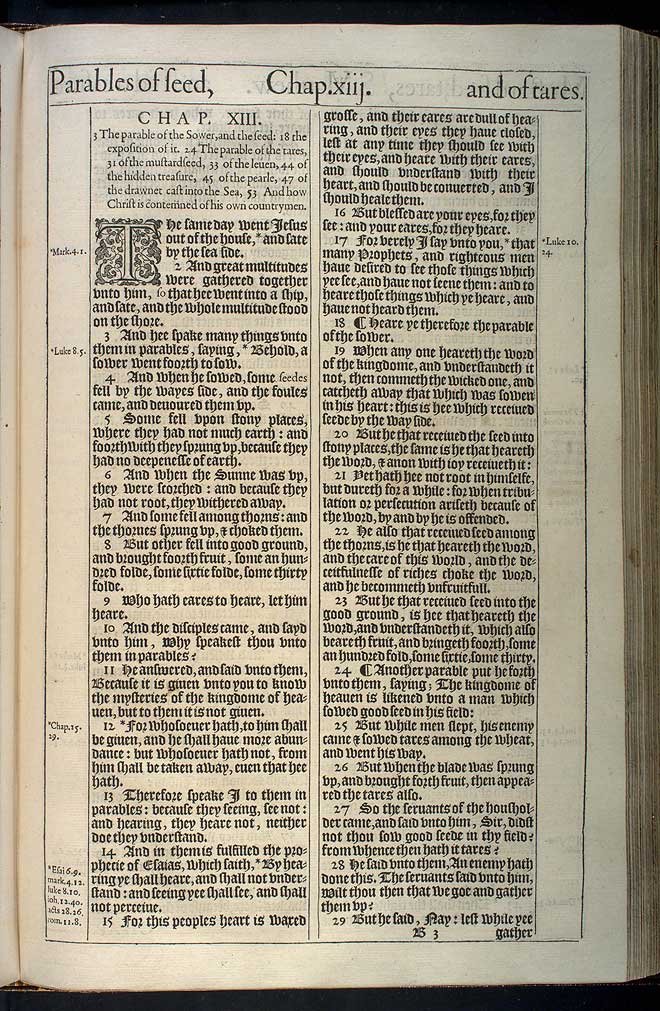 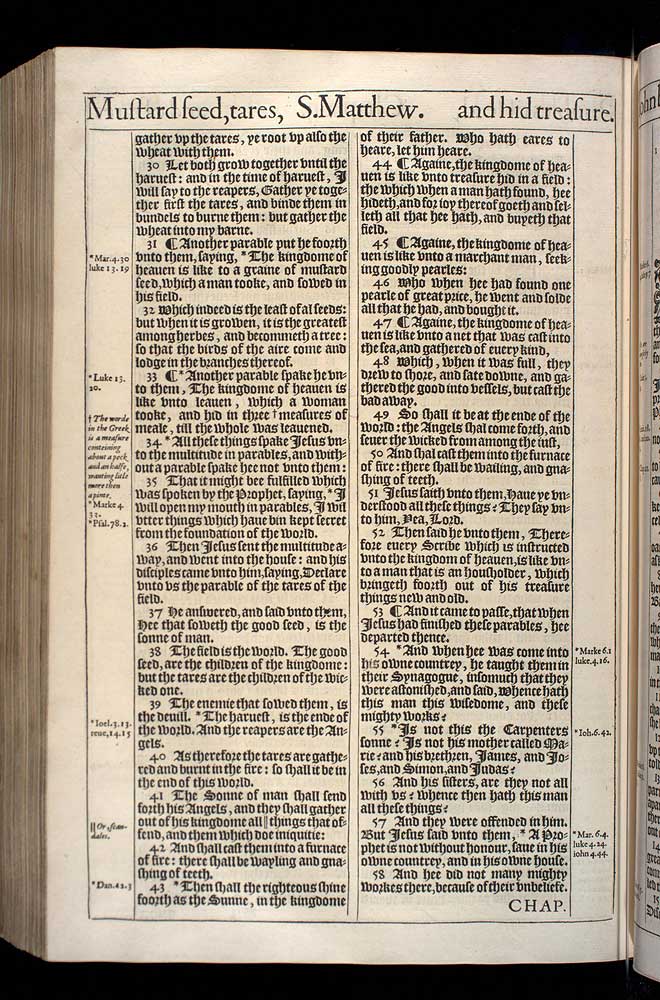 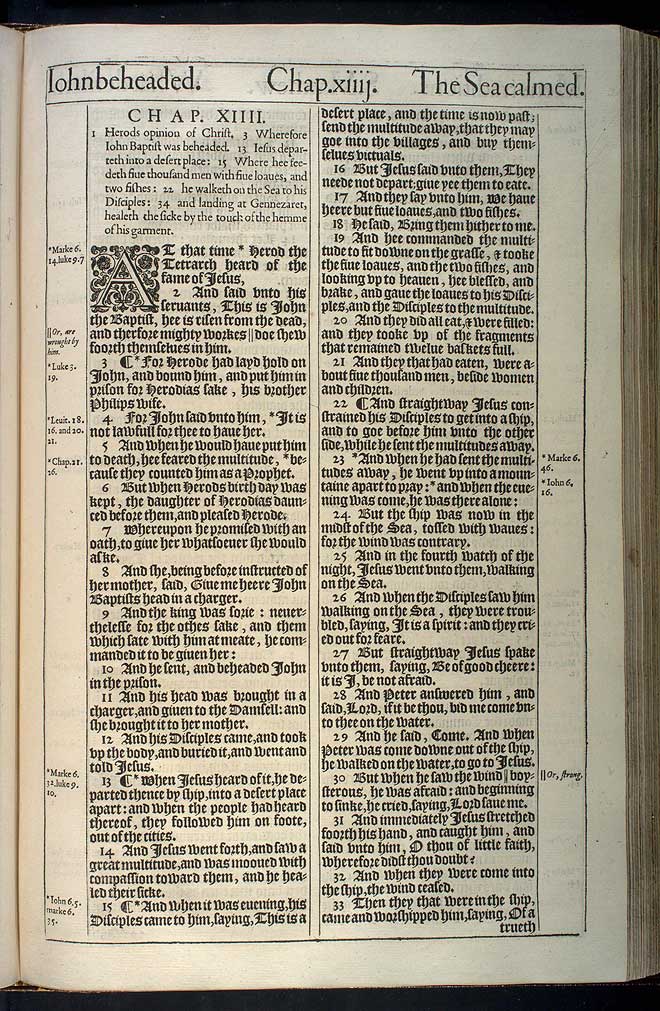 View this Matthew chapter 13 scan at a larger size

3 The parable of the Sower, and the seed: 18 the exposition of it. 24 The parable of the tares, 31 of the mustardseed, 33 of the leuen, 44 of the hidden treasure, 45 of the pearle, 47 of the drawnet cast into the Sea, 53 And how Christ is contemned of his own countrymen.

1 The same day went Iesus out of the house, and sate by the sea side.1

2 And great multitudes were gathered together vnto him, so that hee went into a ship, and sate, and the whole multitude stood on the shore.

3 And hee spake many things vnto them in parables, saying, Behold, a sower went foorth to sow.3

4 And when he sowed, some seedes fell by the wayes side, and the foules came, and deuoured them vp.

5 Some fell vpon stony places, where they had not much earth: and foorth with they sprung vp, because they had no deepenesse of earth.

6 And when the Sunne was vp, they were scorched: and because they had not root, they withered away.

7 And some fell among thorns: and the thornes sprung vp, & choked them.

8 But other fell into good ground, and brought foorth fruit, some an hundred folde, some sixtie folde, some thirty folde.

9 Who hath eares to heare, let him heare.

10 And the disciples came, and sayd vnto him, Why speakest thou vnto them in parables?

11 He answered, and said vnto them, Because it is giuen vnto you to know the mysteries of the kingdome of heauen, but to them it is not giuen.

13 Therefore speake I to then in parables: because they seeing, see not: and hearing, they heare not, neither doe they vnderstand.

14 And in them is fulfilled the prophecie of Esaias, which saith, By hearing ye shall heare, and shall not vnderstand: and seeing yee shall see, and shall not perceiue.14

18 ¶ Heare ye therefore the parable of the sower.

19 When any one heareth the word of the kingdome, and vnderstandeth it not, then commeth the wicked one, and catcheth away that which was sowen in his heart: this is hee which receiued seede by the way side.

20 But he that receiued the seed into stony places, the same is he that heareth the word, & anon with ioy receiueth it:

21 Yet hath hee not root in himselfe, but dureth for a while: for when tribulation or persecution ariseth because of the word, by and by he is offended.

22 He also that receiued seed among the thorns, is he that heareth the word, and the care of this world, and the deceitfulnesse of riches choke the word, and he becommeth vnfruitfull.

23 But he that receiued seed into the good ground, is hee that heareth the word, and vnderstandeth it, which also beareth fruit, and bringeth foorth, some an hundred fold, some sixtie, some thirty.

24 ¶ Another parable put he forth vnto them, saying; The kingdome of heauen is likened vnto a man which sowed good seed in his field:

25 But while men slept, his enemy came & sowed tares among the wheat, and went his way.

26 But when the blade was sprung vp, and brought forth fruit, then appeared the tares also.

27 So the seruants of the housholder came, and said vnto him, Sir, didst not thou sow good seede in thy field? from whence then hath it tares?

28 He said vnto them, An enemy hath done this. The seruants said vnto him, Wilt thou then that we goe and gather them vp?

29 But he said, Nay: lest while yee gather vp the tares, ye root vp also the wheat with them.

30 Let both grow together vntil the haruest: and in the time of haruest, I will say to the reapers, Gather ye together first the tares, and binde them in bundels to burne them: but gather the wheat into my barne.

31 ¶ Another parable put he foorth vnto them, saying, The kingdome of heauen is like to a graine of mustard seed, which a man tooke, and sowed in his field.31

32 Which indeed is the least of al seeds: but when it is growen, it is the greatest among herbes, and becommeth a tree: so that the birds of the aire come and lodge in the branches thereof.

33 ¶ Another parable spake he vnto them, The kingdome of heauen is like vnto leauen, which a woman tooke, and hid in three measures of meale, till the whole was leauened.33

34 All these things spake Iesus vnto the multitude in parables, and without a parable spake hee not vnto them:34

35 That it might bee fulfilled which was spoken by the Prophet, saying, I will open my mouth in parables, I wil vtter things which haue bin kept secret from the foundation of the world.35

36 Then Iesus sent the multitude away, and went into the house: and his disciples came vnto him, saying, Declare vnto vs the parable of the tares of the field.

37 He answered, and said vnto them, Hee that soweth the good seed, is the sonne of man.

39 The enemie that sowed them, is the deuill. The haruest, is the ende of the world. And the reapers are the Angels.39

40 As therefore the tares are gathered and burnt in the fire: so shall it be in the end of this world.

41 The Sonne of man shall send forth his Angels, and they shall gather out of his kingdome all things that offend, and them which doe iniquitie:41

42 And shall cast them into a furnace of fire: there shall be wayling and gnashing of teeth.

43 Then shall the righteous shine foorth as the Sunne, in the kingdome of their father. Who hath eares to heare, let him heare.43

44 ¶ Againe, the kingdome of heauen is like vnto treasure hid in a field: the which when a man hath found, hee hideth, and for ioy thereof goeth and selleth all that hee hath, and buyeth that field.

45 ¶ Againe, the kingdome of heauen is like vnto a marchant man, seeking goodly pearles:

46 Who when hee had found one pearle of great price, he went and solde all that he had, and bought it.

47 ¶ Againe, the kingdome of heauen is like vnto a net that was cast into the sea, and gathered of euery kind,

48 Which, when it was full, they drew to shore, and sate downe, and gathered the good into vessels, but cast the bad away.

49 So shall it be at the ende of the world: the Angels shal come forth, and seuer the wicked from among the iust,

50 And shal cast them into the furnace of fire: there shall be wailing, and gnashing of teeth.

51 Iesus saith vnto them, Haue ye vnderstood all these things? They say vnto him, Yea, Lord.

52 Then said he vnto them, Therefore euery Scribe which is instructed vnto the kingdom of heauen, is like vnto a man that is an housholder, which bringeth foorth out of his treasure things new and old.

53 ¶ And it came to passe, that when Iesus had finished these parables, hee departed thence.

54 And when hee was come into his owne countrey, he taught them in their Synagogue, insomuch that they were astonished, and said, Whence hath this man this wisedome, and these mighty works?54

55 Is not this the Carpenters sonne? Is not his mother called Marie? and his brethren, Iames, and Ioses, and Simon, and Iudas?55

56 And his sisters, are they not all with vs? whence then hath this man all these things?

57 And they were offended in him. But Iesus said vnto them, A Prophet is not without honour, saue in his owne countrey, and in his owne house.57

58 And hee did not many mighty workes there, because of their vnbeliefe.