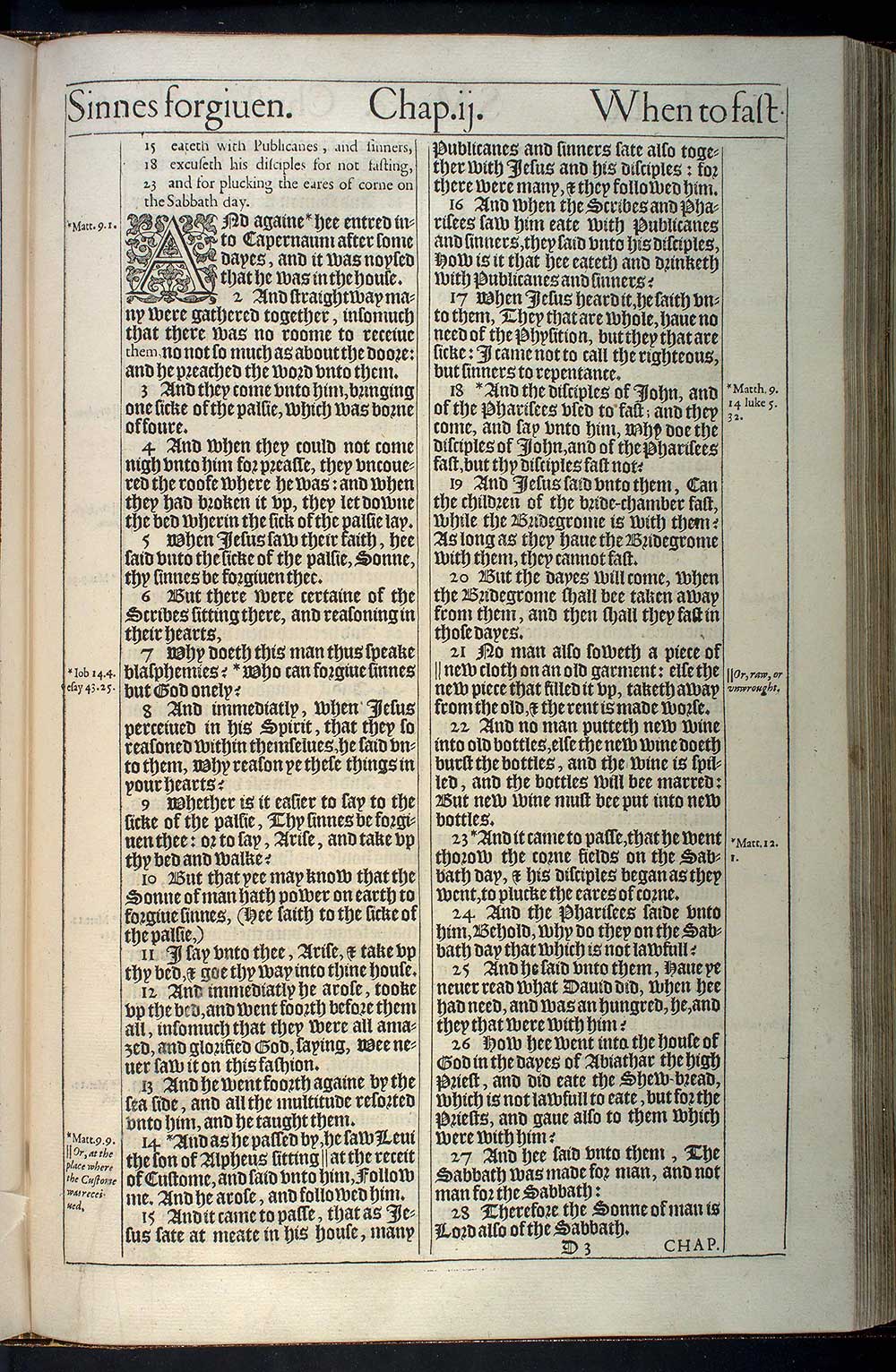 1 Christ healeth one sicke of the palsie, 14 calleth Matthew from the receit of Custome, 15 eateth with Publicanes, and sinners, 18 excuseth his disciples for not fasting, 23 and for plucking the eares of corne on the Sabbath day.

1And againe hee entred into Capernaum after some dayes, and it was noysed that he was in the house.1

2And straightway many were gathered together, insomuch that there was no roome to receiue them, no not so much as about the doore: and he preached the word vnto them.

3And they come vnto him, bringing one sicke of the palsie, which was borne of foure.

4And when they could not come nigh vnto him for preasse, they vncouered the roofe where he was: and when they had broken it vp, they let downe the bed wherin the sick of the palsie lay.

5When Iesus saw their faith, hee said vnto the sicke of the palsie, Sonne, thy sinnes be forgiuen thee.

6But there were certaine of the Scribes sitting there, and reasoning in their hearts,

7Why doeth this man thus speake blasphemies? Who can forgiue sinnes but God onely?7

8And immediatly, when Iesus perceiued in his Spirit, that they so reasoned within themselues, he said vnto them, Why reason ye these things in your hearts?

9Whether is it easier to say to the sicke of the palsie, Thy sinnes be forgiuen thee: or to say, Arise, and take vp thy bed and walke?

10But that yee may know that the Sonne of man hath power on earth to forgiue sinnes, (Hee saith to the sicke of the palsie,)

12And immediatly he arose, tooke vp the bed, and went foorth before them all, insomuch that they were all amazed, and glorified God, saying, Wee neuer saw it on this fashion.

13And he went foorth againe by the sea side, and all the multitude resorted vnto him, and he taught them.

14And as he passed by, he saw Leui the son of Alpheus sitting at the receit of Custome, and said vnto him, Follow me. And he arose, and followed him.14

15And it came to passe, that as Iesus sate at meate in his house, many Publicanes and sinners sate also together with Iesus and his disciples: for there were many, & they followed him.

17When Iesus heard it, he saith vnto them, They that are whole, haue no need of the Physition, but they that are sicke: I came not to call the righteous, but sinners to repentance.

20But the dayes will come, when the Bridegrome shall bee taken away from them, and then shall they fast in those dayes.

21No man also soweth a piece of new cloth on an old garment: else the new piece that filled it vp, taketh away from the old, & the rent is made worse.21

22And no man putteth new wine into old bottles, else the new wine doeth burst the bottles, and the wine is spilled, and the bottles will bee marred: But new wine must bee put into new bottles.

23And it came to passe, that he went thorow the corne fields on the Sabbath day, & his disciples began as they went, to plucke the eares of corne.23

24And the Pharisees saide vnto him, Behold, why do they on the Sabbath day that which is not lawfull?

25And he said vnto them, Haue ye neuer read what Dauid did, when hee had need, and was an hungred, he, and they that were with him?

26How hee went into the house of God in the dayes of Abiathar the high Priest, and did eate the Shew-bread, which is not lawfull to eate, but for the Priests, and gaue also to them which were with him?

27And hee said vnto them, The Sabbath was made for man, and not man for the Sabbath:

28Therefore the Sonne of man is Lord also of the Sabbath.