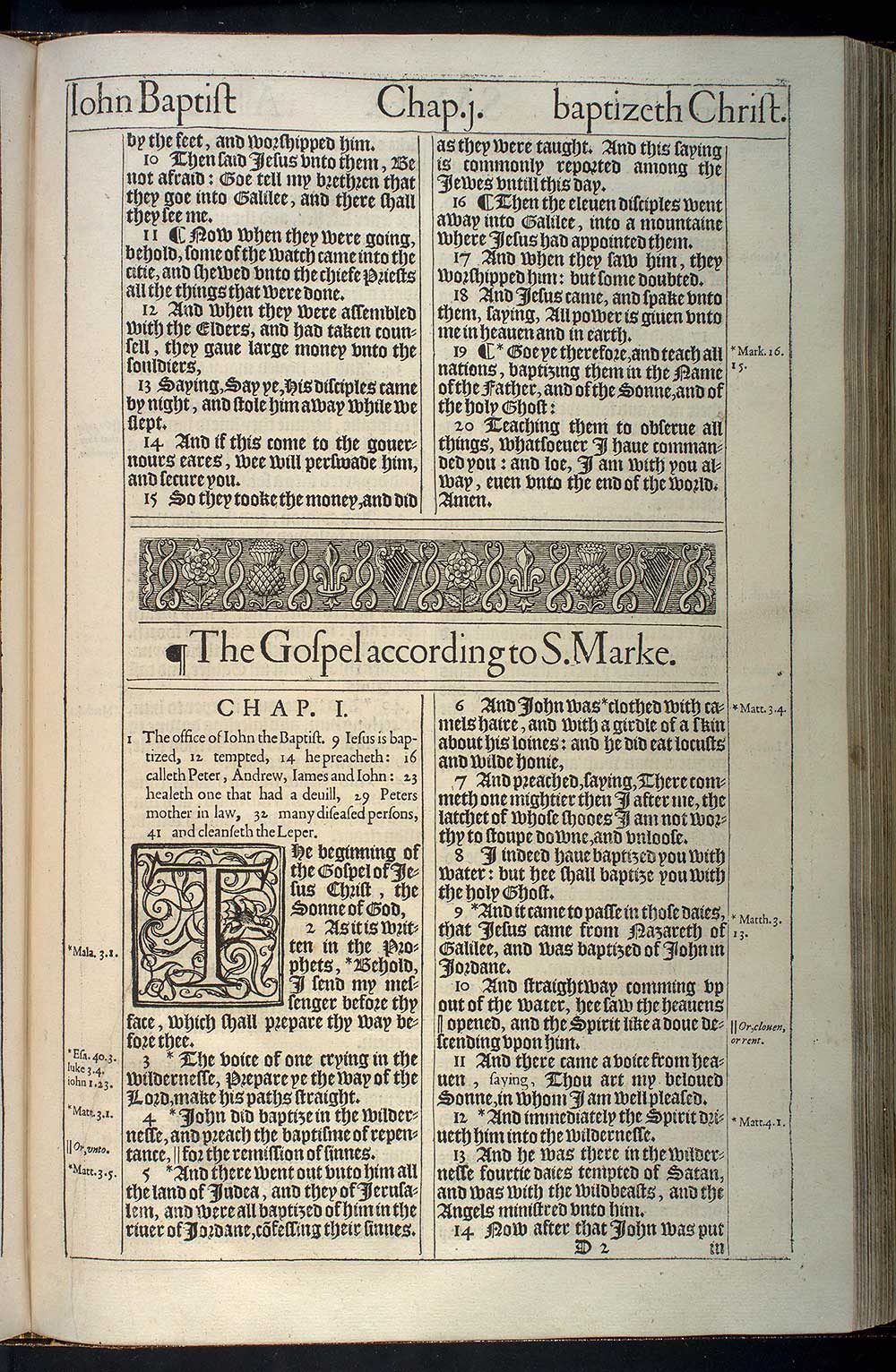 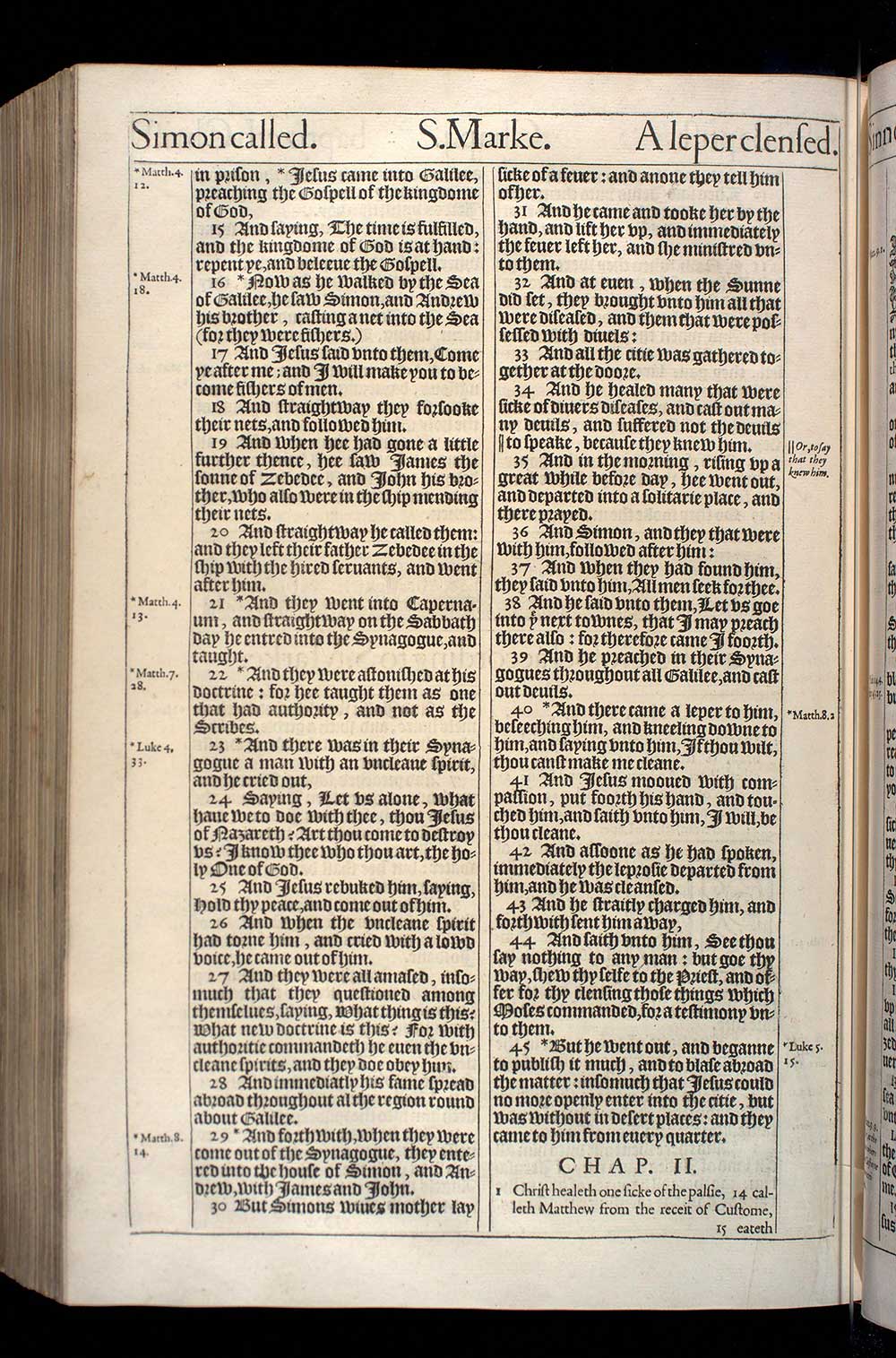 1 The office of Iohn the Baptist. 9 Iesus is baptized, 12 tempted, 14 he preacheth: 16 calleth Peter, Andrew, Iames and Iohn: 23 healeth one that had a deuill, 29 Peters mother in law, 32 many diseased persons, 41 and cleanseth the Leper.

1The beginning of the Gospel of Iesus Christ, the Sonne of God,

2As it is written in the Prophets, Behold, I send my messenger before thy face, which shall prepare thy way before thee.2

3The voice of one crying in the wildernesse, Prepare ye the way of the Lord, make his paths straight.3

4Iohn did baptize in the wildernesse, and preach the baptisme of repentance, for the remission of sinnes.4

5And there went out vnto him all the land of Iudea, and they of Ierusalem, and were all baptized of him in the riuer of Iordane, cōfessing their sinnes.5

6And Iohn was clothed with camels haire, and with a girdle of a skin about his loines: and he did eat locusts and wilde honie,6

7And preached, saying, There commeth one mightier then I after me, the latchet of whose shooes I am not worthy to stoupe downe, and vnloose.

8I indeed haue baptized you with water: but hee shall baptize you with the holy Ghost.

9And it came to passe in those daies, that Iesus came from Nazareth of Galilee, and was baptized of Iohn in Iordane.9

10And straightway comming vp out of the water, hee saw the heauens opened, and the Spirit like a doue descending vpon him.10

11And there came a voice from heauen, saying, Thou art my beloued Sonne, in whom I am well pleased.

12And immediately the Spirit driueth him into the wildernesse.12

13And he was there in the wildernesse fourtie daies tempted of Satan, and was with the wildbeasts, and the Angels ministred vnto him.

14Now after that Iohn was put in prison, Iesus came into Galilee, preaching the Gospell of the kingdome of God,14

15And saying, The time is fulfilled, and the kingdome of God is at hand: repent ye, and beleeue the Gospell.

16Now as he walked by the Sea of Galilee, he saw Simon, and Andrew his brother, casting a net into the Sea (for they were fishers.)16

17And Iesus said vnto them, Come ye after me; and I will make you to become fishers of men.

18And straightway they forsooke their nets, and followed him.

19And when hee had gone a little further thence, hee saw Iames the sonne of Zebedee, and Iohn his brother, who also were in the ship mending their nets.

20And straightway he called them: and they left their father Zebedee in the ship with the hired seruants, and went after him.

21And they went into Capernaum, and straightway on the Sabbath day he entred into the Synagogue, and taught.21

22And they were astonished at his doctrine: for hee taught them as one that had authority, and not as the Scribes.22

23And there was in their Synagogue a man with an vncleane spirit, and he cried out,23

24Saying, Let vs alone, what haue we to doe with thee, thou Iesus of Nazareth? Art thou come to destroy vs? I know thee who thou art, the holy One of God.

25And Iesus rebuked him, saying, Hold thy peace, and come out of him.

26And when the vncleane spirit had torne him, and cried with a lowd voice, he came out of him.

27And they were all amased, insomuch that they questioned among themselues, saying, What thing is this? What new doctrine is this? For with authoritie commandeth he euen the vncleane spirits, and they doe obey him.

28And immediatly his fame spread abroad throughout al the region round about Galilee.

29And forth with, when they were come out of the Synagogue, they entered into the house of Simon, and Andrew, with Iames and Iohn.29

30But Simons wiues mother lay sicke of a feuer: and anone they tell him of her.

31And he came and tooke her by the hand, and lift her vp, and immediately the feuer left her, and she ministred vnto them.

32And at euen, when the Sunne did set, they brought vnto him all that were diseased, and them that were possessed with diuels:

33And all the citie was gathered together at the doore.

34And he healed many that were sicke of diuers diseases, and cast out many deuils, and suffered not the deuils to speake, because they knew him.34

35And in the morning, rising vp a great while before day, hee went out, and departed into a solitarie place, and there prayed.

36And Simon, and they that were with him, followed after him:

37And when they had found him, they said vnto him, All men seek for thee.

38And he said vnto them, Let vs goe into þe next townes, that I may preach there also: for therefore came I foorth.

39And he preached in their Synagogues throughout all Galilee, and cast out deuils.

40And there came a leper to him, beseeching him, and kneeling downe to him, and saying vnto him, If thou wilt, thou canst make me cleane.40

41And Iesus mooued with compassion, put foorth his hand, and touched him, and saith vnto him, I will, be thou cleane.

42And assoone as he had spoken, immediately the leprosie departed from him, and he was cleansed.

43And he straitly charged him, and forth with sent him away,

44And saith vnto him, See thou say nothing to any man: but goe thy way, shew thy selfe to the Priest, and offer for thy clensing those things which Moses commanded, for a testimony vnto them.

45But he went out, and beganne to publish it much, and to blase abroad the matter: insomuch that Iesus could no more openly enter into the citie, but was without in desert places: and they came to him from euery quarter.45