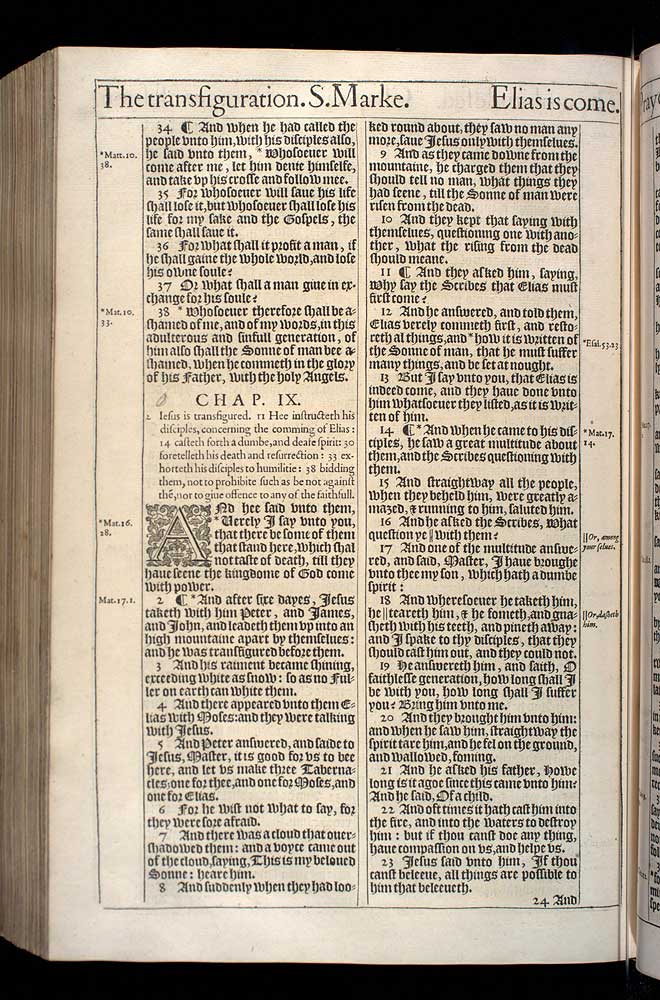 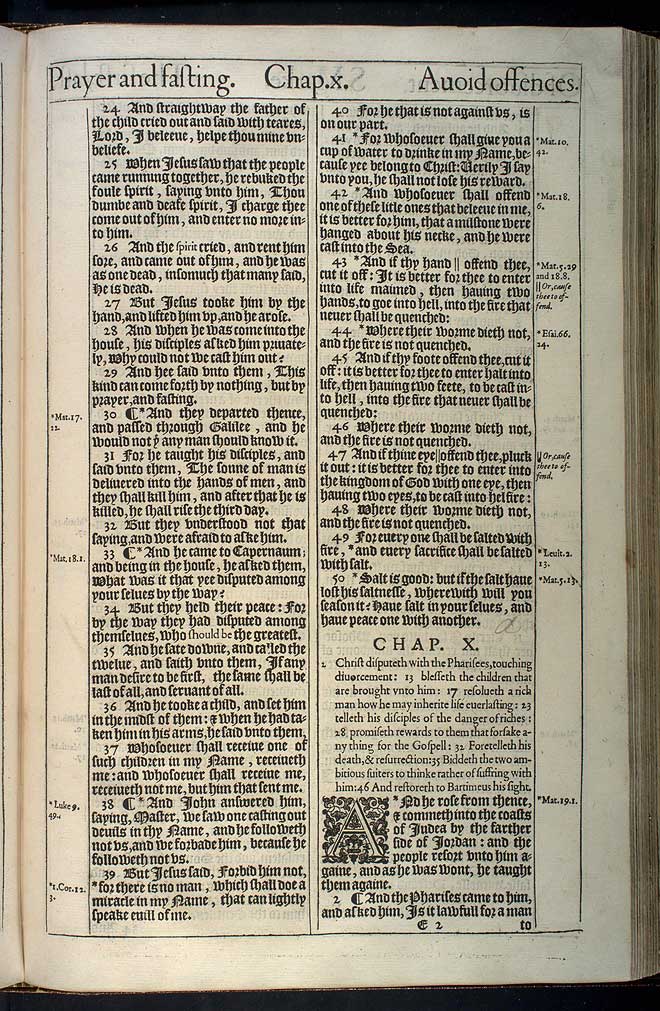 View this Marke chapter 9 scan at a larger size

2 Iesus is transfigured. 11 Hee instructeth his disciples, concerning the comming of Elias: 14 casteth forth a dumbe, and deafe spirit: 30 foretelleth his death and resurrection: 33 exhorteth his disciples to humilitie: 38 bidding them, not to prohibite such as be not against thē, nor to giue offence to any of the faithfull.

1 And hee said vnto them, Uerely I say vnto you, that there be some of them that stand here, which shal not taste of death, till they haue seene the kingdome of God come with power.1

2 ¶ And after sixe dayes, Iesus taketh with him Peter, and Iames, and Iohn, and leadeth them vp into an high mountaine apart by themselues: and he was transfigured before them.2

3 And his raiment became shining, exceeding white as snow: so as no Fuller on earth can white them.

4 And there appeared vnto them Elias with Moses: and they were talking with Iesus.

5 And Peter answered, and saide to Iesus, Master, it is good for vs to bee here, and let vs make three Tabernacles; one for thee, and one for Moses, and one for Elias.

6 For he wist not what to say, for they were sore afraid.

7 And there was a cloud that ouershadowed them: and a voyce came out of the cloud, saying, This is my beloued Sonne: heare him.

8 And suddenly when they had looked round about, they saw no man any more, saue Iesus only with themselues.

9 And as they came downe from the mountaine, he charged them that they should tell no man, what things they had seene, till the Sonne of man were risen from the dead.

10 And they kept that saying with themselues, questioning one with another, what the rising from the dead should meane.

11 ¶ And they asked him, saying, Why say the Scribes that Elias must first come?

12 And he answered, and told them, Elias verely commeth first, and restoreth al things, and how it is written of the Sonne of man, that he must suffer many things, and be set at nought.12

13 But I say vnto you, that Elias is indeed come, and they haue done vnto him whatsoeuer they listed, as it is written of him.

14 ¶ And when he came to his disciples, he saw a great multitude about them, and the Scribes questioning with them.14

15 And straightway all the people, when they beheld him, were greatly amazed, & running to him, saluted him.

16 And he asked the Scribes, What question ye with them?16

17 And one of the multitude answered, and said, Master, I haue broughe vnto thee my son, which hath a dumbe spirit:

18 And wheresoeuer he taketh him, he teareth him, & he fometh, and gnasheth with his teeth, and pineth away: and I spake to thy disciples, that they should cast him out, and they could not.18

20 And they brought him vnto him: and when he saw him, straightway the spirit tare him, and he fel on the ground, and wallowed, foming.

21 And he asked his father, Howe long is it agoe since this came vnto him? And he said, Of a child.

22 And oft times it hath cast him into the fire, and into the waters to destroy him: but if thou canst doe any thing, haue compassion on vs, and helpe vs.

23 Iesus said vnto him, If thou canst beleeue, all things are possible to him that beleeueth.

24 And straightway the father of the child cried out and said with teares, Lord, I beleeue, helpe thou mine vnbeliefe.

25 When Iesus saw that the people came running together, he rebuked the foule spirit, saying vnto him, Thou dumbe and deafe spirit, I charge thee come out of him, and enter no more into him.

26 And the spirit cried, and rent him sore, and came out of him, and he was as one dead, insomuch that many said, He is dead.

27 But Iesus tooke him by the hand, and lifted him vp, and he arose.

28 And when he was come into the house, his disciples asked him priuately, Why could not we cast him out?

29 And hee said vnto them, This kind can come forth by nothing, but by prayer, and fasting.

30 ¶ And they departed thence, and passed through Galilee, and he would not þt any man should know it.30

31 For he taught his disciples, and said vnto them, The sonne of man is deliuered into the hands of men, and they shall kill him, and after that he is killed, he shall rise the third day.

32 But they vnderstood not that saying, and were afraid to aske him.

33 ¶ And he came to Capernaum; and being in the house, he asked them, What was it that yee disputed among your selues by the way?33

34 But they held their peace: For by the way they had disputed among themselues, who should be the greatest.

35 And he sate downe, and called the twelue, and saith vnto them, If any man desire to be first, the same shall be last of all, and seruant of all.

36 And he tooke a child, and set him in the midst of them: & when he had taken him in his arms, he said vnto them,

39 But Iesus said, Forbid him not, for there is no man, which shall doe a miracle in my Name, that can lightly speake euill of me.39

41 For whosoeuer shall giue you a cup of water to drinke in my Name, because yee belong to Christ: Uerily I say vnto you, he shall not lose his reward.41

42 And whosoeuer shall offend one of these litle ones that beleeue in me, it is better for him, that a milstone were hanged about his necke, and he were cast into the Sea.42

43 And if thy hand offend thee, cut it off: It is better for thee to enter into life maimed, then hauing two hands, to goe into hell, into the fire that neuer shall be quenched:43

44 Where their worme dieth not, and the fire is not quenched.44

45 And if thy foote offend thee, cut it off: it is better for thee to enter halt into life, then hauing two feete, to be cast into hell, into the fire that neuer shall be quenched:

46 Where their worme dieth not, and the fire is not quenched.

47 And if thine eye offend thee, pluck it out: it is better for thee to enter into the kingdom of God with one eye, then hauing two eyes, to be cast into helfire:47

48 Where their worme dieth not, and the fire is not quenched.

50 Salt is good: but if the salt haue lost his saltnesse, wherewith will you season it? Haue salt in your selues, and haue peace one with another.50