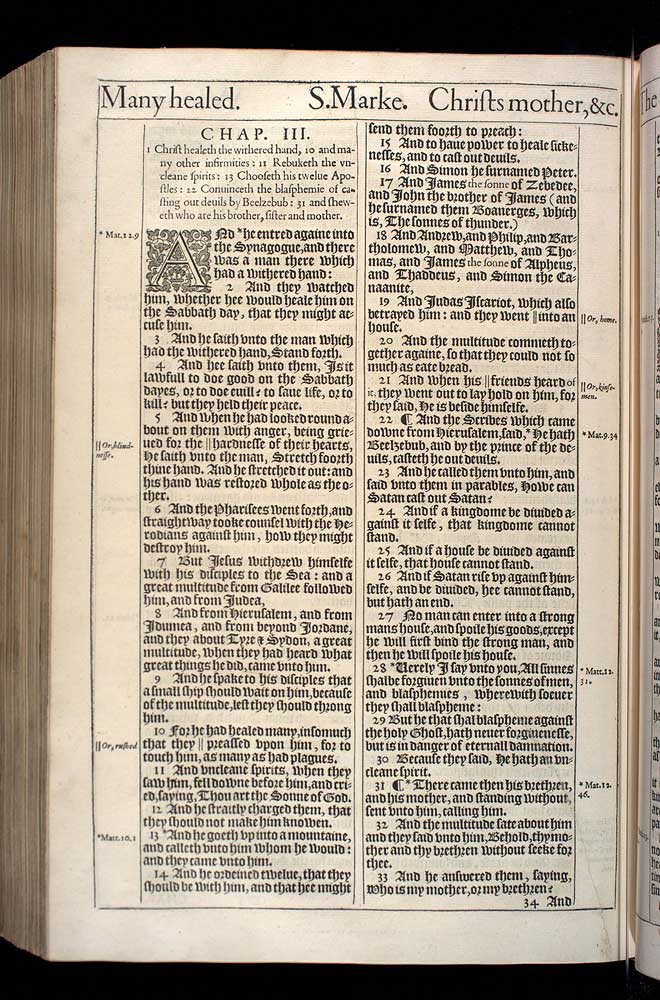 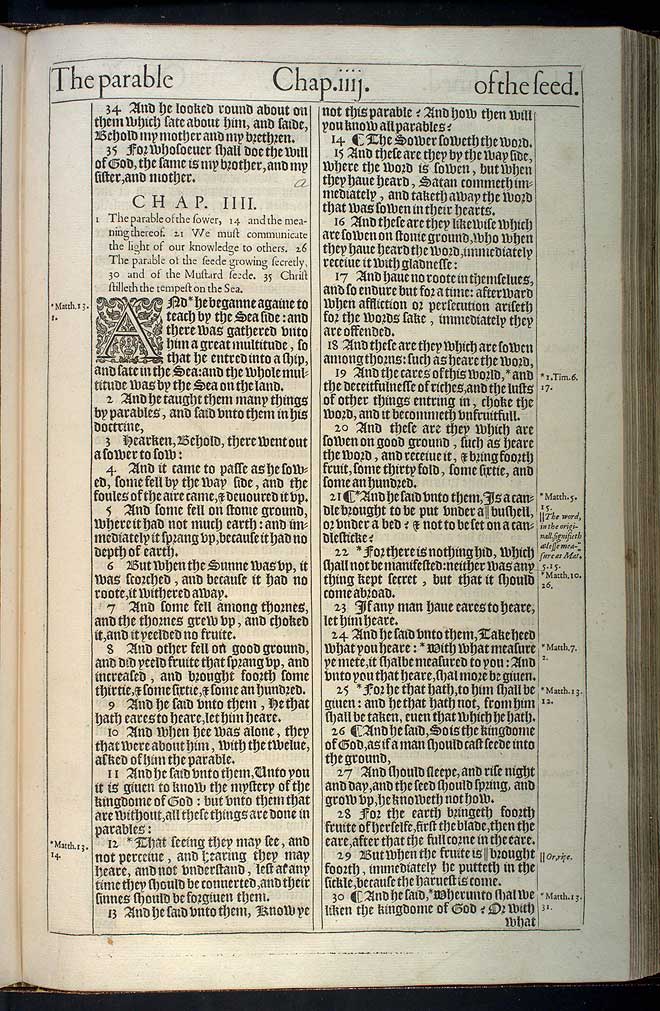 View this Marke chapter 3 scan at a larger size

1 Christ healeth the withered hand, 10 and many other infirmities: 11 Rebuketh the vncleane spirits: 13 Chooseth his twelue Apostles: 22 Conuinceth the blasphemie of casting out deuils by Beelzebub: 31 and sheweth who are his brother, sister and mother.

1 And he entred againe into the Synagogue, and there was a man there which had a withered hand:1

2 And they watched him, whether hee would heale him on the Sabbath day, that they might accuse him.

3 And he saith vnto the man which had the withered hand, Stand forth.

4 And hee saith vnto them, Is it lawfull to doe good on the Sabbath dayes, or to doe euill? to saue life, or to kill? but they held their peace.

5 And when he had looked round about on them with anger, being grieued for the hardnesse of their hearts, He saith vnto the man, Stretch foorth thine hand. And he stretched it out: and his hand was restored whole as the other.5

6 And the Pharisees went forth, and straightway tooke counsel with the Herodians against him, how they might destroy him.

7 But Iesus withdrew himselfe with his disciples to the Sea: and a great multitude from Galilee followed him, and from Iudea,

8 And from Hierusalem, and from Idumea, and from beyond Iordane, and they about Tyre & Sydon, a great multitude, when they had heard what great things he did, came vnto him.

9 And he spake to his disciples that a small ship should wait on him, because of the multitude, lest they should throng him.

10 For he had healed many, insomuch that they preassed vpon him, for to touch him, as many as had plagues.10

11 And vncleane spirits, when they saw him, fell downe before him, and cried, saying, Thou art the Sonne of God.

12 And he straitly charged them, that they should not make him knowen.

13 And he goeth vp into a mountaine, and calleth vnto him whom he would: and they came vnto him.13

14 And he ordeined twelue, that they should be with him, and that hee might send them foorth to preach:

15 And to haue power to heale sickenesses, and to cast out deuils.

16 And Simon he surnamed Peter.

17 And Iames the sonne of Zebedee, and Iohn the brother of Iames (and he surnamed them Boanerges, which is, The sonnes of thunder.)

18 And Andrew, and Philip, and Bartholomew, and Matthew, and Thomas, and Iames the sonne of Alpheus, and Thaddeus, and Simon the Canaanite,

19 And Iudas Iscariot, which also betrayed him: and they went into an house.19

20 And the multitude commeth together againe, so that they could not so much as eate bread.

21 And when his friends heard of it, they went out to lay hold on him, for they said, He is beside himselfe.21

22 ¶ And the Scribes which came downe from Hierusalem, said, He hath Beelzebub, and by the prince of the deuils, casteth he out deuils.22

23 And he called them vnto him, and said vnto them in parables, Howe can Satan cast out Satan?

24 And if a kingdome be diuided against it selfe, that kingdome cannot stand.

25 And if a house be diuided against it selfe, that house cannot stand.

26 And if Satan rise vp against himselfe, and be diuided, hee cannot stand, but hath an end.

27 No man can enter into a strong mans house, and spoile his goods, except he will first bind the strong man, and then he will spoile his house.

28 Uerely I say vnto you, All sinnes shalbe forgiuen vnto the sonnes of men, and blasphemies, wherewith soeuer they shall blaspheme:28

29 But he that shal blaspheme against the holy Ghost, hath neuer forgiuenesse, but is in danger of eternall damnation.

30 Because they said, He hath an vncleane spirit.

31 ¶ There came then his brethren, and his mother, and standing without, sent vnto him, calling him.31

32 And the multitude sate about him and they said vnto him, Behold, thy mother and thy brethren without seeke for thee.

33 And he answered them, saying, Who is my mother, or my brethren?

34 And he looked round about on them which sate about him, and saide, Behold my mother and my brethren.

35 For whosoeuer shall doe the will of God, the same is my brother, and my sister, and mother.