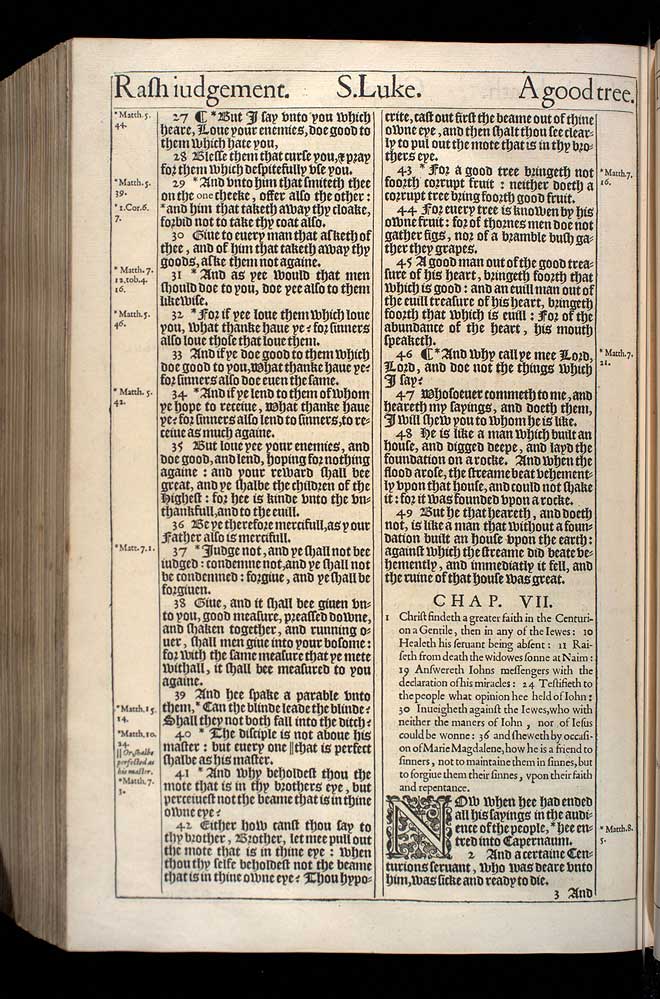 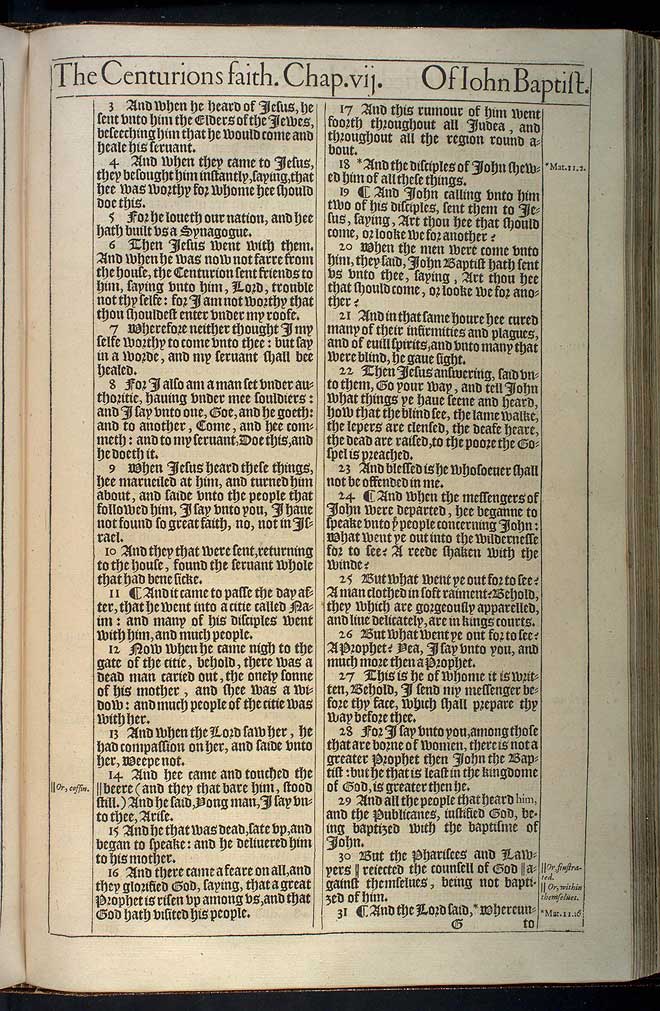 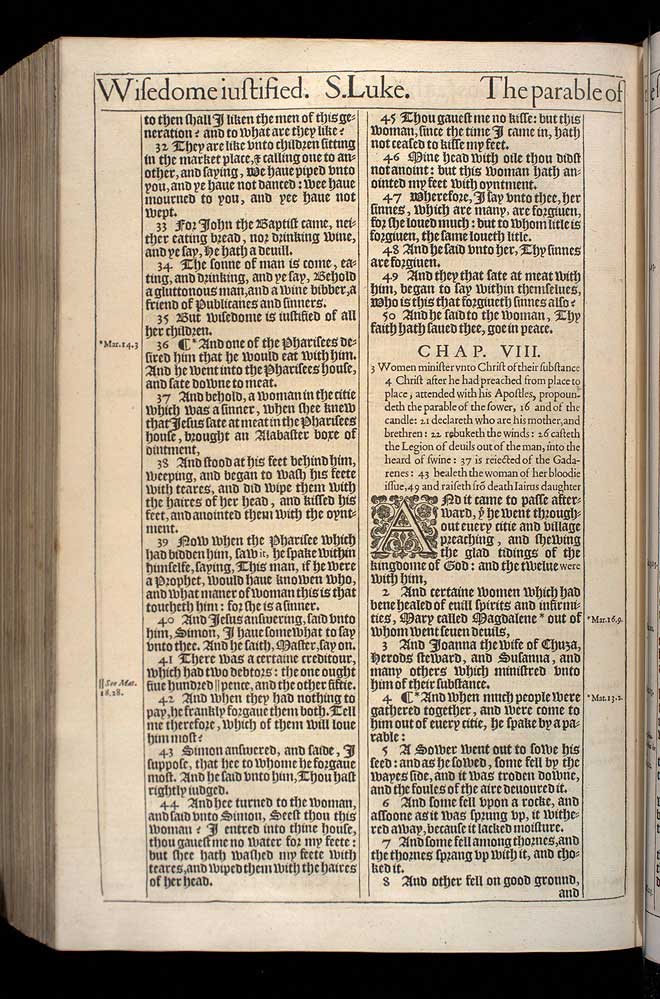 View this Luke chapter 7 scan at a larger size

1 Christ findeth a greater faith in the Centurion a Gentile, then in any of the Iewes: 10 Healeth his seruant being absent: 11 Raiseth from death the widowes sonne at Naim: 19 Answereth Iohns messengers with the declaration of his miracles: 24 Testifieth to the people what opinion hee held of Iohn: 30 Inueigheth against the Iewes, who with neither the maners of Iohn, nor of Iesus could be wonne: 36 and sheweth by occasion of Marie Magdalene, how he is a friend to sinners, not to maintaine them in sinnes, but to forgiue them their sinnes, vpon their faith and repentance.

1 Now when hee had ended all his sayings in the audience of the people, hee entred into Capernaum.1

2 And a certaine Centurions seruant, who was deare vnto him, was sicke and ready to die.

3 And when he heard of Iesus, he sent vnto him the Elders of the Iewes, beseeching him that he would come and heale his seruant.

4 And when they came to Iesus, they besought him instantly, saying, that hee was worthy for whome hee should doe this.

5 For he loueth our nation, and hee hath built vs a Synagogue.

6 Then Iesus went with them. And when he was now not farre from the house, the Centurion sent friends to him, saying vnto him, Lord, trouble not thy selfe: for I am not worthy that thou shouldest enter vnder my roofe.

7 Wherefore neither thought I my selfe worthy to come vnto thee: but say in a worde, and my seruant shall bee healed.

8 For I also am a man set vnder authoritie, hauing vnder mee souldiers: and I say vnto one, Goe, and he goeth: and to another, Come, and hee commeth: and to my seruant, Doe this, and he doeth it.

9 When Iesus heard these things, hee marueiled at him, and turned him about, and saide vnto the people that followed him, I say vnto you, I haue not found so great faith, no, not in Israel.

10 And they that were sent, returning to the house, found the seruant whole that had bene sicke.

11 ¶ And it came to passe the day after, that he went into a citie called Naim: and many of his disciples went with him, and much people.

12 Now when he came nigh to the gate of the citie, behold, there was a dead man caried out, the onely sonne of his mother, and shee was a widow: and much people of the citie was with her.

13 And when the Lord saw her, he had compassion on her, and saide vnto her, Weepe not.

14 And hee came and touched the beere (and they that bare him, stood still.) And he said, Yong man, I say vnto thee, Arise.14

15 And he that was dead, sate vp, and began to speake: and he deliuered him to his mother.

16 And there came a feare on all, and they glorified God, saying, that a great Prophet is risen vp among vs, and that God hath visited his people.

18 And the disciples of Iohn shewed him of all these things.18

19 ¶ And Iohn calling vnto him two of his disciples, sent them to Iesus, saying, Art thou hee that should come, or looke we for another?

20 When the men were come vnto him, they said, Iohn Baptist hath sent vs vnto thee, saying, Art thou hee that should come, or looke we for another?

21 And in that same houre hee cured many of their infirmities and plagues, and of euill spirits, and vnto many that were blind, he gaue sight.

22 Then Iesus answering, said vnto them, Go your way, and tell Iohn what things ye haue seene and heard, how that the blind see, the lame walke, the lepers are clensed, the deafe heare, the dead are raised, to the poore the Gospel is preached.

23 And blessed is he whosoeuer shall not be offended in me.

24 ¶ And when the messengers of Iohn were departed, hee beganne to speake vnto þe people concerning Iohn: What went ye out into the wildernesse for to see? A reede shaken with the winde?

25 But what went ye out for to see? A man clothed in soft raiment? Behold, they which are gorgeously apparelled, and liue delicately, are in kings courts.

26 But what went ye out for to see? A Prophet? Yea, I say vnto you, and much more then a Prophet.

27 This is he of whome it is written, Behold, I send my messenger before thy face, which shall prepare thy way before thee.

28 For I say vnto you, among those that are borne of women, there is not a greater Prophet then Iohn the Baptist: but he that is least in the kingdome of God, is greater then he.

29 And all the people that heard him, and the Publicanes, iustified God, being baptized with the baptisme of Iohn.

30 But the Pharisees and Lawyers reiected the counsell of God against themselues, being not baptized of him.30

31 ¶ And the Lord said, whereunto then shall I liken the men of this generation? and to what are they like?31

32 They are like vnto children sitting in the market place, & calling one to another, and saying, We haue piped vnto you, and ye haue not danced: wee haue mourned to you, and yee haue not wept.

33 For Iohn the Baptist came, neither eating bread, nor drinking wine, and ye say, He hath a deuill.

34 The sonne of man is come, eating, and drinking, and ye say, Behold a gluttonous man, and a wine bibber, a friend of Publicanes and sinners.

36 ¶ And one of the Pharisees desired him that he would eat with him. And he went into the Pharisees house, and sate downe to meat.36

37 And behold, a woman in the citie which was a sinner, when shee knew that Iesus sate at meat in the Pharisees house, brought an Alabaster boxe of ointment,

38 And stood at his feet behind him, weeping, and began to wash his feete with teares, and did wipe them with the haires of her head, and kissed his feet, and anointed them with the oyntment.

39 Now when the Pharisee which had bidden him, saw it, he spake within himselfe, saying, This man, if he were a Prophet, would haue knowen who, and what maner of woman this is that toucheth him: for she is a sinner.

40 And Iesus answering, said vnto him, Simon, I haue somewhat to say vnto thee. And he saith, Master, say on.

41 There was a certaine creditour, which had two debtors: the one ought fiue hundred pence, and the other fiftie.41

42 And when they had nothing to pay, he frankly forgaue them both. Tell me therefore, which of them will loue him most?

43 Simon answered, and saide, I suppose, that hee to whome he forgaue most. And he said vnto him, Thou hast rightly iudged.

44 And hee turned to the woman, and said vnto Simon, Seest thou this woman? I entred into thine house, thou gauest me no water for my feete: but shee hath washed my feete with teares, and wiped them with the haires of her head.

45 Thou gauest me no kisse: but this woman, since the time I came in, hath not ceased to kisse my feet.

46 Mine head with oile thou didst not anoint: but this woman anointed my feet with oyntment.

47 Wherefore, I say vnto thee, her sinnes, which are many, are forgiuen, for she loued much: but to whom litle is forgiuen, the same loueth litle.

48 And he said vnto her, Thy sinnes are forgiuen.

49 And they that sate at meat with him, began to say within themselues, Who is this that forgiueth sinnes also?

50 And he said to the woman, Thy faith hath saued thee, goe in peace.