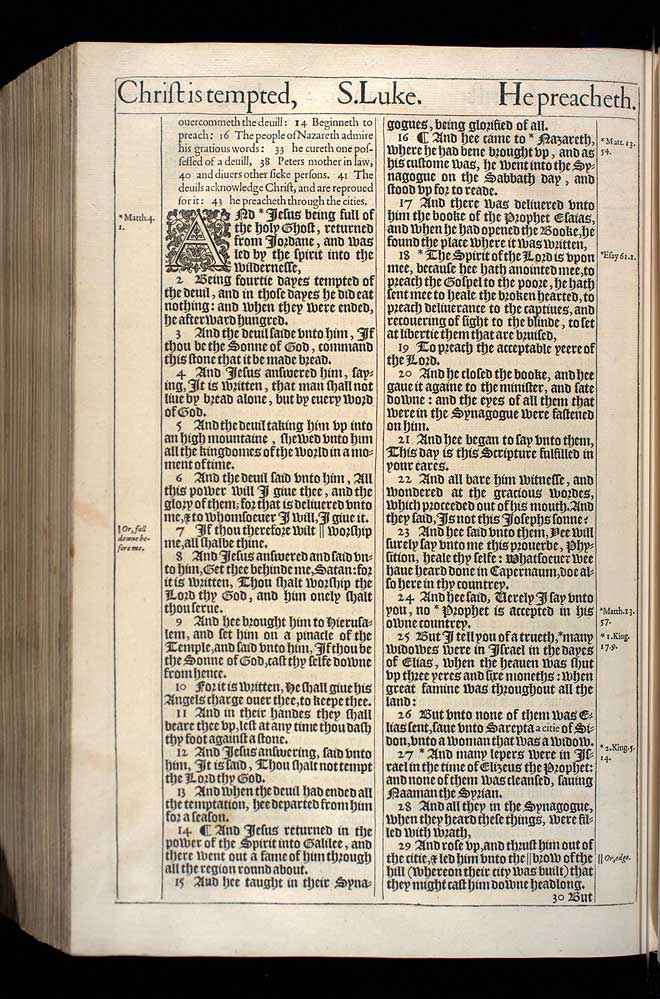 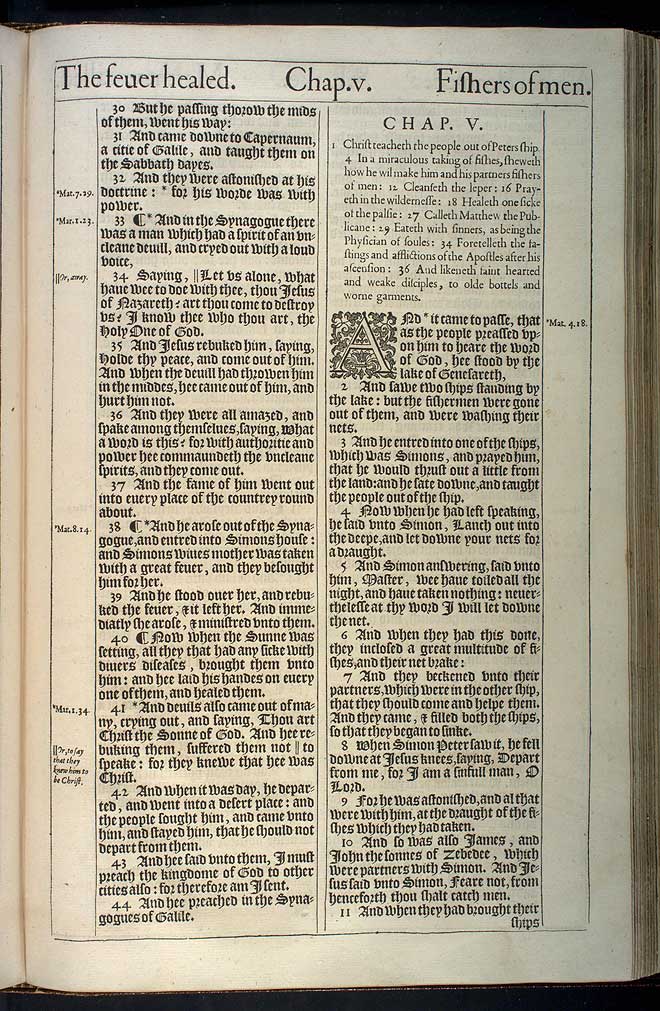 View this Luke chapter 4 scan at a larger size

1 The temptation and fasting of Christ: 13 He ouercommeth the deuill: 14 Beginneth to preach: 16 The people of Nazareth admire his gratious words: 33 he cureth one possessed of a deuill, 38 Peters mother in law, 40 and diuers other sicke persons. 41 The deuils acknowledge Christ, and are reproued for it: 43 he preacheth through the cities.

1 And Iesus being full of the holy Ghost, returned from Iordane, and was led by the spirit into the wildernesse,1

2 Being fourtie dayes tempted of the deuil, and in those dayes he did eat nothing: and when they were ended, he afterward hungred.

3 And the deuil saide vnto him, If thou be the Sonne of God, command this stone that it be made bread.

4 And Iesus answered him, saying, It is written, that man shall not liue by bread alone, but by euery word of God.

5 And the deuil taking him vp into an high mountaine, shewed vnto him all the kingdomes of the world in a moment of time.

6 And the deuil said vnto him, All this power will I giue thee, and the glory of them; for that is deliuered vnto me, & to whomsoeuer I will, I giue it.

7 If thou therefore wilt worship me, all shalbe thine.7

8 And Iesus answered and said vnto him, Get thee behinde me, Satan: for it is written, Thou shalt worship the Lord thy God, and him onely shalt thou serue.

9 And hee brought him to Hierusalem, and set him on a pinacle of the Temple, and said vnto him, If thou be the Sonne of God, cast thy selfe downe from hence.

10 For it is written, He shall giue his Angels charge ouer thee, to keepe thee.

11 And in their handes they shall beare thee vp, lest at any time thou dash thy foot against a stone.

12 And Iesus answering, said vnto him, It is said, Thou shalt not tempt the Lord thy God.

13 And when the deuil had ended all the temptation, hee departed from him for a season.

14 ¶ And Iesus returned in the power of the Spirit into Galilee, and there went out a fame of him through all the region round about.

15 And hee taught in their Synagogues, being glorified of all.

16 ¶ And hee came to Nazareth, where he had bene brought vp, and as his custome was, he went into the Synagogue on the Sabbath day, and stood vp for to reade.16

17 And there was deliuered vnto him the booke of the Prophet Esaias, and when he had opened the Booke, he found the place where it was written,

18 The Spirit of the Lord is vpon mee, because hee hath anointed mee, to preach the Gospel to the poore, he hath sent mee to heale the broken hearted, to preach deliuerance to the captiues, and recouering of sight to the blinde, to set at libertie them that are bruised,18

19 To preach the acceptable yeere of the Lord.

20 And he closed the booke, and hee gaue it againe to the minister, and sate downe: and the eyes of all them that were in the Synagogue were fastened on him.

21 And hee began to say vnto them, This day is this Scripture fulfilled in your eares.

22 And all bare him witnesse, and wondered at the gracious wordes, which proceeded out of his mouth. And they said, Is not this Iosephs sonne?

23 And hee said vnto them, Yee will surely say vnto me this prouerbe, Physition, heale thy selfe: Whatsoeuer wee haue heard done in Capernaum, doe also here in thy countrey.

24 And hee said, Verely I say vnto you, no Prophet is accepted in his owne countrey.24

25 But I tell you of a trueth, many widowes were in Israel in the dayes of Elias, when the heauen was shut vp three yeres and sixe moneths: when great famine was throughout all the land:25

26 But vnto none of them was Elias sent, saue vnto Sarepta a citie of Sidon, vnto a woman that was a widow.

27 And many lepers were in Israel in the time of Elizeus the Prophet: and none of them was cleansed, sauing Naaman the Syrian.27

28 And all they in the Synagogue, when they heard these things, were filled with wrath,

29 And rose vp, and thrust him out of the citie, & led him vnto the brow of the hill (whereon their city was built) that they might cast him downe headlong.29

30 But he passing thorow the mids of them, went his way:

31 And came downe to Capernaum, a citie of Galile, and taught them on the Sabbath dayes.

32 And they were astonished at his doctrine: for his worde was with power.32

33 ¶ And in the Synagogue there was a man which had a spirit of an vncleane deuill, and cryed out with a loud voice,33

34 Saying, Let vs alone, what haue wee to doe with thee, thou Iesus of Nazareth? art thou come to destroy vs? I know thee who thou art, the Holy One of God.34

35 And Iesus rebuked him, saying, Holde thy peace, and come out of him. And when the deuill had throwen him in the middes, hee came out of him, and hurt him not.

36 And they were all amazed, and spake among themselues, saying, What a word is this? for with authoritie and power hee commaundeth the vncleane spirits, and they come out.

37 And the fame of him went out into euery place of the countrey round about.

38 ¶ And he arose out of the Synagogue, and entred into Simons house: and Simons wiues mother was taken with a great feuer, and they besought him for her.38

39 And he stood ouer her, and rebuked the feuer, & it left her. And immediatly she arose, & ministred vnto them.

40 ¶ Now when the Sunne was setting, all they that had any sicke with diuers diseases, brought them vnto him: and hee laid his handes on euery one of them, and healed them.

41 And deuils also came out of many, crying out, and saying, Thou art Christ the Sonne of God. And hee rebuking them, suffered them not to speake: for they knewe that hee was Christ.41

42 And when it was day, he departed, and went into a desert place: and the people sought him, and came vnto him, and stayed him, that he should not depart from them.

43 And hee said vnto them, I must preach the kingdome of God to other cities also: for therefore am I sent.

44 And hee preached in the Synagogues of Galile.