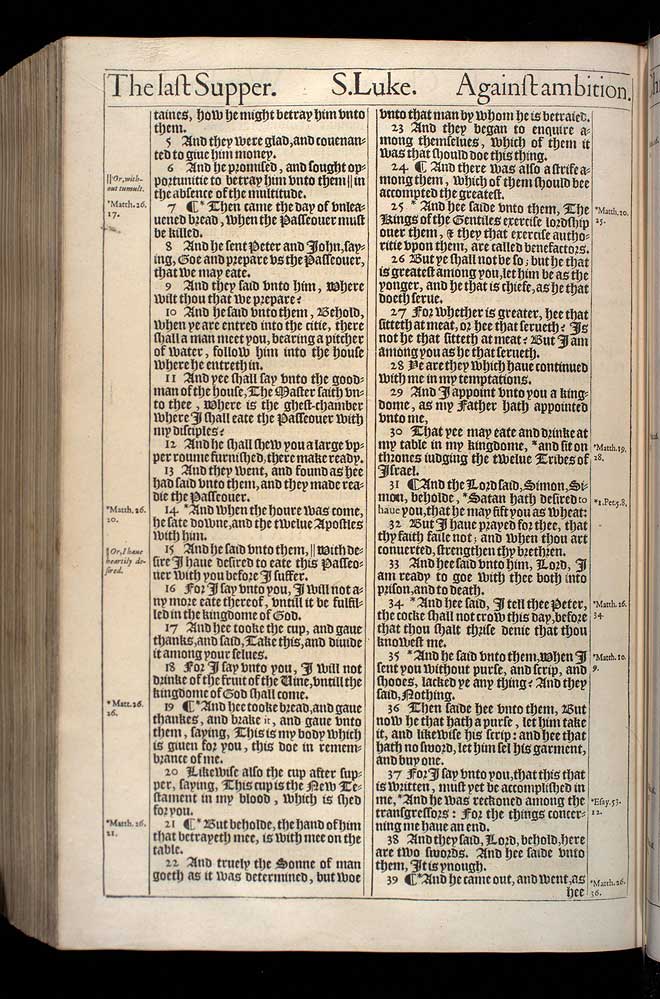 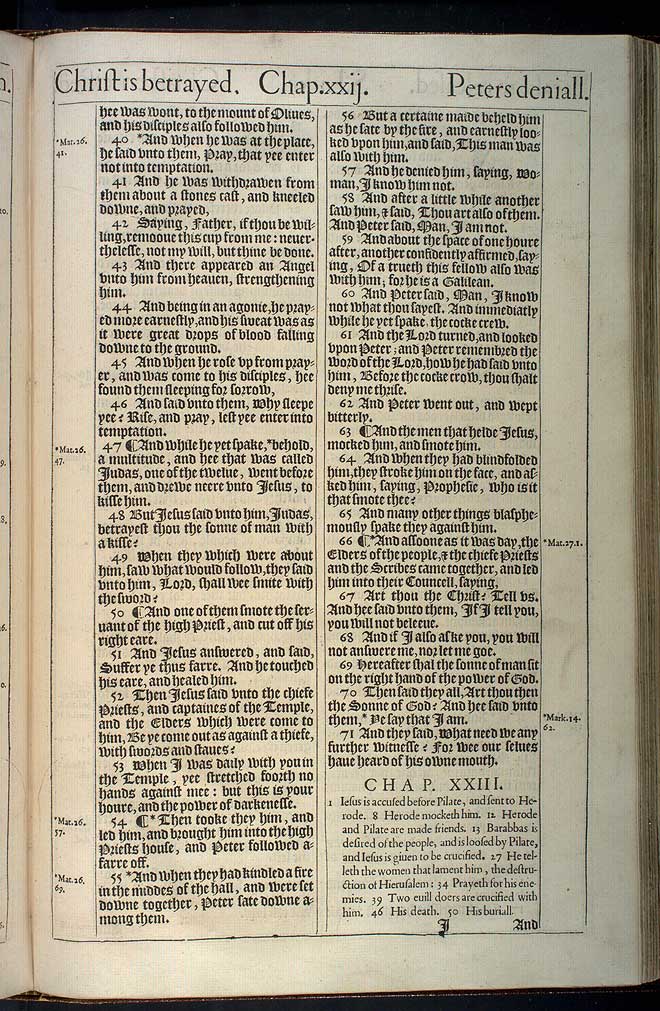 View this Luke chapter 22 scan at a larger size

1 The Iewes conspire against Christ. 3 Satan prepareth Iudas to betray him. 7 The Apostles prepare the Passeouer. 19 Christ instituteth his holy supper, 21 couertly foretelleth of the traitour, 24 dehorteth the rest of his Apostles from ambition, 31 assureth Peter his faith should not faile: 34 and yet he should denie him thrise. 39 He prayeth in the mount, and sweateth blood, 47 is betrayed with a kisse: 50 hee healeth Malchus eare, 54 he is thrise denied of Peter, 63 shamefully abused, 66 and confesseth himselfe to be the sonne of God.

1 Now þe feast of vnleuened bread drew nigh, which is called the Passeouer.1

2 And the chiefe Priests and Scribes sought how they might kill him; for they feared the people.

3 ¶ Then entred Satan into Iudas surnamed Iscariot, being of the number of the twelue.3

4 And he went his way, and communed with the chiefe Priests and captaines, how he might betray him vnto them.

5 And they were glad, and couenanted to giue him money.

6 And he promised, and sought opportunitie to betray him vnto them in the absence of the multitude.6

7 ¶ Then came the day of vnleauened bread, when the Passeouer must be killed.7

8 And he sent Peter and Iohn, saying, Goe and prepare vs the Passeouer, that we may eate.

9 And they said vnto him, Where wilt thou that we prepare?

10 And he said vnto them, Behold, when ye are entred into the citie, there shall a man meet you, bearing a pitcher of water, follow him into the house where he entreth in.

11 And yee shall say vnto the goodman of the house, The Master saith vnto thee, Where is the ghest-chamber where I shall eate the Passeouer with my disciples?

12 And he shall shew you a large vpper roume furnished, there make ready.

13 And they went, and found as hee had said vnto them, and they made readie the Passeouer.

14 And when the houre was come, he sate downe, and the twelue Apostles with him.14

15 And he said vnto them, With desire I haue desired to eate this Passeouer with you before I suffer.15

16 For I say vnto you, I will not any more eate thereof, vntill it be fulfilled in the kingdome of God.

17 And hee tooke the cup, and gaue thanks, and said, Take this, and diuide it among your selues.

18 For I say vnto you, I will not drinke of the fruit of the Uine, vntill the kingdome of God shall come.

19 ¶ And hee tooke bread, and gaue thankes, and brake it, and gaue vnto them, saying, This is my body which is giuen for you, this doe in remembrance of me.19

20 Likewise also the cup after supper, saying, This cup is the New Testament in my blood, which is shed for you.

21 ¶ But beholde, the hand of him that betrayeth mee, is with mee on the table.21

22 And truly the Sonne of man goeth as it was determined, but woe vnto that man by whom he is betraied.

23 And they began to enquire among themselues, which of them it was that should doe this thing.

24 ¶ And there was also a strife among them, which of them should bee accompted the greatest.

25 And hee saide vnto them, The Kings of the Gentiles exercise lordship ouer them, & they that exercise authoritie vpon them, are called benefactors.25

26 But ye shall not be so; but he that is greatest among you, let him be as the yonger, and he that is chiefe, as he that doeth serue.

28 Ye are they which haue continued with me in my temptations.

29 And I appoint vnto you a kingdome, as my Father hath appointed vnto me,

30 That yee may eate and drinke at my table in my kingdome, and sit on thrones iudging the twelue Tribes of Israel.30

31 ¶ And the Lord said, Simon, Simon, beholde, Satan hath desired to haue you, that he may sift you as wheat:31

32 But I haue prayed for thee, that thy faith faile not; and when thou art conuerted, strengthen thy brethren.

33 And hee said vnto him, Lord, I am ready to goe with thee both into prison, and to death.

34 And hee said, I tell thee Peter, the cocke shall not crow this day, before that thou shalt thrise denie that thou knowest me.34

35 And he said vnto them, When I sent you without purse, and scrip, and shooes, lacked ye any thing? And they said, Nothing.35

36 Then saide hee vnto them, But now he that hath a purse, let him take it, and likewise his scrip: and hee that hath no sword, let him sel his garment, and buy one.

37 For I say vnto you, that this that is written, must yet be accomplished in me, And he was reckoned among the transgressors: For the things concerning me haue an end.37

38 And they said, Lord, behold, here are two swords. And hee saide vnto them, It is ynough.

39 ¶ And he came out, and went, as hee was wont, to the mount of Oliues, and his disciples also followed him.39

40 And when he was at the place, he said vnto them, Pray, that yee enter not into temptation.40

41 And he was withdrawen from them about a stones cast, and kneeled downe, and prayed,

42 Saying, Father, if thou be willing, remooue this cup from me: neuerthelesse, not my will, but thine be done.

43 And there appeared an Angel vnto him from heauen, strengthening him.

44 And being in an agonie, he prayed more earnestly, and his sweat was as it were great drops of blood falling downe to the ground.

45 And when he rose vp from prayer, and was come to his disciples, hee found them sleeping for sorrow,

46 And said vnto them, Why sleepe yee? Rise, and pray, lest yee enter into temptation.

47 ¶ And while he yet spake, behold, a multitude, and hee that was called Iudas, one of the twelue, went before them, and drewe neere vnto Iesus, to kisse him.47

48 But Iesus said vnto him, Iudas, betrayest thou the sonne of man with a kisse?

49 When they which were about him, saw what would follow, they said vnto him, Lord, shall wee smite with the sword?

50 ¶ And one of them smote the seruant of the high Priest, and cut off his right eare.

51 And Iesus answered, and said, Suffer ye thus farre. And he touched his eare, and healed him.

52 Then Iesus said vnto the chiefe Priests, and captaines of the Temple, and the Elders which were come to him, Be ye come out as against a thiefe, with swords and staues?

53 When I was daily with you in the Temple, yee stretched foorth no hands against mee: but this is your houre, and the power of darkenesse.

54 ¶ Then tooke they him, and led him, and brought him into the high Priests house, and Peter followed afarre off.54

55 And when they had kindled a fire in the middes of the hall, and were set downe together, Peter sate downe among them.55

56 But a certaine maide beheld him as he sate by the fire, and earnestly looked vpon him, and said, This man was also with him.

58 And after a little while another saw him, & said, Thou art also of them. And Peter said, Man, I am not.

59 And about the space of one houre after, another confidently affirmed, saying, Of a trueth this fellow also was with him; for he is a Galilean.

60 And Peter said, Man, I know not what thou sayest. And immediately while he yet spake, the cocke crew.

61 And the Lord turned, and looked vpon Peter; and Peter remembred the word of the Lord, how he had said vnto him, Before the cocke crow, thou shalt deny me thrise.

62 And Peter went out, and wept bitterly.

63 ¶ And the men that helde Iesus, mocked him, and smote him.

64 And when they had blindfolded him, they stroke him on the face, and asked him, saying, Prophesie, who is it that smote thee?

65 And many other things blasphemously spake they against him.

66 ¶ And assoone as it was day, the Elders of the people, & the chiefe Priests and the Scribes came together, and led him into their Councell, saying,66

67 Art thou the Christ? Tell vs. And hee said vnto them, If I tell you, you will not beleeue.

68 And if I also aske you, you will not answere me, nor let me goe.

69 Hereafter shal the sonne of man sit on the right hand of the power of God.

70 Then said they all, Art thou then the Sonne of God? And hee said vnto them, Ye say that I am.70

71 And they said, What need we any further witnesse? For wee our selues haue heard of his owne mouth.