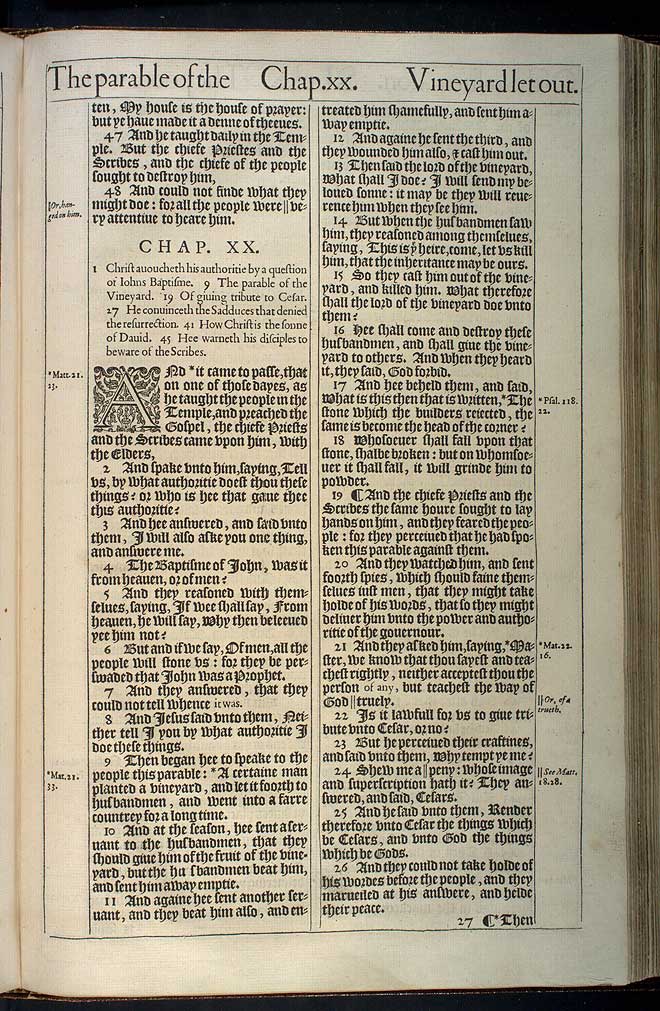 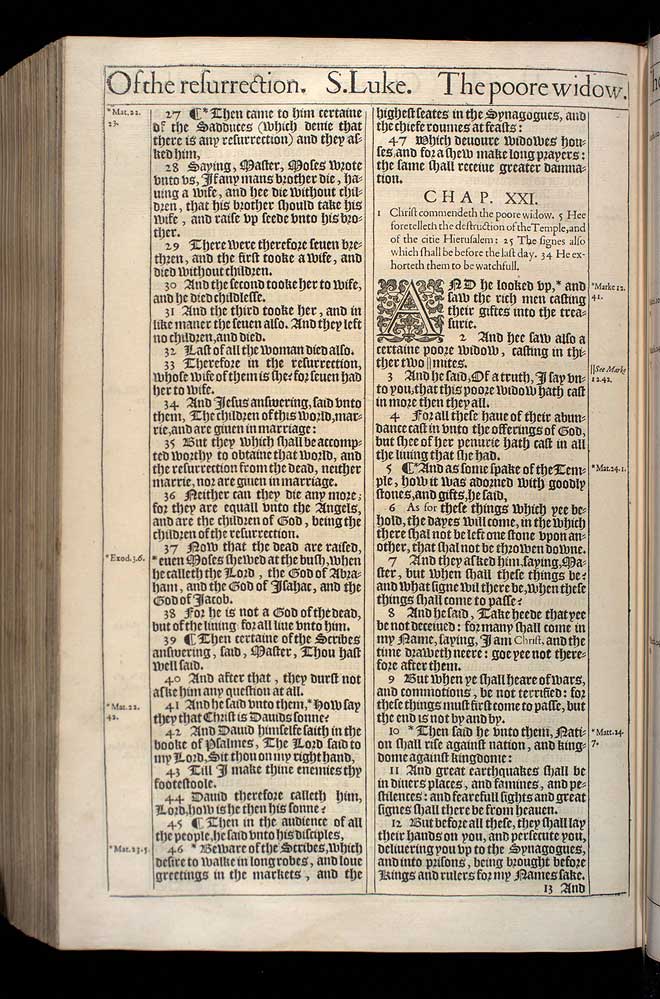 View this Luke chapter 20 scan at a larger size

1 Christ auoucheth his authoritie by a question of Iohns Baptisme. 9 The parable of the Vineyard. 19 Of giuing tribute to Cesar. 27 He conuinceth the Sadduces that denied the resurrection. 41 How Christ is the sonne of Dauid. 45 Hee warneth his disciples to beware of the Scribes.

1 And it came to passe, that on one of those dayes, as he taught the people in the Temple, and preached the Gospel, the chiefe Priests and the Scribes came vpon him, with the Elders,1

2 And spake vnto him, saying, Tell vs, by what authoritie doest thou these things? or who is hee that gaue thee this authoritie?

3 And hee answered, and said vnto them, I will also aske you one thing, and answere me.

4 The Baptisme of Iohn, was it from heauen, or of men?

5 And they reasoned with themselues, saying, If wee shall say, From heauen, he will say, Why then beleeued yee him not?

6 But and if we say, Of men, all the people will stone vs: for they be perswaded that Iohn was a Prophet.

7 And they answered, that they could not tell whence it was.

8 And Iesus said vnto them, Neither tell I you by what authoritie I doe these things.

9 Then began hee to speake to the people this parable: A certaine man planted a vineyard, and let it foorth to husbandmen, and went into a farre countrey for a long time.9

10 And at the season, hee sent a seruant to the husbandmen, that they should giue him of the fruit of the vineyard, but the husbandmen beat him, and sent him away emptie.

11 And againe hee sent another seruant, and they beat him also, and entreated him shamefully, and sent him away emptie.

12 And againe he sent the third, and they wounded him also, & cast him out.

13 Then said the lord of the vineyard, What shall I doe? I will send my beloued sonne: it may be they will reuerence him when they see him.

14 But when the husbandmen saw him, they reasoned among themselues, saying, This is þe heire, come, let vs kill him, that the inheritance may be ours.

16 Hee shall come and destroy these husbandmen, and shall giue the vineyard to others. And when they heard it, they said, God forbid.

17 And hee beheld them, and said, What is this then that is written, The stone which the builders reiected, the same is become the head of the corner?17

18 Whosoeuer shall fall vpon that stone, shalbe broken: but on whomsoeuer it shall fall, it will grinde him to powder.

19 ¶ And the chiefe Priests and the Scribes the same houre sought to lay hands on him, and they feared the people: for they perceiued that he had spoken this parable against them.

20 And they watched him, and sent foorth spies, which should faine themselues iust men, that they might take holde of his words, that so they might deliuer him vnto the power and authoritie of the gouernour.

21 And they asked him, saying, Master, we know that thou sayest and teachest rightly, neither acceptest thou the person of any, but teachest the way of God truely.21

22 Is it lawfull for vs to giue tribute vnto Cesar, or no?

23 But he perceiued their craftines, and said vnto them, Why tempt ye me?

24 Shew me a peny: whose image and superscription hath it? They answered, and said, Cesars.24

26 And they could not take holde of his wordes before the people, and they marueiled at his answere, and helde their peace.

27 ¶ Then came to him certaine of the Sadduces (which denie that there is any resurrection) and they asked him,27

28 Saying, Master, Moses wrote vnto vs, If any mans brother die, hauing a wife, and hee die without children, that his brother should take his wife, and raise vp seede vnto his brother.

29 There were therefore seuen brethren, and the first tooke a wife, and died without children.

30 And the second tooke her to wife, and he died childlesse.

31 And the third tooke her, and in like maner the seuen also. And they left no children, and died.

32 Last of all the woman died also.

33 Therefore in the resurrection, whose wife of them is she? for seuen had her to wife.

34 And Iesus answering, said vnto them, The children of this world, marrie, and are giuen in marriage:

35 But they which shall be accompted worthy to obtaine that world, and the resurrection from the dead, neither marrie, nor are giuen in marriage.

38 For he is not a God of the dead, but of the liuing for all liue vnto him.

39 ¶ Then certaine of the Scribes answering, said, Master, Thou hast well said.

40 And after that, they durst not aske him any question at all.

41 And he said vnto them, How say they that Christ is Dauids sonne?41

42 And Dauid himselfe saith in the booke of Psalmes, The Lord said to my Lord, Sit thou on my right hand,

43 Till I make thine enemies thy footestoole.

44 Dauid therefore calleth him, Lord, how is he then his sonne?

45 ¶ Then in the audience of all the people, he said vnto his disciples,

46 Beware of the Scribes, which desire to walke in long robes, and loue greetings in the markets, and the highest seates in the Synagogues, and the chiefe roumes at feasts:46

47 Which deuoure widowes houses and for a shew make long prayers: the same shall receiue greater damnation.