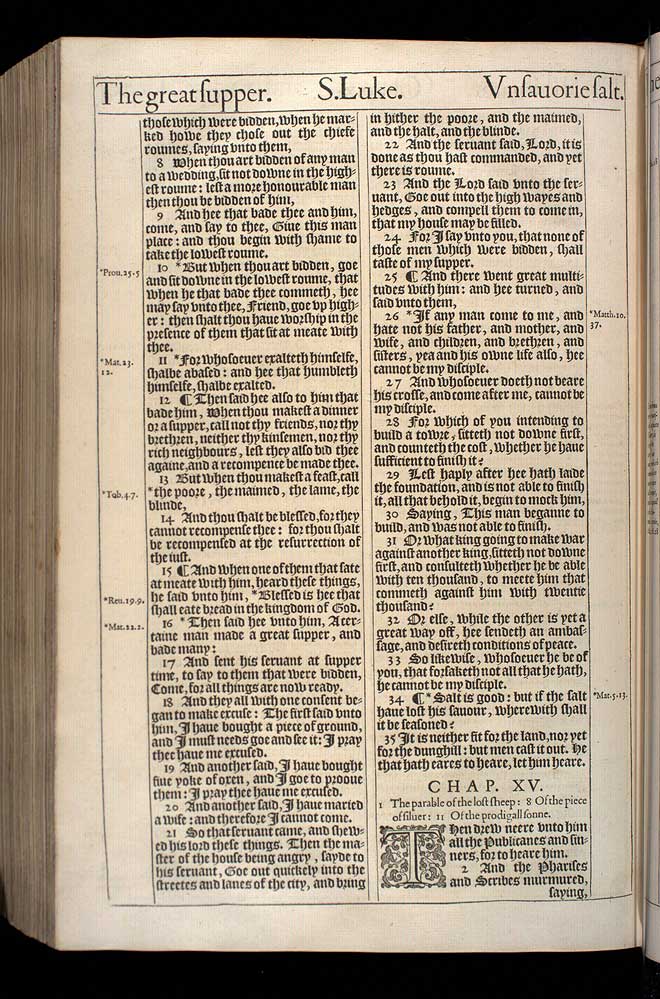 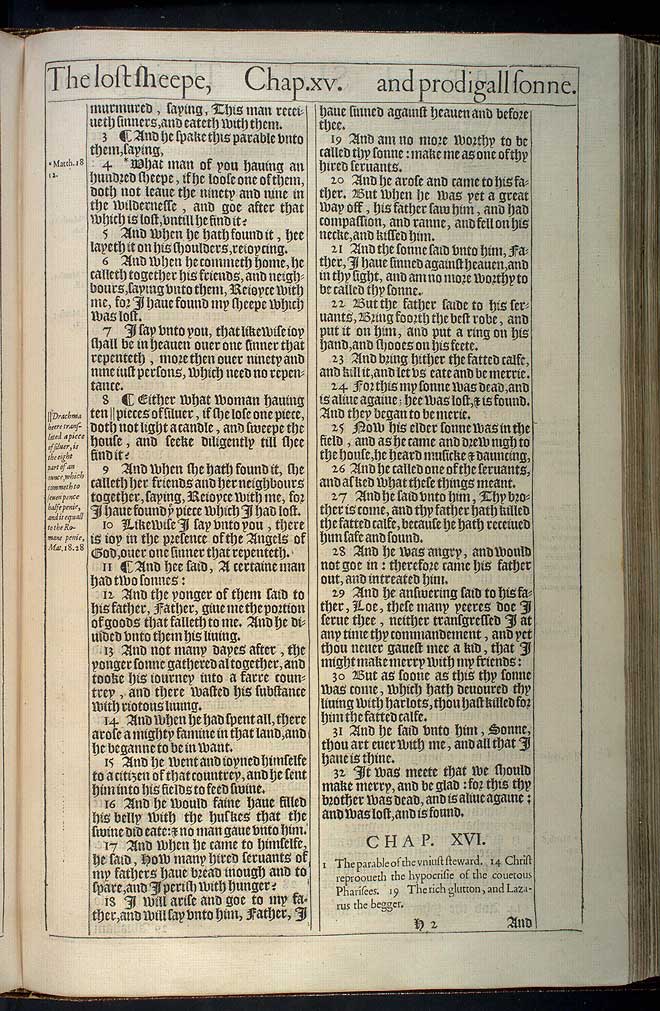 View this Luke chapter 15 scan at a larger size

1 The parable of the lost sheep: 8 Of the piece of siluer: 11 Of the prodigall sonne.

1 Then drew neere vnto him all the Publicanes and sinners, for to heare him.

2 And the Pharises and Scribes murmured, murmured, saying, This man receiueth sinners, and eateth with them.

3 ¶ And he spake this parable vnto them, saying,

4 What man of you hauing an hundred sheepe, if he loose one of them, doth not leaue the ninety and nine in the wildernesse, and goe after that which is lost, vntill he find it?4

5 And when he hath found it, hee layeth it on his shoulders, reioycing.

6 And when he commeth home, he calleth together his friends, and neighbours, saying vnto them, Reioyce with me, for I haue found my sheepe which was lost.

7 I say vnto you, that likewise ioy shall be in heauen ouer one sinner that repenteth, more then ouer ninety and nine iust persons, which need no repentance.

8 ¶ Either what woman hauing ten pieces of siluer, if she lose one piece, doth not light a candle, and sweepe the house, and seeke diligently till shee find it?8

9 And when she hath found it, she calleth her friends and her neighbours together, saying, Reioyce with me, for I haue found þe piece which I had lost.

10 Likewise I say vnto you, there is ioy in the presence of the Angels of God, ouer one sinner that repenteth.

11 ¶ And hee said, A certaine man had two sonnes:

12 And the yonger of them said to his father, Father, giue me the portion of goods that falleth to me. And he diuided vnto them his liuing.

13 And not many dayes after, the yonger sonne gathered al together, and tooke his iourney into a farre countrey, and there wasted his substance with riotous liuing.

14 And when he had spent all, there arose a mighty famine in that land, and he beganne to be in want.

15 And he went and ioyned himselfe to a citizen of that countrey, and he sent him into his fields to feed swine.

16 And he would faine haue filled his belly with the huskes that the swine did eate: & no man gaue vnto him.

17 And when he came to himselfe, he said, How many hired seruants of my fathers haue bread inough and to spare, and I perish with hunger?

18 I will arise and goe to my father, and will say vnto him, Father, I haue sinned against heauen and before thee.

19 And am no more worthy to be called thy sonne: make me as one of thy hired seruants.

20 And he arose and came to his father. But when he was yet a great way off, his father saw him, and had compassion, and ranne, and fell on his necke, and kissed him.

21 And the sonne said vnto him, Father, I haue sinned against heauen, and in thy sight, and am no more worthy to be called thy sonne.

22 But the father saide to his seruants, Bring foorth the best robe, and put it on him, and put a ring on his hand, and shooes on his feete.

23 And bring hither the fatted calfe, and kill it, and let vs eate and be merrie.

24 For this my sonne was dead, and is aliue againe; hee was lost, & is found. And they began to be merie.

25 Now his elder sonne was in the field, and as he came and drew nigh to the house, he heard musicke & dauncing,

26 And he called one of the seruants, and asked what these things meant.

27 And he said vnto him, Thy brother is come, and thy father hath killed the fatted calfe, because he hath receiued him safe and sound.

28 And he was angry, and would not goe in: therefore came his father out, and intreated him.

29 And he answering said to his father, Loe, these many yeeres doe I serue thee, neither transgressed I at any time thy commandement, and yet thou neuer gauest mee a kid, that I might make merry with my friends:

30 But as soone as this thy sonne was come, which hath deuoured thy liuing with harlots, thou hast killed for him the fatted calfe.

31 And he said vnto him, Sonne, thou art euer with me, and all that I haue is thine.

32 It was meete that we should make merry, and be glad: for this thy brother was dead, and is aliue againe: and was lost, and is found.

4 Matth. 18 12.
8 Drachma heere translated a piece of silver, is the eight part of an ounce which commeth to seven pence halfe penie, and is equall to the Romane penie, Mat. 18. 28