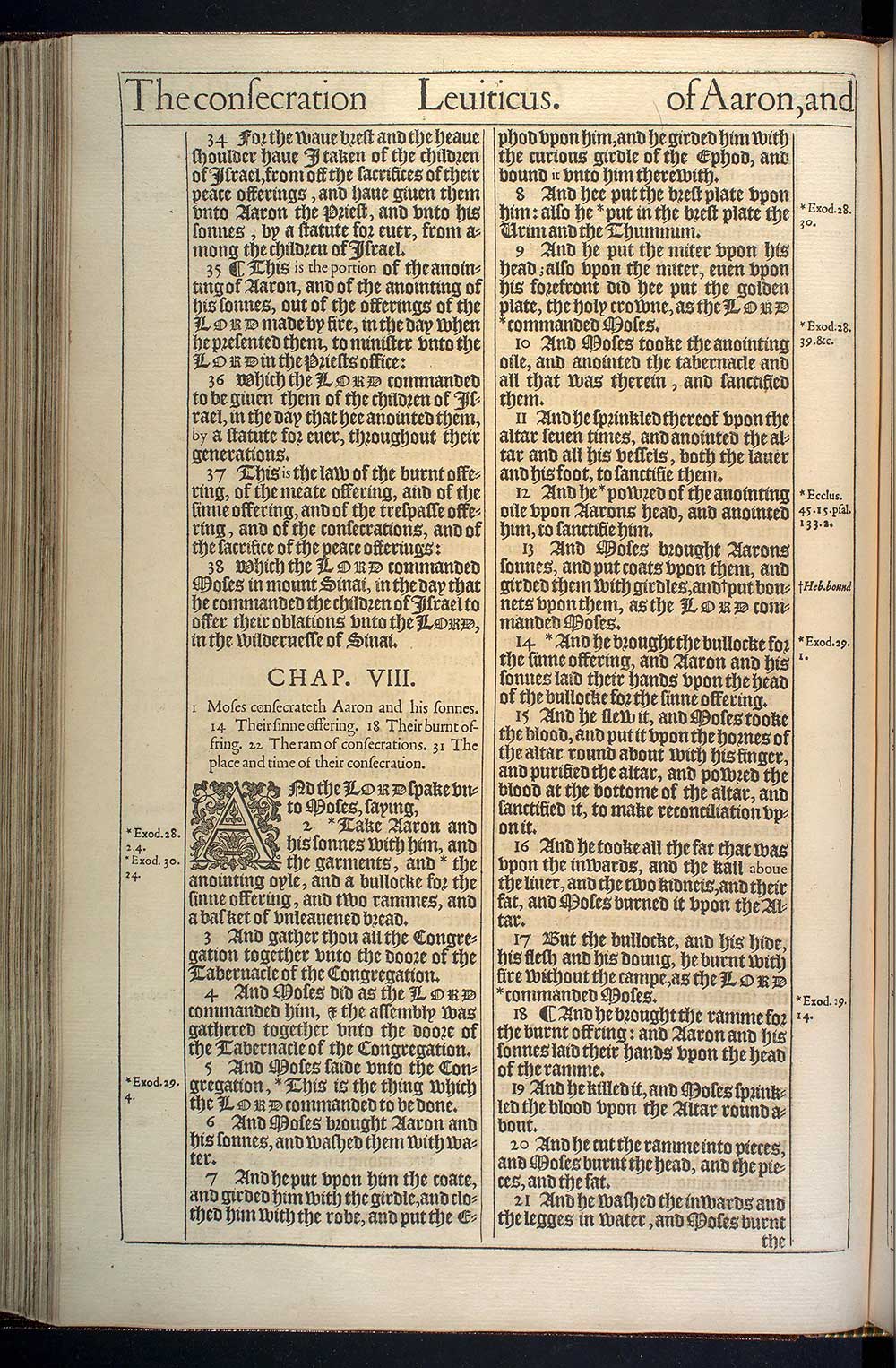 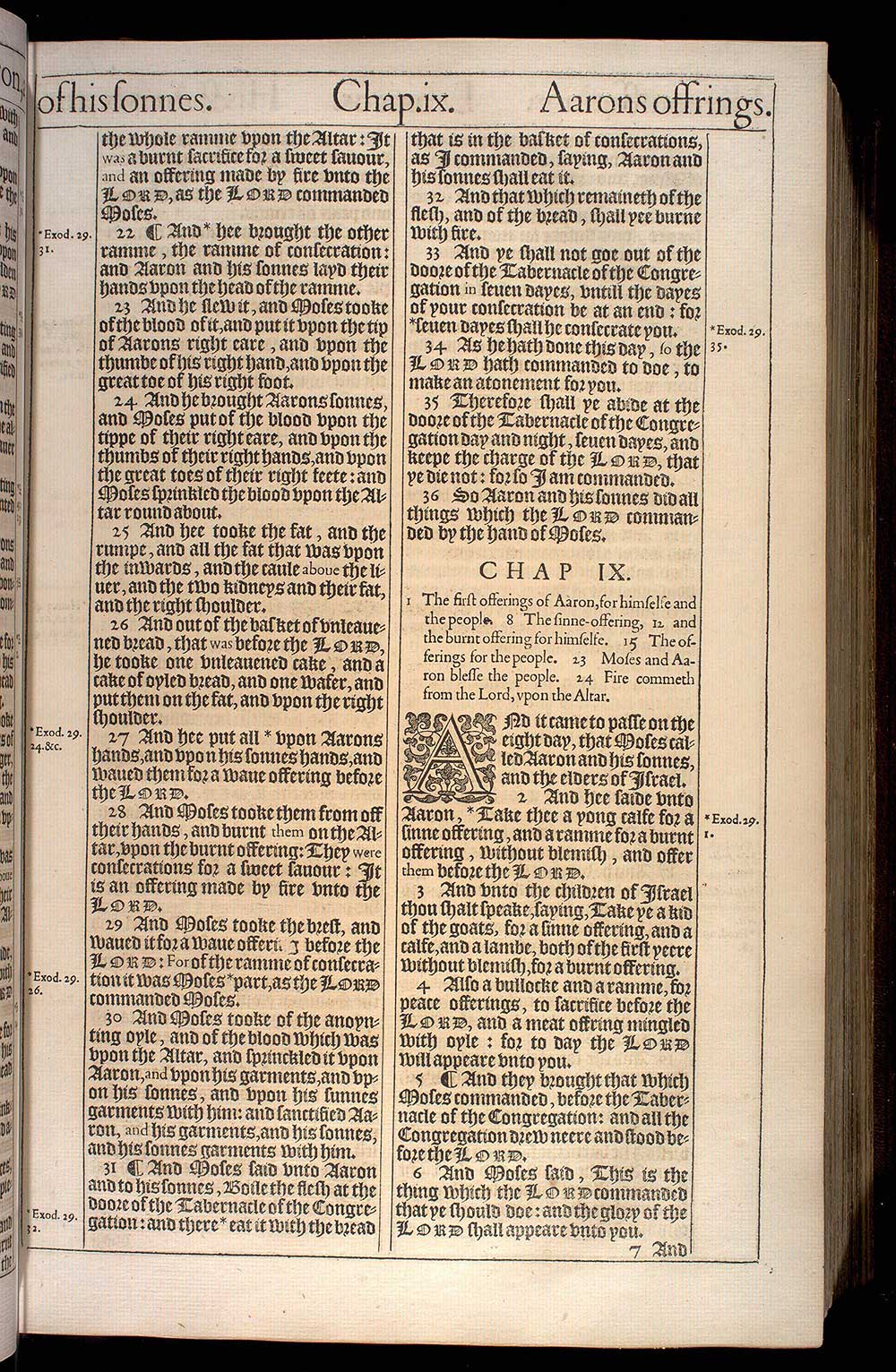 1 Moses consecrateth Aaron and his sonnes. 14 Their sinne offering. 18 Their burnt offring. 22 The ram of consecrations. 31 The place and time of their consecration.

2Take Aaron and his sonnes with him, and the garments, and the anointing oyle, and a bullocke for the sinne offering, and two rammes, and a basket of vnleauened bread.2

4And Moses did as the Lord commanded him, & the assembly was gathered together vnto the doore of the Tabernacle of the Congregation.

5And Moses saide vnto the Congregation, This is the thing which the Lord commanded to be done.5

6And Moses brought Aaron and his sonnes, and washed them with water.

9And he put the miter vpon his head; also vpon the miter, euen vpon his forefront did hee put the golden plate, the holy crowne, as the Lord commanded Moses.9

10And Moses tooke the anointing oile, and anointed the tabernacle and all that was therein, and sanctified them.

11And he sprinkled thereof vpon the altar seuen times, and anointed the altar and all his vessels, both the lauer and his foot, to sanctifie them.

12And he powred of the anointing oile vpon Aarons head, and anointed him, to sanctifie him.12

16And he tooke all the fat that was vpon the inwards, and the kall aboue the liuer, and the two kidneis, and their fat, and Moses burned it vpon the Altar.

17But the bullocke, and his hide, his flesh and his doung, he burnt with fire without the campe, as the Lord commanded Moses.17

18¶ And he brought the ramme for the burnt offring: and Aaron and his sonnes laid their hands vpon the head of the ramme.

19And he killed it, and Moses sprinkled the blood vpon the Altar round about.

21And he washed the inwards and the legges in water, and Moses burnt the whole ramme vpon the Altar: It was a burnt sacrifice for a sweet sauour, and an offering made by fire vnto the Lord, as the Lord commanded Moses.

22¶ And hee brought the other ramme, the ramme of consecration: and Aaron and his sonnes layd their hands vpon the head of the ramme.22

25And hee tooke the fat, and the rumpe, and all the fat that was vpon the inwards, and the caule aboue the liuer, and the two kidneys and their fat, and the right shoulder.

26And out of the basket of vnleauened bread, that was before the Lord, he tooke one vnleauened cake, and a cake of oyled bread, and one wafer, and put them on the fat, and vpon the right shoulder.

27And hee put all vpon Aarons hands, and vpon his sonnes hands, and waued them for a waue offering before the Lord.27

28And Moses tooke them from off their hands, and burnt them on the Altar, vpon the burnt offering: They were consecrations for a sweet sauour: It is an offering made by fire vnto the Lord.

29And Moses tooke the brest, and waued it for a waue offering before the Lord: For of the ramme of consecration it was Moses part, as the Lord commanded Moses.29

31¶ And Moses said vnto Aaron and to his sonnes, Boile the flesh at the doore of the Tabernacle of the Congregation: and there eat it with the bread that is in the basket of consecrations, as I commanded, saying, Aaron and his sonnes shall eat it.31

32And that which remaineth of the flesh, and of the bread, shall yee burne with fire.

33And ye shall not goe out of the doore of the Tabernacle of the Congregation in seuen dayes, vntill the dayes of your consecration be at an end: for seuen dayes shall he consecrate you.33

34As he hath done this day, so the Lord hath commanded to doe, to make an atonement for you.

35Therefore shall ye abide at the doore of the Tabernacle of the Congregation day and night, seuen dayes, and keepe the charge of the Lord, that ye die not: for so I am commanded.

36So Aaron and his sonnes did all things which the Lord commanded by the hand of Moses.