King James I of England 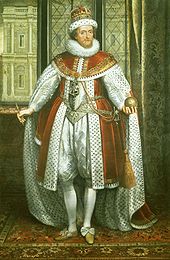 The Established Church was divided during this era. In 1603, King James called a conference in the Hampton Court in attempt to resolve issues. As a result, a new translation and compilation of approved books of the Bible was commissioned to resolve issues with translations then being used. For example, the Geneva Version contained controversial marginal notes that proclaimed the Pope as an anti-Christ. The leaders of the church desired a Bible for the people, with scriptural references only for word clarification or cross-references.

King James approved 54 scholars to work on the translation, and 47 worked in six groups at three locations for seven years, comparing to previous English translations (such as the Geneva Bible) and texts in the original languages. The new translation was published in 1611 and called the Authorized Version, because it was authorized to be read in the churches. It later became known as the King James Version.

The King James translation had a significant influence on the English language and was widely accepted as the standard English Bible. Because of the project being overseen by King James and the care and precise attention to detail during this seven-year translation, the King James Bible was considered one of the most accurate translations in existance.

As the English language evolved, the grammar and wording was updated in 1769 to be more easily read for that time. This is the translation used on this website.