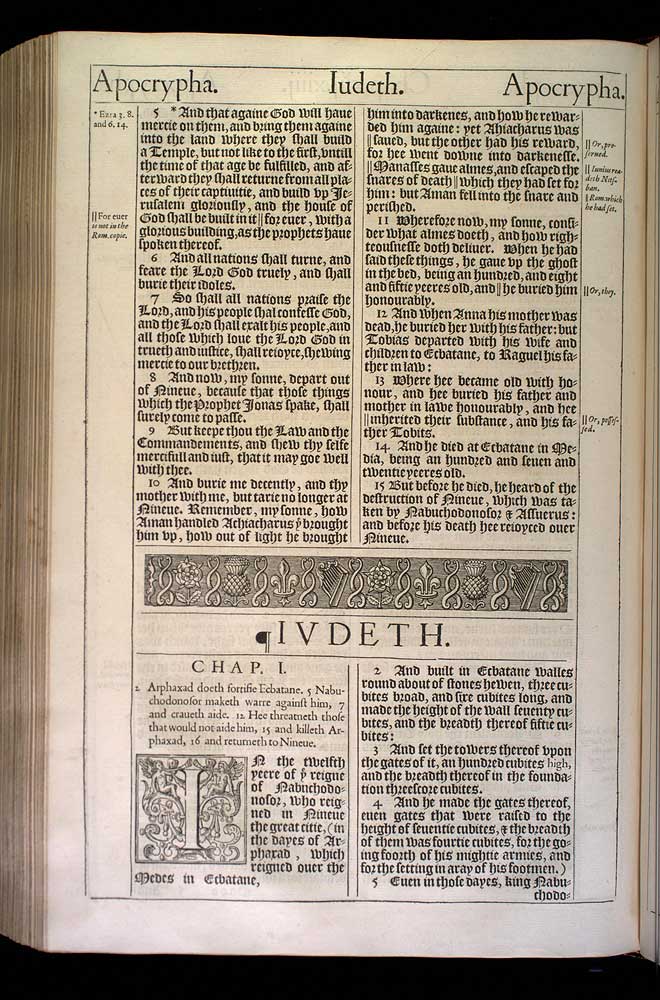 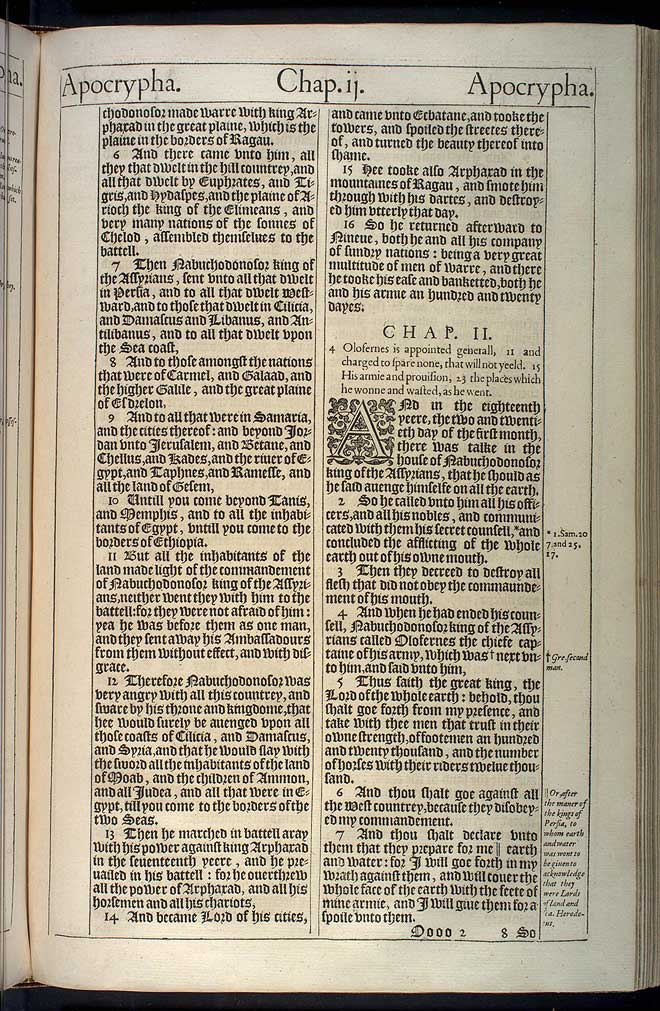 View this Iudeth chapter 1 scan at a larger size

2 Arphaxad doeth fortifie Ecbatane. 5 Nabuchodonosor maketh warre against him, 7 and craueth aide. 12 Hee threatneth those that would not aide him, 15 and killeth Arphaxad, 16 and returneth to Nineue.

1 In the twelfth yeere of þe reigne of Nabuchodonosor, who reigned in Nineue the great citie, (in the dayes of Arphaxad, which reigned ouer the Medes in Ecbatane,

3 And set the towers thereof vpon the gates of it, an hundred cubites high, and the breadth thereof in the foundation threescore cubites.

4 And he made the gates thereof, euen gates that were raised to the height of seuentie cubites, & the breadth of them was fourtie cubites, for the going foorth of his mightie armies, and for the setting in aray of his footmen.)

5 Euen in those dayes, king Nabuchodonosor made warre with king Arphaxad in the great plaine, which is the plaine in the borders of Ragau.

6 And there came vnto him, all they that dwelt in the hill countrey, and all that dwelt by Euphrates, and Tigris, and Hydaspes, and the plaine of Arioch the king of the Elimeans, and very many nations of the sonnes of Chelod, assembled themselues to the battell.

8 And to those amongst the nations that were of Carmel, and Galaad, and the higher Galile, and the great plaine of Esdrelon,

9 And to all that were in Samaria, and the cities thereof: and beyond Iordan vnto Ierusalem, and Betane, and Chellus, and Kades, and the riuer of Egypt, and Taphnes, and Ramesse, and all the land of Gesem,

11 But all the inhabitants of the land made light of the commandement of Nabuchodonosor king of the Assyrians, neither went they with him to the battell: for they were not afraid of him: yea he was before them as one man, and they sent away his Ambassadours from them without effect, and with disgrace.

12 Therefore Nabuchodonosor was very angry with all this countrey, and sware by his throne and kingdome, that hee would surely be auenged vpon all those coasts of Cilicia, and Damascus, and Syria, and that he would slay with the sword all the inhabitants of the land of Moab, and the children of Ammon, and all Iudea, and all that were in Egypt, till you come to the borders of the two Seas.

13 Then he marched in battell aray with his power against king Arphaxad in the seuenteenth yeere, and he preuailed in his battell: for he ouerthrew all the power of Arphaxad, and all his horsemen and all his chariots,

14 And became Lord of his cities, and came vnto Ecbatane, and tooke the towers, and spoiled the streetes thereof, and turned the beauty thereof into shame.

15 Hee tooke also Arphaxad in the mountaines of Ragau, and smote him through with his dartes, and destroyed him vtterly that day.

16 So he returned afterward to Nineue, both he and all his company of sundry nations: being a very great multitude of men of warre, and there he tooke his ease and banketted, both he and his armie an hundred and twenty dayes.