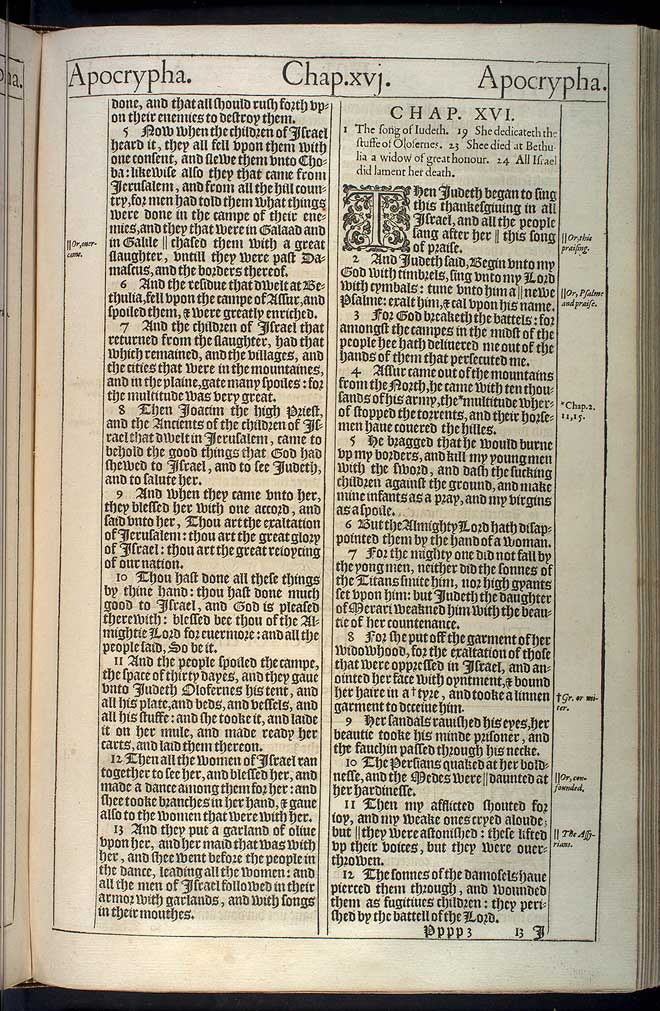 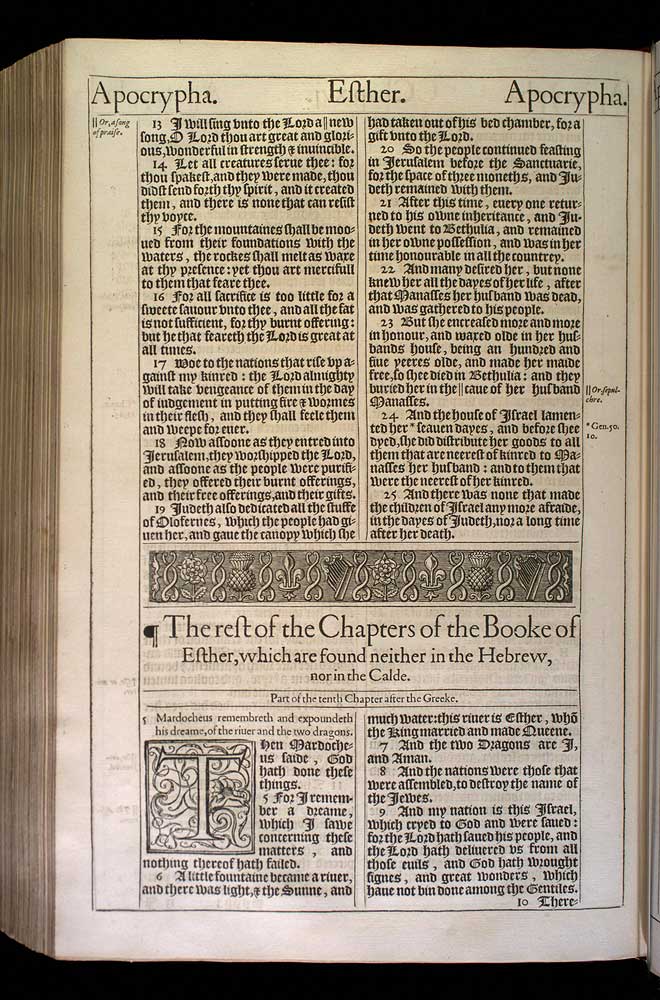 View this Iudeth chapter 16 scan at a larger size

1 The song of Iudeth. 19 She dedicateth the stuffe of Olofernes. 23 Shee died at Bethulia a widow of great honour. 24 All Israel did lament her death.

1 Then Iudeth began to sing this thankesgiuing in all Israel, and all the people sang after her this song of praise.1

2 And Iudeth said, Begin vnto my God with timbrels, sing vnto my Lord with cymbals: tune vnto him a newe Psalme: exalt him, & cal vpon his name.2

3 For God breaketh the battels: for amongst the campes in the midst of the people hee hath deliuered me out of the hands of them that persecuted me.

4 Assur came out of the mountains from the North, he came with ten thousands of his army, the multitude wherof stopped the torrents, and their horsemen haue couered the hilles.4

5 He bragged that he would burne vp my borders, and kill my young men with the sword, and dash the sucking children against the ground, and make mine infants as a pray, and my virgins as a spoile.

6 But the Almighty Lord hath disappointed them by the hand of a woman.

7 For the mighty one did not fall by the yong men, neither did the sonnes of the Titans smite him, nor high gyants set vpon him: but Iudeth the daughter of Merari weakned him with the beautie of her countenance.

8 For she put off the garment of her widowhood, for the exaltation of those that were oppressed in Israel, and anointed her face with oyntment, & bound her haire in a tyre, and tooke a linnen garment to deceiue him.8

9 Her sandals rauished his eyes, her beautie tooke his minde prisoner, and the fauchin passed through his necke.

10 The Persians quaked at her boldnesse, and the Medes were daunted at her hardinesse.10

11 Then my afflicted shouted for ioy, and my weake ones cryed aloude; but they were astonished: these lifted vp their voices, but they were ouerthrowen.11

12 The sonnes of the damosels haue pierced them through, and wounded them as fugitiues children: they perished by the battell of the Lord.

13 I will sing vnto the Lord a new song, O Lord thou art great and glorious, wonderful in strength & inuincible.13

14 Let all creatures serue thee: for thou spakest, and they were made, thou didst send forth thy spirit, and it created them, and there is none that can resist thy voyce.

15 For the mountaines shall be mooued from their foundations with the waters, the rockes shall melt as waxe at thy presence: yet thou art mercifull to them that feare thee.

16 For all sacrifice is too little for a sweete sauour vnto thee, and all the fat is not sufficient, for thy burnt offering: but he that feareth the Lord is great at all times.

17 Woe to the nations that rise vp against my kinred: the Lord almighty will take vengeance of them in the day of iudgement in putting fire & wormes in their flesh, and they shall feele them and weepe for euer.

19 Iudeth also dedicated all the stuffe of Olofernes, which the people had giuen her, and gaue the canopy which she had taken out of his bed chamber, for a gift vnto the Lord.

20 So the people continued feasting in Ierusalem before the Sanctuarie, for the space of three moneths, and Iudeth remained with them.

21 After this time, euery one returned to his owne inheritance, and Iudeth went to Bethulia, and remained in her owne possession, and was in her time honourable in all the countrey.

22 And many desired her, but none knew her all the dayes of her life, after that Manasses her husband was dead, and was gathered to his people.

23 But she encreased more and more in honour, and waxed olde in her husbands house, being an hundred and fiue yeeres olde, and made her maide free, so shee died in Bethulia: and they buried her in the caue of her husband Manasses.23

24 And the house of Israel lamented her seauen dayes, and before shee dyed, she did distribute her goods to all them that are neerest of kinred to Manasses her husband: and to them that were the neerest of her kinred.24

25 And there was none that made the children of Israel any more afraide, in the dayes of Iudeth, nor a long time after her death.