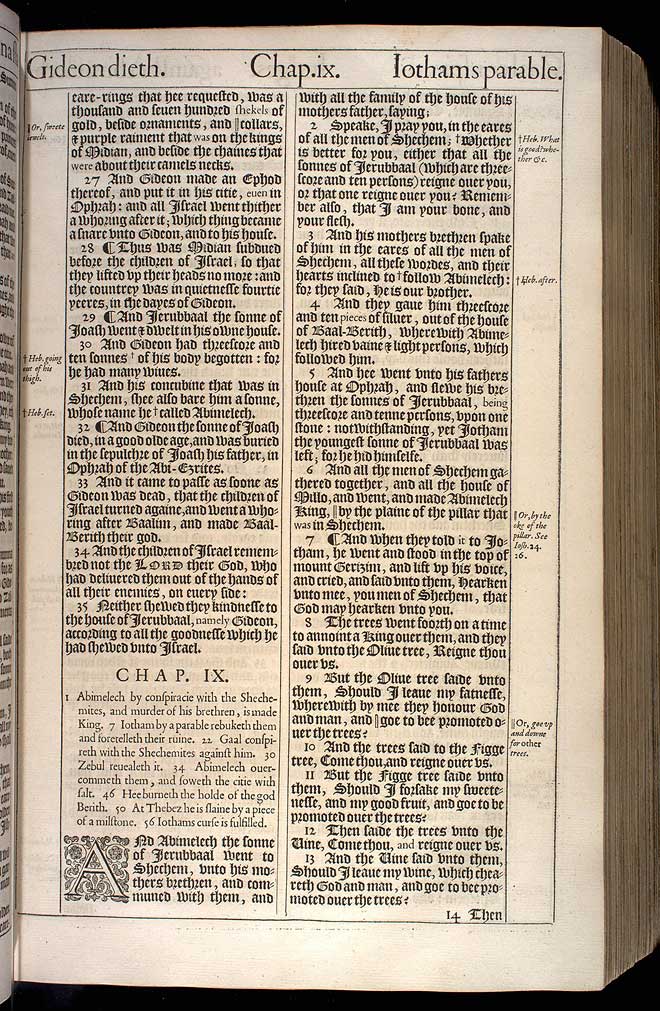 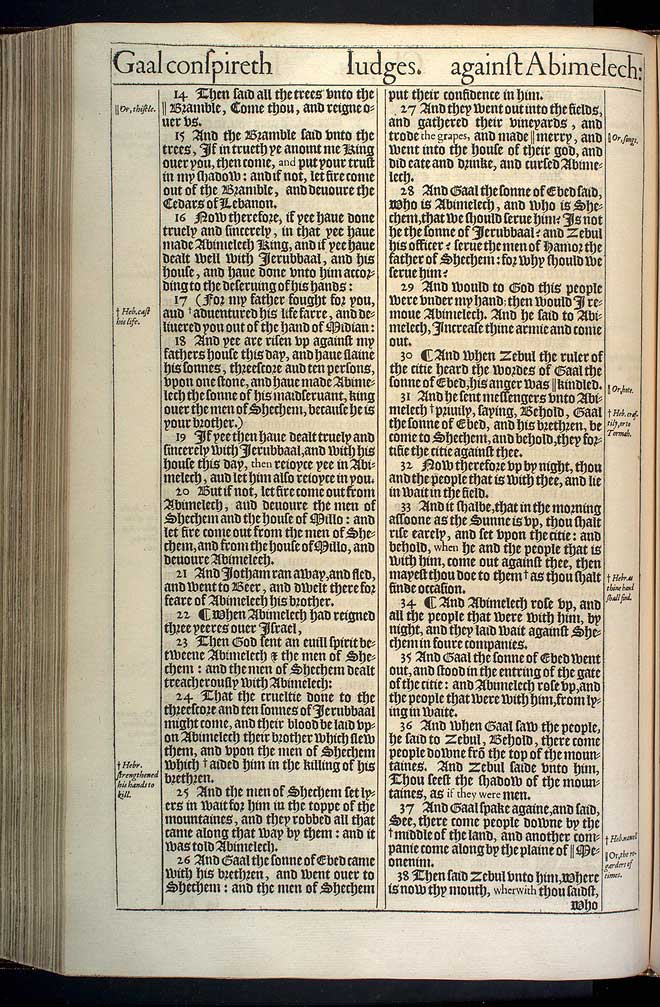 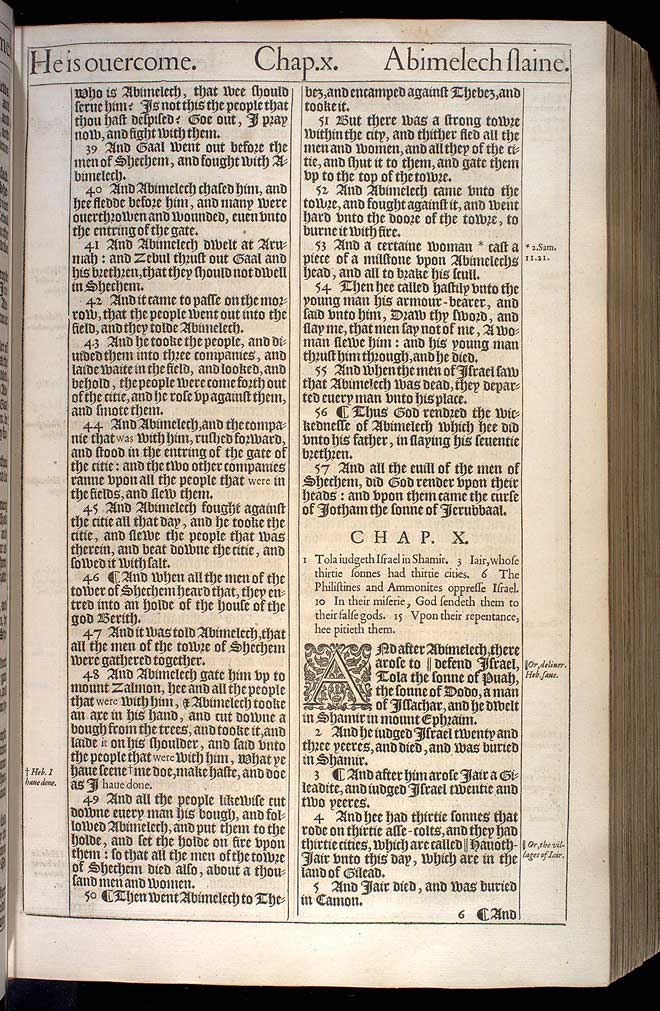 View this Iudges chapter 9 scan at a larger size

1 Abimelech by conspiracie with the Shechemites, and murder of his brethren, is made King. 7 Iotham by a parable rebuketh them and foretelleth their ruine. 22 Gaal conspireth with the Shechemites against him. 30 Zebul reuealeth it. 34 Abimelech ouercommeth them, and soweth the citie with salt. 46 Hee burneth the holde of the god Berith. 50 At Thebez he is slaine by a piece of a milstone. 56 Iothams curse is fulfilled.

1 And Abimelech the sonne of Ierubbaal went to Shechem, vnto his mothers brethren, and communed with them, and with all the family of the house of his mothers father, saying;

2 Speake, I pray you, in the eares of all the men of Shechem; Whether is better for you, either that all the sonnes of Ierubbaal (which are threescore and ten persons) reigne ouer you, or that one reigne ouer you? Remember also, that I am your bone, and your flesh.2

3 And his mothers brethren spake of him in the eares of all the men of Shechem, all these wordes, and their hearts inclined to follow Abimelech: for they said, He is our brother.3

4 And they gaue him threescore and ten pieces of siluer, out of the house of Baal-Berith, wherewith Abimelech hired vaine & light persons, which followed him.

5 And hee went vnto his fathers house at Ophrah, and slewe his brethren the sonnes of Ierubbaal, being threescore and tenne persons, vpon one stone: notwithstanding, yet Iotham the youngest sonne of Ierubbaal was left; for he hid himselfe.

6 And all the men of Shechem gathered together, and all the house of Millo, and went, and made Abimelech King, by the plaine of the pillar that was in Shechem.6

7 ¶ And when they told it to Iotham, he went and stood in the top of mount Gerizim, and lift vp his voice, and cried, and said vnto them, Hearken vnto mee, you men of Shechem, that God may hearken vnto you.

8 The trees went foorth on a time to annoint a King ouer them, and they said vnto the Oliue tree, Reigne thou ouer vs.

9 But the Oliue tree saide vnto them, Should I leaue my fatnesse, wherewith by mee they honour God and man, and goe to bee promoted ouer the trees?9

10 And the trees said to the Figge tree, Come thou, and reigne ouer vs.

11 But the Figge tree saide vnto them, Should I forsake my sweetenesse, and my good fruit, and goe to be promoted ouer the trees?

12 Then saide the trees vnto the Uine, Come thou, and reigne ouer vs.

13 And the Uine said vnto them, Should I leaue my wine, which cheareth God and man, and goe to bee promoted ouer the trees?

14 Then said all the trees vnto the Bramble, Come thou, and reigne ouer vs.14

15 And the Bramble said vnto the trees, If in trueth ye anoint me King ouer you, then come, and put your trust in my shadow: and if not, let fire come out of the Bramble, and deuoure the Cedars of Lebanon.

16 Now therefore, if yee haue done truely and sincerely, in that yee haue made Abimelech King, and if yee haue dealt well with Ierubbaal, and his house, and haue done vnto him according to the deseruing of his hands:

17 (For my father fought for you, and aduentured his life farre, and deliuered you out of the hand of Midian:17

18 And yee are risen vp against my fathers house this day, and haue slaine his sonnes, threescore aud ten persons, vpon one stone, and haue made Abimelech the sonne of his maidseruant, king ouer the men of Shechem, because he is your brother.)

19 If yee then haue dealt truely and sincerely with Ierubbaal, and with his house this day, then reioyce yee in Abimelech, aud let him also reioyce in you.

21 And Iotham ran away, and fled, and went to Beer, and dwelt there for feare of Abimeleeh his brother.

24 That the crueltie done to the threescore and ten sonnes of Ierubbaal might come, and their blood be laid vpon Abimelech their brother which slew them, and vpon the men of Shechem which aided him in the killing of his brethren.24

25 And the men of Shechem set lyers in wait for him in the toppe of the mountaines, and they robbed all that came along that way by them: and it was told Abimelech.

26 And Gaal the sonne of Ebed came with his brethren, and went ouer to Shechem: and the men of Shechem put their confidence in him.

27 And they went out into the fields, and gathered their vineyards, and trode the grapes, and made merry, and went into the house of their god, and did eate and drinke, and cursed Abimelech.27

28 And Gaal the sonne of Ebed said, Who is Abimelech, and who is Shechem, that we should serue him? Is not he the sonne of Ierubbaal? and Zebul his officer? serue the men of Hamor the father of Shechem: for why should we serue him?

29 And would to God this people were vnder my hand; then would I remoue Abimelech. And he said to Abimelech, Increase thine armie and come out.

30 ¶ And when Zebul the ruler of the citie heard the wordes of Gaal the sonne of Ebed, his anger was kindled.30

31 And he sent messengers vnto Abimelech priuily, saying, Behold, Gaal the sonne of Ebed, and his brethren, be come to Shechem, and behold, they fortifie the citie against thee.31

32 Now therefore vp by night, thou and the people that is with thee, and lie in wait in the field.

33 And it shalbe, that in the morning assoone as the Sunne is vp, thou shalt rise earely, and set vpon the citie: and behold, when he and the people that is with him, come out against thee, then mayest thou doe to them as thou shalt finde occasion.33

34 ¶ And Abimelech rose vp, and all the people that were with him, by night, and they laid wait against Shechem in foure companies.

35 And Gaal the sonne of Ebed went out, and stood in the entring of the gate of the citie: and Abimelech rose vp, and the people that were with him, from lying in waite.

36 And when Gaal saw the people, he said to Zebul, Behold, there come people downe frō the top of the mountaines. And Zebul saide vnto him, Thou seest the shadow of the mountaines, as if they were men.

37 And Gaal spake againe, and said, See, there come people downe by the middle of the land, and another companie come along by the plaine of Meonenim.37

38 Then said Zebul vnto him, Where is now thy mouth, wherwith thou saidst, Who is Abimelech, that wee should serue him? Is not this the people that thou hast despised? Goe out, I pray now, and fight with them.

39 And Gaal went out before the men of Shechem, and fought with Abimelech.

40 And Abimelech chased him, and hee fledde before him, and many were ouerthrowen and wounded, euen vnto the entring of the gate.

41 And Abimelech dwelt at Arumah: and Zebul thrust out Gaal and his brethren, that they should not dwell in Shechem.

42 And it came to passe on the morrow, that the people went out into the field, and they tolde Abimelech.

43 And he tooke the people, and diuided them into three companies, and laide waite in the field, and looked, and behold, the people were come forth out of the citie, and he rose vp against them, and smote them.

44 And Abimelech, and the companie that was with him, rushed forward, and stood in the entring of the gate of the citie: and the two other companies ranne vpon all the people that were in the fields, and slew them.

46 ¶ And when all the men of the tower of Shechem heard that, they entred into an holde of the house of the god Berith.

47 And it was told Abimelech, that all the men of the towre of Shechem were gathered together.

49 And all the people likewise cut downe euery man his bough, and followed Abimelech, and put them to the holde, and set the holde on fire vpon them: so that all the men of the towre of Shechem died also, about a thousand men and women.

51 But there was a strong towre within the city, and thither fled all the men and women, and all they of the citie, and shut it to them, and gate them vp to the top of the towre.

52 And Abimelech came vnto the towre, and fought against it, and went hard vnto the doore of the towre, to burne it with fire.

53 And a certaine woman cast a piece of a milstone vpon Abimelechs head, and all to brake his scull.53

54 Then hee called hastily vnto the young man his armour-bearer, and said vnto him, Draw thy sword, and slay me, that men say not of me, A woman slewe him: and his young man thrust him through, and he died.

55 And when the men of Israel saw that Abimelech was dead, they departed euery man vnto his place.

56 ¶ Thus God rendred the wickednesse of Abimelech which hee did vnto his father, in slaying his seuentie brethren.

57 And all the euill of the men of Shechem, did God render vpon their heads: and vpon them came the curse of Iotham the sonne of Ierubbaal.