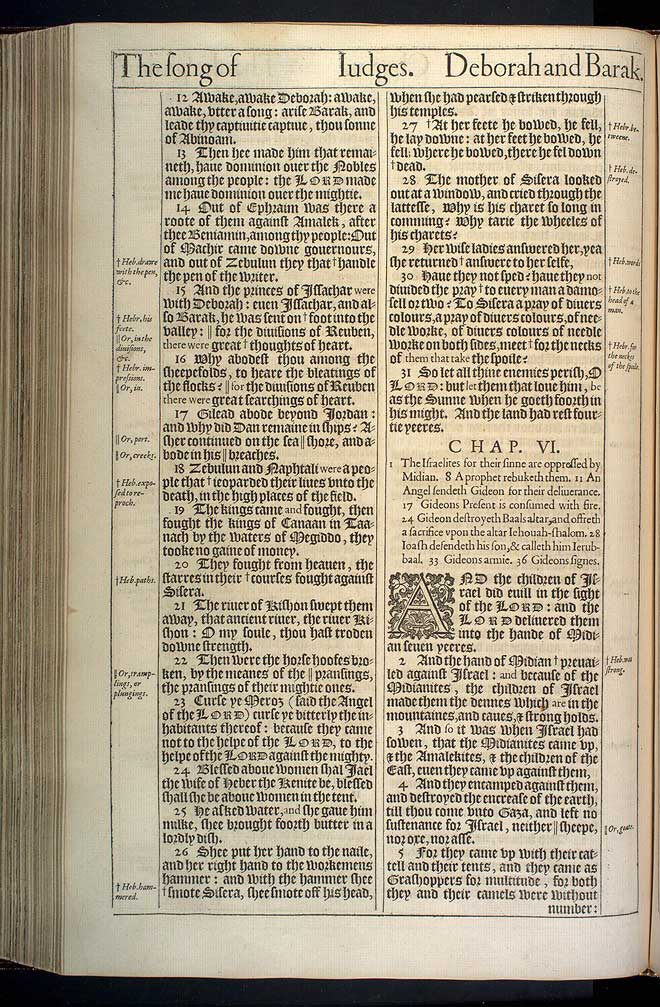 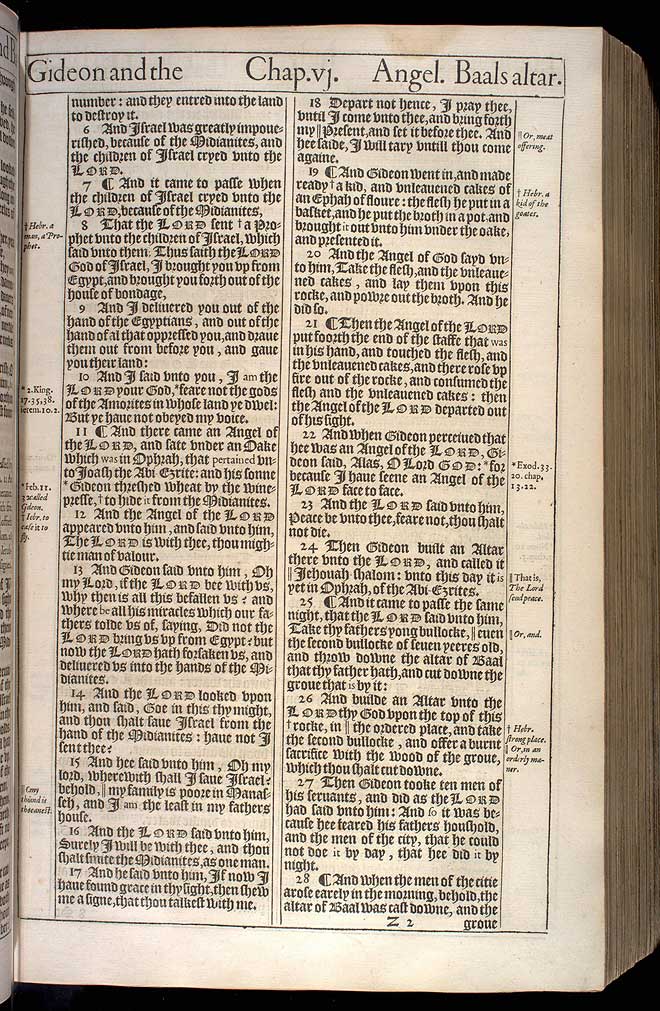 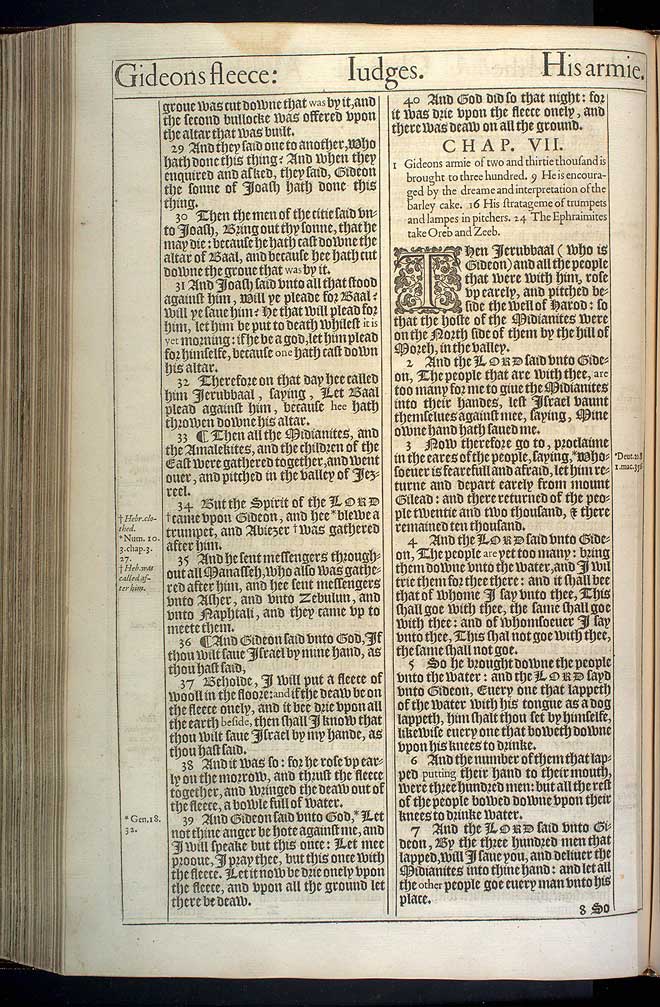 View this Iudges chapter 6 scan at a larger size

1 The Israelites for their sinne are oppressed by Midian. 8 A prophet rebuketh them. 11 An Angel sendeth Gideon for their deliuerance. 17 Gideons Present is consumed with fire. 24 Gideon destroyeth Baals altar, and offreth a sacrifice vpon the altar Iehouah-shalom. 28 Ioash defendeth his son, & calleth him Ierubbaal. 33 Gideons armie. 36 Gideons signes.

1 And the children of Israel did euill in the sight of the Lord: and the Lord deliuered them into the hande of Midian seuen yeeres.

2 And the hand of Midian preuailed against Israel: and because of the Midianites, the children of Israel made them the dennes which are in the mountaines, and caues, & strong holds.2

3 And so it was when Israel had sowen, that the Midianites came vp, & the Amalekites, & the children of the East, euen they came vp against them,

4 And they encamped against them, and destroyed the encrease of the earth, till thou come vnto Gaza, and left no sustenance for Israel, neither sheepe, nor oxe, nor asse.4

5 For they came vp with their cattell and their tents, and they came as Grashoppers for multitude, for both they and their camels were without number: and they entred into the land to destroy it.

6 And Israel was greatly impouerished, because of the Midianites, and the children of Israel cryed vnto the Lord.

7 ¶ And it came to passe when the children of Israel cryed vnto the Lord, because of the Midianites,

8 That the Lord sent a Prophet vnto the children of Israel, which said vnto them; Thus saith the Lord God of Israel, I brought you vp from Egypt, and brought you forth out of the house of bondage,8

10 And I said vnto you, I am the Lord your God, feare not the gods of the Amorites in whose land ye dwel: But ye haue not obeyed my voice.10

11 ¶ And there came an Angel of the Lord, and sate vnder an Oake which was in Ophrah, that pertained vnto Ioash the Abi-Ezrite: and his sonne Gideon threshed wheat by the winepresse, to hide it from the Midianites.11

12 And the Angel of the Lord appeared vnto him, and said vnto him, The Lord is with thee, thou mightie man of valour.

13 And Gideon said vnto him, Oh my Lord, if the Lord bee with vs, why then is all this befallen vs? and where be all his miracles which our fathers tolde vs of, saying, Did not the Lord bring vs vp from Egypt? But now the Lord hath forsaken vs, and deliuered vs into the hands of the Midianites.

14 And the Lord looked vpon him, and said, Goe in this thy might, and thou shalt saue Israel from the hand of the Midianites: haue not I sent thee?

15 And hee said vnto him, Oh my lord, wherewith shall I saue Israel? behold, my family is poore in Manasseh, and I am the least in my fathers house.15

16 And the Lord said vnto him, Surely I will be with thee, and thou shalt smite the Midianites, as one man.

17 And he said vnto him, If now I haue found grace in thy sight, then shew me a signe, that thou talkest with me.

18 Depart not hence, I pray thee, vntil I come vnto thee, and bring forth my Present, and set it before thee. And hee saide, I will tary vntill thou come againe.18

19 ¶ And Gideon went in, and made ready a kid, and vnleauened cakes of an Ephah of floure: the flesh he put in a basket, and he put the broth in a pot, and brought it out vnto him vnder the oake, and presented it.19

20 And the Angel of God sayd vnto him, Take the flesh, and the vnleauened cakes, and lay them vpon this rocke, and powre out the broth. And he did so.

23 And the Lord said vnto him, Peace be vnto thee, feare not, thou shalt not die.

24 Then Gideon built an Altar there vnto the Lord, and called it Iehouah shalom: vnto this day it is yet in Ophrah, of the Abi-Ezrites.24

25 ¶ And it came to passe the same night, that the Lord said vnto him, Take thy fathers yong bullocke, euen the second bullocke of seuen yeeres old, and throw downe the altar of Baal that thy father hath, and cut downe the groue that is by it:25

26 And builde an Altar vnto the Lord thy God vpon the top of this rocke, in the ordered place, and take the second bullocke, and offer a burnt sacrifice with the wood of the groue, which thou shalt cut downe.26

27 Then Gideon tooke ten men of his seruants, and did as the Lord had said vnto him: And so it was because hee feared his fathers houshold, and the men of the city, that he could not doe it by day, that hee did it by night.

28 ¶ And when the men of the citie arose earely in the morning, behold, the altar of Baal was cast downe, and the groue was cut downe that was by it, and the second bullocke was offered vpon the altar that was built.

30 Then the men of the citie said vnto Ioash, Bring out thy sonne, that he may die: because he hath cast downe the altar of Baal, and because hee hath cut downe the groue that was by it.

31 And Ioash said vnto all that stood against him, Will ye pleade for Baal? will ye saue him? He that will plead for him, let him be put to death whilest it is yet morning: if he be a god, let him plead for himselfe, because one hath cast down his altar.

32 Therefore on that day hee called him Ierubbaal, saying, Let Baal plead against him, because hee hath throwen downe his altar.

33 ¶ Then all the Midianites, and the Amalekites, and the children of the East were gathered together, and went ouer, and pitched in the valley of Iezreel.

34 But the Spirit of the Lord came vpon Gideon, and hee blewe a trumpet, and Abiezer was gathered after him.34

36 ¶ And Gideon said vnto God, If thou wilt saue Israel by mine hand, as thou hast said,

37 Beholde, I will put a fleece of wooll in the floore: and if the deaw be on the fleece onely, and it bee drie vpon all the earth beside, then shall I know that thou wilt saue Israel by my hande, as thou hast said.

38 And it was so: for he rose vp early on the morrow, and thrust the fleece together, and wringed the deaw out of the fleece, a bowle full of water.

39 And Gideon said vnto God, Let not thine anger be hote against me, and I will speake but this once: Let mee prooue, I pray thee, but this once with the fleece. Let it now be drie onely vpon the fleece, and vpon all the ground let there be deaw.39

40 And God did so that night: for it was drie vpon the fleece onely, and there was deaw on all the ground.